Too many people out there are ignorantly expressing opinions about Veterans and PTSD, with no understanding of either. The PTSD situation is severe and it isn’t getting better.
A big component to this is a Soldier’s sense of value, or Self Worth. Because of their negative treatment by a large population of this country and the media, and then they hear things pop up by A-Holes like Ted Turner, they are questioning their sacrifices, and time spent over in the war zones. They are weighing that against their own internal moral, ethical, and spiritual standards. Depression, Mark of Cain Syndrome, Survivor’s Guilt, Shame of a secret failure that may or may not be real. (that they let their team down)
PTSD is a deeply complicated issue. And to make the matters worse, those that seek help are made out to be villains… they lose rights… they are shunned. Sometimes police are called, guns are confiscated, houses searched, One Vet was actually raided. I’ve had contact with some Vets who have sought help who then were denied gun purchase by BCI. (Not Utah) This is not right. This isn’t how we do this. A Vet that talks to a Doc about nightmares is not a Monster about to burst his chains.
At best our Vets are treated by mental health professionals who have no understanding of Combat PTSD, because they can’t relate, being liberal minded cake eaters with no understanding of the military. I know first hand because when I was pursuing a Psychology Degree, I had to argue with students and professors that being a Rape Victim, while horrible, is not the same thing as a Veteran who put his rifle sights on another human being and pulled the trigger. It’s different. The scars inside are different. The girl that got raped didn’t volunteer for it, didn’t chose to get raped. Our Vets volunteered, they went into harms way and they chose to fight and these choices are now conflicting with their beliefs, be it Moral or Spiritual… and they come home and are then filled with more doubt about their sacrifices and self worth and no one is helping them. The Mental Health Profession isn’t geared to help Combat Veterans or Police Officers who suffer from Combat Related PTSD. There are only a very small handful of Psychologists who understand Combat PTSD. Because they have been there themselves. Others just Empathize and say they do, but they really and truly don’t and treat all PTSD the same. It isn’t. The scars are different… the layers and depths are different.
Some Vets come home to good communities and good support from friends and family and these guys are okay. They may have some nightmares but they eventually pass. These guys have that safety net of people who love and respect them.
But others don’t. They come home to people who hate them for their service. Who question them. Treat them differently. And these people really have no where to turn for just simple understanding. These guys are the ones that are most vulnerable and need the most help, and they are the ones more often than not, not getting it.
These are Good Men and Good Women. These are people who put it all on the line for us and more often than not they just need to be treated like they are normal Guys and Gals again. Even if they have a disability, physical scars… They are still our Nation’s Finest.

And then Ted Turner goes and says they should commit suicide. My anger at Ted Turner is vibrant. Therw should be repercussions to what he said.

At first the Administration didn’t know anything.  Then they tried to point fingers at an Internet Movie.  Then they didn’t know anything again.  Then they only found out too late.  Well, now it seems that not only did they know, but they watched it happen live.  Not only that but it is rumored that they actually told US Asssets to Stand Down.  So not only did they watch it – but they wanted it to happen.  Much as surfaced about the Benghazi attack.  All the truth will eventually come out.

If Obama really did order CIA and Marine Assets to Stand Down, as has been reported, then it is clear that Obama actually did want those men to die.  Specifically the Ambassador.
So my question is this.

Why did Obama want U.S. Ambassador Christopher Stevens to die? The other men were just collateral damage in this. But Obama chose to let Stevens die… he wanted him to die.
Why?
That’s what I want answered.

Because the POTUS doing what he did… Ordering the Marines to NOT follow their standing orders, to thrice deny CIA requests to go in. These were active decisions to let Stevens die. What did Stevens do? What did Stevens know? It had to be something very horrible… because otherwise Obama has basically sentenced the man to die and then watched it happen. He might not of pulled the trigger himself, but he ordered it. This is most un-presidential and he needs to be held accountable for it. 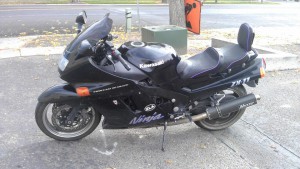 I hate this. I seriously do love this bike but I’ve finally accepted that my leg is not going to let me ride it anymore. Last time I rode it to work, it hurt far too much. After a long day on my feet, the ride home and the cold combined to put me into physical shock from the pain. I have a very unusually high pain tolerance level, and this was beyond it. I made it home, got the kickstand down, and damn near fell off the bike.
I just can’t ride it anymore.  I love this motorcycle and it’s going to kill me to see it go.  But I just can’t do a Sports Bike anymore.

I will entertain reasonable offers for sale, but would prefer trade for another motorcycle such as a Cruiser with a fat engine and more importantly, forward foot controls.

Obama is so full of it, it would be hilarious if it wasn’t for the fact that he was our President.
His asinine remark about Horses and Bayonets reminded me of a few things. We still use Horses in the Army. A lot of them. Facebook is full of pictures of US Soldiers on Horses in the War Zone. Because nothing is better for rugged mountain patrols than horses.
The latest issue of Guns Magazine (December 2012) page 33, shows an advertisement for US PALM. In this ad it shows a rugged looking cowboy with three grunts behind him, all on horseback. The Cowboy is the senior trainer for the Arizona Cowboy College.
I had the chance to do a mounted patrol in Arizona, in the mountains above Fort Huachuca.
This patrol didn’t end well for me as the horse put me into a patch of cactus, but that’s beside the point. Horses are still a part of the military and will always be so as long as there are Horses.
My favorite part of Boot Camp was the Bayonet Training… after of course the Rifle Training. I loved the aggressiveness. I loved the Pugil Stick work. We all gathered around a circle, two fighters got in the ring and used pugil sticks to beat the piss out of each other. I was pretty good at it. I defeated a couple guys pretty easily, not because I was so awesome, but they just kinda sucked. Well the DS got this big grin on his face, took off his hat and shirt, and was handed a pugil stick. He told me to give him my best shot. A couple seconds later I had landed one on him. He stopped, took a step back and gave me this sickening smile that I will never forget and continues to haunt my nightmares. .. he then blasted me in an uppercut with the pugil stick so hard that it lifted me off my feet and landed me half out of the ring. I was knocked out for a few seconds.
The DS actually gave me a hand up, dusted me off, asked if I was okay. I said I was fine and that I wanted another round. DS patted me on my back, gave me a complement, and declined kicking my ass again. That night after chow the DS said to me that he was surprised I had actually landed a blow on him as no Recruit had ever done that before. It was barely a tap. He said that had it been a real bayonet, I’d have opened up his jugular and he he would have been dead. I said, yeah, but you would have died after my decapitated head stopped rolling around on the ground. He actually laughed.
In the field I only actually used my bayonet once. And that was to spear my rifle into the ground so I could relieve myself.
The US Marines though, those cats take the bayonet a lot more seriously. Their training is far more intensive.
I would not want the US Military to ever drop the bayonet as a weapon. It’s old school, sure, but can be very effective in the hands of a man that is trained and motivated.

Wife and I stopped at SMITH’s the other night. I noticed a guy wearing a “Tactical Bag”. Didn’t think much of it. I watched this guy walk around, purse over his shoulder. He’d talk on his phone, put it back in. Take out a widget, do something with it, then put it back in his purse, while pushing a shopping cart just like all the other women in the store.
This biker dude walks up to the ManPurse Packer and I just happened to be within earshot, as I was selecting bacon and the Purse Man was checking out the Sausages.
“Nice Purse.” The Biker said.
“It’s not a purse!” The Purse Guy said, indignantly. “It’s a Maximum Expedition Tactical Load bearing Assault Recon Bag!”
“Yeah? Well whatever the hell you call it, it’s still a fucking brown purse, bitch.” Then he walked away.
I was trying not to laugh as the Purse Guy just stood there stammering like his whole world was crushed. I picked up the bacon I wanted and walked past him heading out of the damage zone. He looked at me and saw that I was still trying not to laugh.
“It’s not a purse.” He said, defiantly.
I kept walking but said over my shoulder, “None of my business, pal. Whatever makes you feel butch.”
I saw the guy yesterday. He didn’t have the big with him.

Last couple days I have been packing my Glock 22.  This is the $200 dollar Rescue Glock that I saved and rebuilt.  I have to say that it’s becoming one of my favorite handguns.  The chop-job I gave it, cutting it down to G23 size was a big help.  The stippling job also helped.  It fits remarkably well in my hand.
But I think what makes it carry so well though… is the holster.
Jason from Consealment Solutions put a rig together for me that I just love.
I was going to write up a review here… but it wouldn’t to it justice.  I’m going to have to show you.  Video Review is coming.