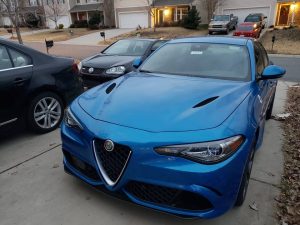 Driving the Alfa Romeo Giulia Quadrifoglio is an experience that any true Car Guy needs to check off the bucket list. Sitting in the car, you find that you are both very comfortable, and held into place thanks to what are the most perfect sport sedan seats I’ve ever felt.
Once adjusted and mirrors positioned, you buckle up and hit the start button located on the steering wheel. The button’s position is to remind you of just what it is you are getting yourself into. Things pop into mind like “Ferrari” and “Racing Car”, and those things are not far from the truth. The engine truly is derived from Enzo’s passion. That’s no joke. But this is a Sedan that is meant to be used as a car, just like any other… That’s why there are the A and N settings on the now famous Alfa Romeo DNA dial.  END_OF_DOCUMENT_TOKEN_TO_BE_REPLACED