I keep going back and forth between the KTM 990 Supermoto and the 990 Adventure R models.  It’s not like I have any hard on for KTM, as I had one and blew the engine the first month I had it.  Since I’ve sold the ZX-11, I am without a Long Range bike and this makes me feel like I’ve had my wings clipped.  Reason I sold it is due to my knees, but the position on these 990’s is one that I can still do… I sat on a 990 Adventure R, and it’s doable for me.  Some of the other ADV bikes, not so much.  I’m not sure about the position on the Supermoto though, I’ll have to find one first.  The peg position is the same, but the seat height plays a factor here too.

I’m also thinking about turning my 525 MXC into a Supermoto.  Primarily for better On Road riding as this KTM is now my Daily Rider.  I don’t need Knobbies for the Highway.

Check this out guys.  Wed Nights, Hump Nights, I’ll be doing a live Spreecast at 8PM MST, or shortly there after.

We tried it out twice today.  In the afternoon and at 8pm.  Both times the results were very positive.  The second time we had 10-12 people, very interactive, and a lot of fun.

I have some plans for this for tomorrow night’s Regularly Scheduled Show. 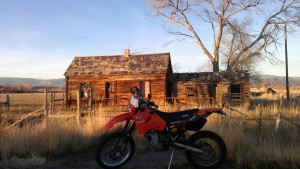 I got there a couple minutes too late.  I wanted that sunset light on the cabin, but it went just a touch too low and the bike is in shadow instead of lit like I wanted.  But that old cabin still looks cool.
This is just off Hwy 121 in Lapoint.  If you are on Highway 40 and turn north to connect to 121, hang a Left at Shirley’s and this place will be about a half mile down the highway on the Right.  It’s older than it looks.

Hi, its me again.
Look, I know we don’t see eye to eye on a lot of things… But I’m trying to like your Gunsight Scout rifle.  Can you do me a little favor?
Can you make it take FAL or M-14 mags?  Either one.  Thanks.  Yeah, because your proprietary 10 round mag kinda sucks. A lot.
And while you are at that… Make a semi auto .22 Mag pistol with a crazy high capacity.  Based on your SR9 should be great. 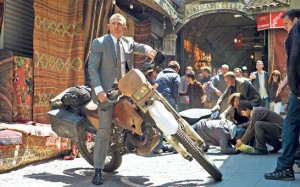 Black Friday is tomorrow. A lot of guys want guns. A lot of guys are afraid of their wives, even though they have plenty of money to get the gun they want. I offer you slackjaws some friendly advice on how to get your gun.

I had a strange thought.  That I should sell MadOgre.com and start a new Blog afresh.

Update:
Okay, so…. no… I’m not going to sell MadOgre.com.

Due to popular demand, Ronin, Raiders of the Lost Ark, Zulu, and The Thing has been included, bumping a few movies.

Some guys have been asking why no Star Wars. Because primarily there is very little Baddassery going on. Han shot after Greedo misses, Storm Troopers miss too much, and Luke is a little biotch.

Update: Wild Bunch instead of Inception.

I think this is about as solid as it gets for the Top Fifty. Really, this list is now a Master’s Degree in being Badass. Each movie teaches lessons in about being a fucking Man, and not a sensitive metrosexual guy with a spare vaginia in his man-purse.

What do you think now?