My Honda Magna has a windscreen that looks like a police riot shield.  I took it off and blasted up the highway… and it’s not good without some wind protection.  I need something a lot smaller, something streamlined a bit…   Maybe something like this: 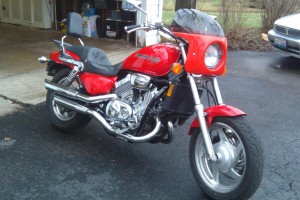 I like the nice sleak bullet shape it gives the front end, while still having enough to channel air flow away from most of me.

If anyone out there sees a fairing like this that would work for a ’95 Magna, Let me know, please!

Now you guys all know that I take Lubrication very seriously and Gundoc and I have studied more on Lubricants than anyone short of a PHD should.   We’ve talked to Chemists and Nano Scientists and have studied oils down the Molecular level, and how they act and react with different materials and uses in different applications.  That’s what we do… that’s why Slipstream is so bloody good.

Well, this sales rep guy comes in and shows us some stuff from a company called Wasp Sports.  It’s called Bore Stinger.  It’s a CLP type oil made from Tree Sap and Root Oils, according to the rep.  He was kind enough to leave us a couple bottles.  Everything I know of tree sap pretty much has nothing to do with Lubrication of small moving metal parts.   According the the Sales Guy they take the tree sap and stuff and shock it for 3 days at 30,000 volts or something to “Change the Molecular Structure.”  Yeah, that’s what happens to Organic Compounds when they encounter heat… Some people call it cooking. Which is why Crusader doesn’t use organics.

Do you know what happens to tree sap when it gets old?  It gets hard and we call it Amber… the only thing Amber is good for is preserving Dino DNA and looking yellow.  These are not things you want in your gun, do you?

The Rep made all kinds of claims… A lot of talk about Conditioning, which I still consider something for you Hair, not your Firearm.  10 Micron Penetration into metal.  So evidently your metal is like dried pinewood and this stuff soaks in.  Yeah, metal doesn’t quite do that, but okay… I’ll listen some more.  Then I heard the biggest claim.  This stuff will give you a 700FPS increase in Velocity in a 7mm Rem Mag if you treat your bore with it.  Really?  700, huh?   Not buying that for a second.  Well, after the sales rep left, I had to hit their web site.  WaspSports.

Their (talking about Native Americans here) secret “recipe” for seasoning weapons was coveted by friends and enemies alike, and the Eastern Natives became known as “Master Metal Seasoners”.

You know, my brother and I have both studied Western History in College… Including Native American Studies.   My bro even has his Degree in it.  We’ve never heard of that before.  Ever.

Well, me being who I am, I had to try it out.  3 guns.  I took down 3 different firearms and tried this stuff out.   You know, it’s decent stuff for wiping down a gun.  Probably because of the Wax Compounds that are most likely what’s in the stuff.   But at an oil… I literally felt no difference in these guns – which were bone dry to start with.  One gun, a Walther PPK/S, even kinda felt “Not as good” as before and had more of that Zipper sound after using Bore Stinger.

For about the same price as Slipstream… you can either get Bore Stinger… or you can get the best Lubricant known to Science that is absolutely proven in hostile field conditions and in very kenetic environments.

Our friend, Stephen Camp, noted firearms expert has passed away.  I learned a lot from him.  He was one of the great ones.  He will be missed.

Remember… All our Soldiers died in great pain so you can have your 20% off shit you don’t really need.  Enjoy it.

I’ve been thinking a lot on the Servicemen that I knew who have died… and Servicemen from Utah who have been recently killed.  And I’ve been thinking about my Grandfather, who served and survived WWII… one can imagine the stories that he had that he never told anyone… and I remember some that he did tell me.  Much somber thoughts today.

I hear people say “Happy Memorial Day!”   WTF is that?  I am not going to say that to anyone… I just say “Remember what the Day is about.” This is the day we honor and remember the best of us that sacrificed themselves on the alter of freedom.   This reminds me of the movie Saving Private Ryan, when Tom Hank’s character is mortally wounded, and his words to Private Ryan, “Earn this.” Our freedom is a gift that often times we don’t deserve… so strive to be worthy of it.

All year long, the weather forecast has been wrong.  They have continued to put up these 5 Day forecasts showing Warmth and Sunshine… but every day it’s been cold, overcast, and raining.  We’re almost into Summer and it feels like a Seattle Winter.  The Forecasters are either lying to us or they are incompetent.

So I think the solution is that they should be treated like salesmen… A Salesman only gets paid when he closes the sale.  These Forecasters should only be paid when they get it right.

We just read on WTA that there has been another KB with a Semi-Auto .17HMR rifle.  Most of the time the result of a KB is only stings and scares… but this time the shooter was hurt badly.

A blow back semi auto .17HMR (and even the .17 Mach 2 but to a lesser extent) is a bad idea.  No matter who makes the gun or how custom the gun is…. it’s going to, at some point, have a KB.  This is the same problem with EVERY semi auto .17.   Which is why all of them have been recalled and dropped from production by everyone that has ever made them.  Except for Alexander Arms, who is making a 1200 dollar AR type – that will still do the same thing everyone else’s did.   Even in one of the Gun Rags, during the review process the writer mentioned this happening but kept shooting it.
There are a couple causes of the .17 Rimfire KB’s.
1.  The bolt, rebounding off of firing the last round, slams forward into the cartridge rim hard enough to set it off while the round is in the magazine.
2.  A few rounds fires slightly out of battery puts enough carbon fouling in the chamber to builds up until a case is completely unsupported and firing pressure blows it.
END_OF_DOCUMENT_TOKEN_TO_BE_REPLACED

The Zombie Survival panel that I mentioned before… Here is the Podcast of it. It’s fun to listen to.  Mike, Larry, Zack, Tom and others…  Good job guys.

Crusader Weaponry has been using Duracoat for some time now.  And Duracoat has proven to be a great finish for Firearms.  It’s super tough, being an epoxy type product and it comes in a myriad of colors to satisfy any request.   I’ve used Duracoat on many weapons, and it’s been fantastic.

However, we’ve been working with a very particular customer… and he wasn’t satisfied with Duracoat.  His requirements were much higher than what Duracoat could provide.   We’ll reveal who this customer is in about a month… and you guys wont believe it.

Gundoc did some research and has found a new finish that we will be bringing out as an added cost option for all Crusader guns.  It’s called Cerakote and it makes Duracoat look like mere Krylon.  It outperforms Duracoat in every metric.   It’s 3x the cost, but it’s 10x the finish.  Stronger, Harder, Slicker, and even better looking.   Not as many color options, but who cares… really.   Cerakote takes everything to the next level and just flat out makes your weapon better.

I wouldn’t recommend this new finish on all guns… Duracoat is just fine for most applications.   But there are those guns who’s missions require the absolute best protection… and Crusader has you covered.

My brother Zack, and my friends Mike, Larry, and Tom were at ConDuit and were all on a panel together about surviving in a world gone Zed.
First point of order… When it comes to winning against Zombies, ignore everything Max Brooks has ever written. If you have to get a book or two to follow, the first book to get is the Boy Scout Handbook. Not a new one, but an old one. Then, if you can, the US Army Ranger Manual. Just to make you feel safer.

END_OF_DOCUMENT_TOKEN_TO_BE_REPLACED

“It’s just like riding a bike. It’ll come back to you.” That’s true. Getting used to riding again… brothers and sisters… it feels good. There is no other feeling like it. If I have to explain it to you, you wont understand. I should have never given up riding.
The Honda V-4 engine – I’m of the firm opinion that this is the best engine ever built for motorcycles. The strong roll on acceleration is biblical, smooth, and right now. This makes passing rock flinging trucks not just faster, but safer. Being able to get out of danger quick is a very good thing. Also the fact that my little puny 750cc engine has destroyed a number of 1200cc powered V-Twin type bikes… that just makes me happy.

Getting used to riding again is one thing. I’m also getting used to a new bike. The Magna I have now is called a “3rd Gen” by Magna Owners. The previous Magna I had was a 1st Gen… It was an 85 or 86 if I remember right. I got it for 800 bucks and it only had 2,000 miles on it. It was Cherry. Those Magnas had a longer fork, and pegs that were a bit more forward… more chopper like. After riding this Magna, in it’s more “Standard” position… I think I’d rather have the older style for the comfort.
However, the 3rd Gen Magna has more rigid forks, quicker turn in, and all around better handling. I think even has a better lean angle to it. It feels more like a Sports Bike. This makes me tempted to take curves at faster velocities, riding it like it was a Sports Bike. Which is all fine and well… very cool actually… but I’d rather like the more stretched out position of the older bike. Easier on the knees.

Then again, back then with my last Magna, I didn’t have any problems with my knees. Still. I miss that old Magna. It was a dark blue – almost black… all dark and sinister looking… it was a sexy bike. I rode that when I was going to ROTC at BYU. Not the normal BYU bike. Everyone else on a motorcycle had sport bikes or scooters.
No matter how bad I feel, how much I hurt… I get on the bike and start riding… I feel better. I forget the pain and everything… and I’m just riding.