END_OF_DOCUMENT_TOKEN_TO_BE_REPLACED

At SHOT Show took a look at the brand new and shiny Kimber Solo 9mm.  At for some reason that I can’t put my finger on… I disliked it.  No, let me be clear.  I hated it.  I wouldn’t have one.  Even if it was gifted to me, I’d sell to some unfortunate nitwit who would think it was nifty and then I’d go buy something I liked more and could get more use out of… like blister cream or 8 Track tapes. 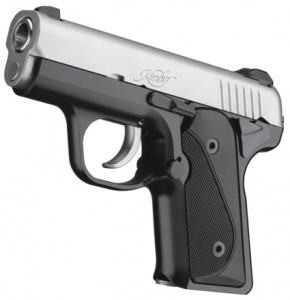 And now here it is, six months later.  To be honest, it’s grown on me.  I no longer hate it.  For some reason I can’t put my finger on… I kinda like it, and I wouldn’t mind having it.  But I’d still never actually buy it.

It’s… hmm… I’m searching for the right word for it… “Nice”.  It’s a nice little gun.   And perhaps that’s its problem from the start.  You see, a universally accepted good gun like a 1911 Commander .45 is great looking gun… beautiful, in the eyes of fellows like me.   At the same time it feels just gorgeous in the hand.  It fits.   It also looks like what a Weapon should look like… it looks like it’s going to destroy something, it just hasn’t decided who yet.  It has a form that’s based on it’s function and that function is to put large bullets through bad guys.

And this is where the Kimber Solo Nine Millimeter fails.  Even in the name, just say the name a few times out loud… it even just sounds “Nice”.  Like something Julie Andrews might have in her purse… it’s just well mannered and nice.  Or like something you might spread on a piece of toast.  It’s nice… Pleasant, without being fun or too interesting.   Like having a Brunch with your Grandmother… nice…  And that’s what put me off of the Solo.  It is completely lacking in Sex and Violence.

Now, if Kimber was to scale the Solo up… to say .45… then all the sudden it would become very interesting.  Or even something slightly different, like .357 SIG.  But just a 9mm?  Sure, it works… perfectly serviceable.  Certainly better than a .380… it’s nice.   But I won’t buy Nice.  Not for the price.  The thing is retailing for about $630 and for that much salad you have a world of other options that are less “nice” with more Sex and Violence.

Can you imagine the Solo in .357 SIG?  Kind of like a young Julie Andrews playing a lead role in a remake of Bound.  Proper, but she’s a dirty dirty girl behind closed doors.

Alternatives would be perhaps a Kahr MK9, or if you can find one, a Colt Pocket 9 – which I am still wanting one day.  A Springfield EMP9 would also be pretty cool.  But the Solo 9?  It just leaves me feeling less than satisfied.

I think I just might be the first gun writer that has compared a handgun to the star of Sound of Music… Well, at least not to Captain Von Trapp.

As you guys know I’ve finished the first book of Uprising and as we speak, the publisher is going through it with a fine tooth comb getting it ready to print. When that happens, I don’t know just yet. Uprising’s sequel, Uprising UK is almost finished… But as it sits, I am needing to take a break from zombies.
I was going to work on Privateer or Silvershot, but a story idea smashed me upside the head and I’ve got to get it out. It’s a Sci-Fi. Something I’ve just never been able to write before. Moreover, it’s a Horror. I’ve recycled the title Vibrant Darkness for this work and I’m well underway.
In this universe, spaceships are sub-light, but can cross the vast distances by traveling through “warp space”. Similar to Warhammer 40K, but I’ve strived for Warhammer’s inspiration, HP Lovecraft. My goal is to make this a Lovecraftian Sci-Fi. But I’ll have to let the readers be the judge of that.
For those who are not WTA members, you will have to wait.  This book is going to be published before summer’s end, as is my goal for it.  For those that are members of WeTheArmed.com, it’s in the Creative Writing Forum, a Sub-section of the R&R Forum. For Members, here is the direct link.

The Curmudgeon asks a good question…
Roll your mouse over the picture.

I think I want another AR, build by Crusader Weaponry of course… but I think I’m going to do something a little different.

Being a Gun Counter guy at the best stocked gun counter in the western states, I see a lot of AR-15 builds in a lot of different configurations and normally I’ve just glossed over them, and everything in all the catalogs.  But there is one that I keep coming back to… it’s not one we’ve stocked… but the idea of it is sticking in my head like a naughty idea.  I keep looking at the Bushmaster MOE Dissipator.  What I like about it is the longer sight radius for when using irons… and the longer gas tube, which does come good things for the gun’s longevity.  Mostly a slightly lower cyclic rate which reduces wear and tear slightly.   What a great looking gun… and it fits the way I shoot.  I like that.  A lot.  I think I need a Crusader build along those lines.

Also along these lines, I’m about ready to just sell my Surefire Quad Rails and the Surefire Weapons Light, Mount, tape switch and everything.   Hell, I’m about ready to just trade someone straight across for an MOE handguard with 2 rail section and a MX3 light.  Weight.  I’m tired of the weight.   As much as I love my M4’s accuracy, I’m sick of lugging that thing.  It is a heavy beast.  Of course I have the heavy barrel as well, which isn’t helping, but at least I could trim some mass off my primary weapon… couldn’t hurt.  (BTW, this wasn’t a Crusader Build)

I talked to this guy the other day, and it’s been bothering me. I take Slipstream pretty seriously… and this guy said, “Oh yeah, I tried Slipstream. It’s pretty good. It’s made by a little father and son company in South Jordan.”
“No. It’s not. It’s made by Crusader Weaponry in Murray.”

“Well, I tried it and it’s not as slick NAME WITHHELD.”

END_OF_DOCUMENT_TOKEN_TO_BE_REPLACED

Drudge has the headline “Dems to Taxpayers: You need to pay more.”
Well, Ogre to Dems: “You need to STOP SPENDING OUR MONEY!”

This is the SECOND TIME it’s happened.  I grab my brain bucket, pull on the gloves and jump on my Magna.  I cruise around the corner, up the street, and hit the highway.  When I hit 60MPH, the airflow through my helmet’s vents, dislodges anything that crawled into them.

What happens is I get up to speed, and all the sudden there is a Speeider crawling on my face shield.  Normal reaction is to swat it.  Well, tonight I swatted it.  It of course, being INSIDE my face shield… was unhurt.  So it jumped onto my face.  On my cheek.  Then it ran under my eyeglasses.  (Insert the “Scream Like A Girl” sound effect)

END_OF_DOCUMENT_TOKEN_TO_BE_REPLACED

If you have a Kindle, or if you have a PC or Mac or Smart Phone and downloaded the Kindle e-reader, I got something for you.

My brother is a Prolific Writer.  Get his books.  They are cheap and Good Reads…

I have to admit that I really like his ghost story: Behind the Shroud.  In fact, he has characters that make a cameo appearance in “Privateer”, one of the books I have in the works.  Gorgon is also a very awesome work of Fantasy that takes a different look at fantasy “monsters”.   His books are good, people.  Worth the downloads.  And quite frankly, he could use the support since he’s basically an out of work Substitute Teacher here during Summer Vacation.  (also, he’s working on Gorgon II, so you’re going to want to catch up.)