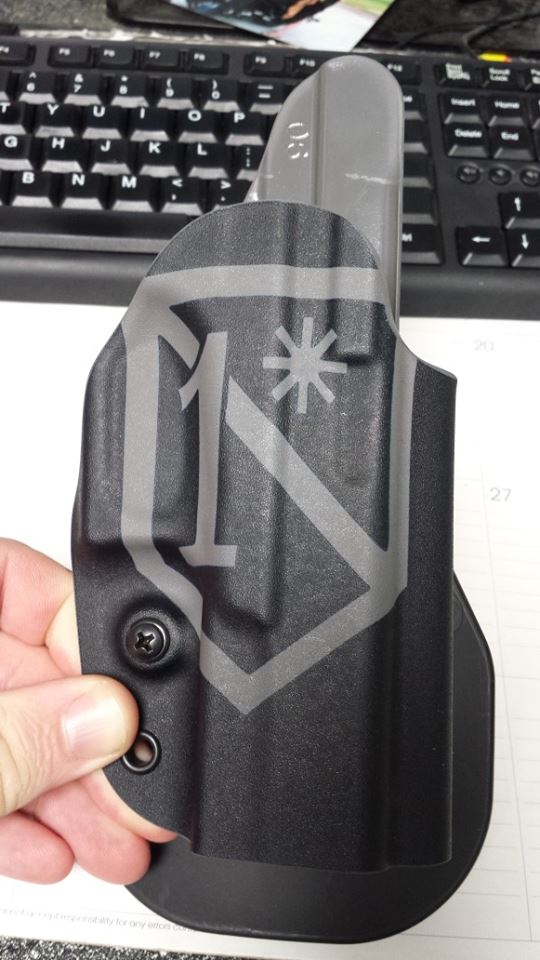 I really like this.  This is a G-Code OSH holster, which is enough right there to be like “I’m down with that.”  But what makes this one interesting is that it’s Gray Kydex that’s been stained/dyed black on the surface to leave a Pattern.  Pretty much any logo or design you want within 1 color limits.
The stain is soaked into the kydex so it’s very tough any only deep scratches will dig down to the gray substrate.  Which means you can rock this rig for years and that design will still be there.

We are looking at how possible it would be do offer this as a production option, with the logistics and costs. I think this is cool as hell, but logistically a nightmare to set up.  There are also technical issues to overcome within the web store for allowing a limited number of any one item to be sold.  I’ve got it all figured out, but need to come up with a way to test it to make sure it works right without screwing everything up.

There has been some controversy in the Gun Community about Appendix Carry and a video that was posted by Gun Nuts.

In what tactical situation do you ever need to put your gun away lightning fast?  We see this usually just after whipping one’s head back and forth “scanning for threats”.  This is where you need to take some time.  Let’s think about this.   You just had a kinetic situation.  Your body is still in fight mode.  Your blood is pumping like a Fire Engine and you are still amped up on Adrenaline.  This is where you need to take a deep breath, let it out slowly… and then reholster… slowly.  You need to take a second or two here.  You may have caught a round and didn’t realize it.

A couple years ago now, we had an IDPA Shooter that failed to think.  He was amped up on the stage, which is a hell of a lot less than the boost you’ll get from an actual shooting incident.  He was using an XD, a very safe pistol.  Until he reholstered with his finger on the trigger.  No waiting to show clear or any procedurals were followed.  He shot a string and then went to shove his gun in the holster.  Finger was still on the trigger.  The .40 cal projectile went down his leg and out with about as little damage as possible.  He was lucky.  What if he had been packing Appendix Carry?  Ouch.  Don’t even want to think about that.  Other incidents like this have happened around the country.  This wasn’t unique.

Never be in a hurry to reholster.

After shooting a target, come into a high compressed position with your finger off the trigger.
Scan the area for threats, and don’t take less than five seconds.
When the area is clear, take a deep breath and let it out slowly.
Then slowly and carefully reholster your weapon safely.

Never be in a hurry to reholster.

Last couple days I have been packing my Glock 22.  This is the $200 dollar Rescue Glock that I saved and rebuilt.  I have to say that it’s becoming one of my favorite handguns.  The chop-job I gave it, cutting it down to G23 size was a big help.  The stippling job also helped.  It fits remarkably well in my hand.
But I think what makes it carry so well though… is the holster.
Jason from Consealment Solutions put a rig together for me that I just love.
I was going to write up a review here… but it wouldn’t to it justice.  I’m going to have to show you.  Video Review is coming.