I remember the first time I ate a Jalapeno. It made me cry. I was young… still watching Saturday morning cartoons. Just a kid. I think we had just moved to Fircrest, Washington.  I remember going into the kitchen and seeing these peppers on the counter.  Don’t remember why, but I picked up the pepper off the counter and started eating it. Never had one before, seen one even. I was unprepared and unfamiliar with the heat of that little thing.  Thought I was going to die.
Now, if I’m in the mood, I can eat them whole like I would a carrot or something. I’ve learned to enjoy the heat. Tolerance is the word. I built up tolerance to the heat and found I liked the flavor. Took some time of course, but now I do not consider them to be all that hot.
Much is the same with recoil.   Especially with Shotguns.  I don’t mind the recoil and I enjoy the devastating results a shotgun can give you.  People perceive spicy food’s heat, and recoil differently.  This is based on familiarity and tolerance of the thing.  The more you are exposed to it, the less it effects you.  It’s not that one guy is packing more sack than the other guy… it’s just a matter of getting used to it.

Speaking of hot peppers in Fircrest.  I remember pranking my brothers, Josh and Zack.  I coated a couple apples in Tabasco Sauce.  Multiple Coatings, let dry, coat some more, and let dry again.  The apples looked normal.  Then I made sure there was nothing in the fridge to drink.  Then I filled the faucet with Tabasco.
Like a good big brother, I offered my brothers the apples.  In a very short amount of time, the boys were in great distress and running around… they ran to the fridge… nothing… they ran to the sink.  One of them put his head under and opened the tap.  Hilarity ensued.
To this day I feel bad about it… but still laugh at the memory of it.

Speaking of Recoil.   I got the latest issue of Recoil Magazine on my Nexus 7 Tablet.  I had little interest in it, as I had cancelled the subscription.  But since I knew Ian took over as Editor & Chief I thought I might give it a look through.  I’m impressed.  The magazine is good.  I’m not through reading the issue, but I am liking everything I’m seeing.  It’s less GQ with guns and more Gun Magazine, with Style.  It makes most news stand gun rags look tired and old.  If they keep it up, I’ll renew my subscription.

You guys have heard the Grilling While Armed segments on Armed American Radio.
Mark and I will be doing a book on this.
Recipies, Guns, and photos…
It’s going to be fun. 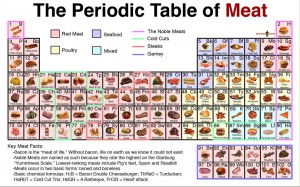 The Pelican Lake Cafe is located overlooking the Pelican Lake, it’s a bit out of the way but well worth the detour.  If you are traveling along Highway 40, between Roosevelt and Vernal, Utah, take a turn to the south onto highway 88 heading to Ouray and Pelican Lake.  Stay on that road for about 10 mile and you can’t miss it.

The food is Good and Plenty at a very reasonable price.  The breakfast burritos are shockingly good and the Burgers are absolutely the best in the state save for the Buffalo Burger at the Bohemian Brewery in Murray. What gives Pelican the edge though… the bun.  Its fantastic.

I sold a cool tactical shotgun to the owner and we talked about his cafe and the food there… He’s proud of his place and justly so.  Very cool guy.  Stop in, eat a burger (or his favorite, the Chicken Taco) and tell him that the Ogre sent you.

I bring this up again, because I took two of my boys there to grab a bite.  It was well worth the drive.

I’m getting ready to ride. I found some .45ACP and I can fit it in my saddle bags… I can’t bring much gun stuff on a bike, but the shooting is the least important thing for me. Funny that I should say that, no? I’ll bring what I can.
Saturday, at the Provo Range, the one up Squaw Peak in Provo Canyon, we’re having our Gathering. If you can, show up. We’ll be there in the morning, then take a break from noon till 4, then we’ll be back shooting unless something else really cool pops up and we change plans. You never know… so you best come out in the morning!
I’m looking forward to this a great deal. I can’t say how much.

These guys are having too much fun.  Massive gun safety violations, and I don’t condone this sort of thing… but it was funny.
Especially using a Desert Eagle like a spoon.  Something I’ve never considered before.

The ride out to SLC was fast and the Honda Magna did very well.  Save for one small detail.  I had thought that the seat was just fine.   Unfortunately on an extended ride, the seat becomes a torture worse than water-boarding.   The 100 mile range per tank is more than enough.  Because at about 60 miles, you have to get off that seat and get some blood back into the buttocks.

At Crusader HQ, I dropped off my ATI Commander for some slicking up and for a new finish… Cerakote.  In Battleship Grey.    We got the Grey Cerakote in for our customer, who I still can’t reveal.  But the color is awesome.  After talking with Joe and twisting his arm, he agreed to come with, on a little adventure.    I had  a mission.

END_OF_DOCUMENT_TOKEN_TO_BE_REPLACED

Since I’ve drank a soda of any sort, full octane, diet or otherwise. Instead I’ve been drinking water and green tea. Same thing, really. I’m avoiding Sugars, HFCS, and the chemicals used in diet sodas.  So how do I feel? END_OF_DOCUMENT_TOKEN_TO_BE_REPLACED

They nail me every year.  Cute little girl asked me to buy some Girl Scout Cookies… she is adorable… huge grin that wrinkles her nose.  I said “I only have a 20 dollar bill.”

“That will get you six boxes!”  She grinned… little con-artist.  I took six.