I want to like the HCAR.  I took a look at one earlier today and first reaction is hey, this is cool.  But then I got thinking about it, and things started to bug me.
Don’t get me wrong… I’m a fan of the Browning BAR.  It’s awesome American History, and I’d LOVE to own one of Semi-Autos.  But to modernize the BAR and make it something different just doesn’t do anything for me… and really it kinda irritates me.
It’s an expensive gun.  And if you wanted something firing a .30 cal projectile, and save a little money, and get what is going to ultimately be a better rifle for the application of tactics… a SCAR 17.
“Oh but, Ogre, these are .30-06’s!”
Uh huh… So?  Can you still buy cases of cheap .30-06 ammo?  Not really.  Which means you are going to be buying them in little boxes of 20 like regular hunting cartridges, and most likely paying a premium for them now.
The difference between .30-06 and .308, outside of case dimensions… is about only about 100 FPS.   Let’s grab two comparable loads from Hornady.
Here’s the .308.  And here’s the .30-06 loaded with the same bullet.
The difference is negligible.  Feel free to go through Hornady’s online catalog and compare rounds with the same bullets and see for yourself.
Anything you shoot with them, aint feeling the difference.  The .30-06 is not giving you any practical advantage that you could utilize in a tactical situation.  In fact, it’s going to be a disadvantage because with the .30-06 you are dealing with a longer case, requiring a longer box magazine, which means more bulk in your kit, which means maybe you can’t carry as many mags.  Small difference in length could mean big difference in load out.  Maybe.  Say… Does anyone make a chest rig that can carry .30-06 magazines?  Molly Pouches?  Huh.
If I want the nostalgia of packing a BAR – oh and I do – I’d pack the classic version.

Now what these cats should do if they want to take the BAR and make it “Tactical”.  Make it “Retro Tactical”.  Ahem… allow me to fire up my awesome Photoshop Skills… and… Presto!

Here you go… A BAR Carbine.  Recognizable as a BAR, but in a handier format for tactical applications… Lighter, Usable, and Classic Cool.  And if they wanted to really make it handier – make it in .308.
THAT is what the HCAR should be.  Not that Tan Pistol-Gripped, AR stocked monstrosity.   EDIT:  Thanks to Leon for reminding me!  I just re-invented the Colt Monitor.
That’s what they should be making… Colt Monitor Replicas.

Fast gun segment on Armed American Radio.   I picked 4 of the more interesting Concealed Carry Gun Options.
Ruger LC9S, a Striker fired version of the LC9 we are all familiar with.  Much better trigger pull – to the point it means this slim ccw gun becomes a very serious option.   Even for me.
Ruger has another really good CCW option, the LCRx.  This is like the now familiar LCR revolver, but this one has a standard style exposed hammer, which means you can thumb-cock the action for a more accurate shot. I like that.  At only 13.5 ounces, you might think they are snappy – but with that nice rubber grip, it’s a pussycat to shoot.
Springfield XDS 4.0   This is the same gun as the XDS we all know and love, but with a longer 4 inch barrel.  A little better velocity because of that longer barrel, but the big advantage is the longer sight radius which makes it easier to shoot more accurately with.
Browning 1911 .380.  This gun was just recently announced.  It’s the 1911 .22 that’s been out for awhile, but rechambered for .380 auto.  What they did was they took a 1911 and scaled it down to only 85% size.  So it looks and functions just like the classic JMB design, but small.  Taking a gun that’s just too cool, and making it a viable defensive options.  Especially if you have tiny hands. Or you just want something different.  Probably wont be available until March of 2015, but that’s just a guess.  I’ll be looking for this at SHOT SHOW right off the bat.

Please build some X-bolt Varmint Stalkers with fluted barrels in 6.5 Creedmore.
Thanks.
Not only do I want one, but I could sell everyone you built.

The Browning X-Bolt Varmint Stalker in .308 Winchester.  How does it shoot?  Like this…

This would become CRUSADER’s new HQ:

Here is an old Highwall Browning in .22-250.  Amazing in every detail.  They don’t make rifles like this anymore.  Just look at the wood on this thing!  Stunning.  The photos do not do it justice. 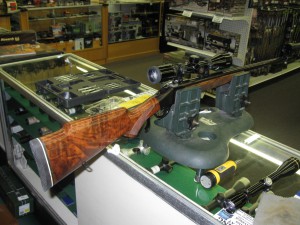 END_OF_DOCUMENT_TOKEN_TO_BE_REPLACED

Looking at the Browning Catalog, I have some thoughts.

Nikon gave me a sweet new Monarch 3-12x42SF M BDC scope…  I love free stuff.  This new scope is going to go with the new Browning X-Bolt .300WSM that Browning is giving me.

Then I can trade or sell that for a new laptop!  SWEET!!!

The rifle is still coming… it will be here in June.

The Deadliest Gun:  By Tim Elliot

The legendary M1917 Browning machine gun was responsible for plenty of soldier’s deaths from World War I through the beginning of the Vietnam. The M1917 was a heavy belt-fed water-cooled machine gun that was commonly mounted on Jeeps. Extremely impressive for its time, the M1917, which was used primarily in WWI, had a firing rate of 450 rounds per minute while its later incarnation the M1917A1, which was used during WWII, Korea, and Vietnam, had a firing rate of up to 600 rounds per minute.