Fixing America is probably an impossible thing to do, even if it’s actually very simple.  Six simple steps would fix probably 90% of what’s ailing America.

1.  ID Required to Vote.  Voting is a Constitutional Right, yes, I know.  But so is owning a Gun but you need ID to buy one of those, don’t you?

3.  Congress should have not just Term Limits, but also No Retirement Benefits.  Salary should be set at the mean average for the district they represent to remind them of who they are representing.  This will also kill the Empire Building and Elitism of America’s Royal Class.  Without these issues in America, Government Regulation will not be based on who pays off who like it is now.  Every industry, Banking and Finance, Auto, Energy, is all about paying off or “Contributing” to certain politicians.  This isn’t right, and it’s certainly a whole mess of corruption that needs to be cleaned out.

4.  Balanced Budget is a Requirement unless it’s a specific time of war.  This means Congress stays in session until it’s done and they keep it in balance.

5.  Each State owns and manages every square inch of their States.  The Federal Government owns no land save for Washington DC.   This also goes so far as Mineral and Water Rights to those States and of course, Energy Development in those States.

I hope everyone embraces their families and shares the love that the holiday is all about.

I’m pretty much a fan of Magpul and everything they have been trying to do.  They have made some very good stuff.
Now they have turned their attention to the classic and undying Remington 870 Shotgun.   I’m not sure if I’m on board with it. 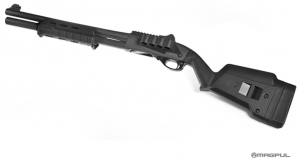 At first, I thought it looked cool… But then as I looked at it, I started thinking that the Cadillac CTS-V styling just doesn’t work on the 870. I look at the 870 and feel that it’s more organic and the Magpul stuff is just too synthetic.  The stock looks like its too large and possibly heavy.  Awkward.  I don’t like the grip angle either.  It seems… I don’t know… off.   The MOE treatment is cool up front, but I would have hoped for a more CTR set up at the buttstock instead of what they got going on.

You guys have seen the news report about the first Navy Gay Kiss.  Pretty much, that aint the first gay kiss.  This is going around some circles as being troubling.  My take?  Don’t care.  It’s nice that these girls are able to be themselves… I have no problem with this.  I don’t think the Government has the right to tell someone who they can and can not love.  What I see as a problem, is the news making an issue of it.
If we want to be Free… we have to accept Freedom.  Funny, how most people who seem to have issues with this – have issues with real Freedom.

BTW, they look like a great couple and we wish them all the happiness in the world.

“Where does he get all these great toys?”

Man oh man… I’m sick of Christmas Music!  All day long!  We have about 5 CD’s of the stuff, and we rotate through them.  Could you imagine having to listen to nothing but Christmas Music and nothing else for the rest of your life?

But what could you listen to for the rest of your life?  5 Bands. Nothing else.  That’s it.

I didn’t realize how much I missed my last AK-47 until I brought my new one home.
The simplicity is beautiful. Staggering.

It turns out the Amish Girl was killed by a horrible incident of negligence.  Pretty much it was an accident, but one based on a negligent action.   This is a horrible thing, but the man never intended to kill the girl.  I’m sure that gives comfort to the family of the young woman slain – Okay, not even close.  My heart goes out to the family.

Firing a gun into the air is incredibly stupid.  As we can see the potential for tragedy played out to the fullest in this case.  Doesn’t get much worse than this.   This is why we don’t fire a rifle – of any type – into the air.  Ever.  Even a muzzle loader, 1.5 miles away from anything.  Just don’t do it.   For a muzzle loader, you can’t just unload, which is why the man fired it.  So what you do is you fire it into something that can take a hit.  Like a bucket of sand.  Or a barrel of sand or water.  Whatever you can come up with.   Just don’t fire it into the air.