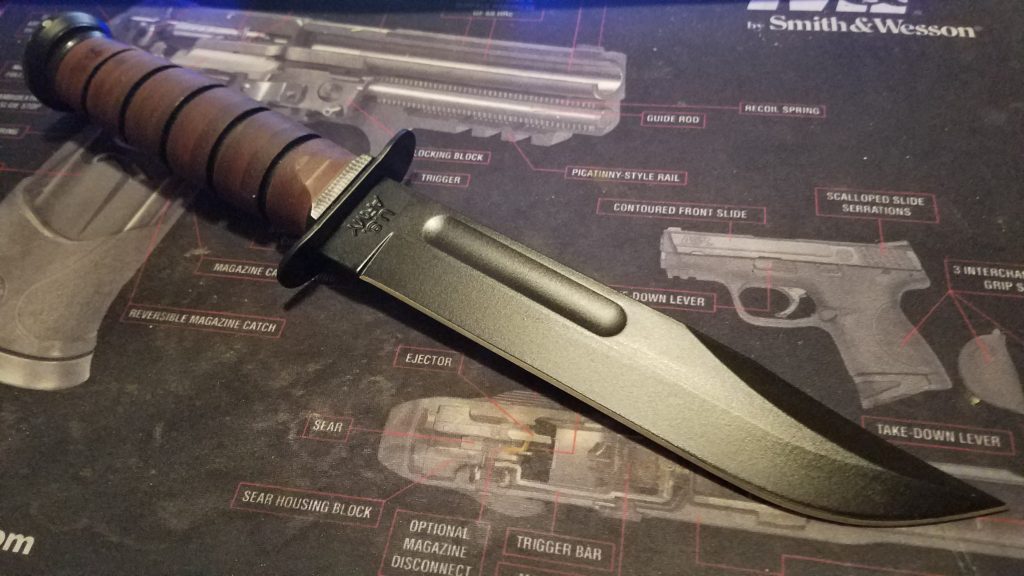 This knife is The Classic Military Knife, and to me, just as Iconic as the Willis Jeep, Leather Bomber Jackets, Thompson SMG’s, and Sherman Tanks.  It screams History, Heritage, and Tradition.
I’m not going to go into the History aspect of it… I don’t need to.  Its been spoken about for generations.   This one is stamped “US ARMY”, as all the best ones are… Just sayin…
END_OF_DOCUMENT_TOKEN_TO_BE_REPLACED

Might not be a popular concept, but it pans out. The wicked taketh the truth to be hard. Working with vets suffering from PTSD showed me very clearly that Servicemen who had faith, then went through the trauma and lost it – are truly at great risk. Having faith to begin with helps a great deal. Because there is a huge aspect of Self Worth for the individual soldier and faith helps one feel his self worth. Doesn’t matter what your faith is – You don’t have to be issued a religion. But a Belief is powerful here. I think a great many fall because The Adversary tears a marine’s or soldier’s faith down, then tears down their self worth… then he has them. If they keep the faith, then that armor protects them.
Now the Adversary wants to regulate the Faith out of the Soldiers and Marines.  Which is only going to result in more suicides, more pharmaceutical treatments, more mental health cases that cause loss of gun rights and more institutionalization where all of it could have been taken care of with Faith.

According to the Military Times, the US Marines are looking to officially pick up an off the shelf 1911 for it’s MARSOC program.

The choice is between the Colt Rail Gun and the Springfield MC Operator.

Between the two, I’d pick the Springfield in a heartbeat.  Springfield has shown consistent quality control and a commitment to its customer base by backing up their products with the industry’s best customer service.  Everyone I know that has one of these MC Operators has been more than impressed with them.  Accurate and reliable.

One thing I don’t understand is why the Operator instead of the TRP?  The Springfield TRP Pro was the pick of the FBI Hostage Rescue Team…. a group that is a little picky about their weapons, and absolute artists when it comes to the application of those weapons.  The TRPs roll out for about 1500 bucks and the MC Operators for about 1200.  But money isn’t a question for these guys.  It’s not the rail, because we’ve seen TRP’s with and without rails.  Mayhaps the MC Operator is more reliable than TRP?  Hmmm…

Iran looks like it wants to tussle.  The US is more than game.  Iraq was more of a threat, and we rolled them in a matter of hours.  Iran will take less time.  Unless we station troops and move in and try to set up housekeeping.
I’d suggest a blitzkrieg, sink their ships, demolish their military assets, and all of their suspected nuke sites… Then get the Hell out of dodge before the dust settles.
George Bush’s big folly was the Mission Accomplished sign while we still had boots on the ground.  Let’s not relive that mistake.
Take all US Forces in the Stan, get them ready to roll… Then wait for Iran to blink first.  The moment they twitch, nail them.  Follow Sun Tsu’s advice. Hit them first, and hit them so hard that they can’t hit back.  Don’t look at the explosions, just walk away. Done.  Then when China talks Shit, we can just crack our knuckles and grin.

There is one Aircraft that the US has that outshines all others.  There is a lot of gnashing of teeth over the loss of the F-22 program and the failings of the F-35 program… we’ve retired the F-15 and F-14’s…

But we still have these… and they work harder and pull more duties than any other aircraft we have.

The topic of military charities has come up and two Orgs stand out.   The USO and the Wounded Warrior Project are two that stand out the most to me and some others.   I’ve had some positive experiences with the USO and one time they really helped me out when I didn’t even ask.  END_OF_DOCUMENT_TOKEN_TO_BE_REPLACED

This is interesting… for those that double female military capability:

I find this to be an interesting follow up to the previous topic. What wasn’t reported in the news clip here, was that the mission was a success. I wonder how many missions were conducted with an all female crew.

We’ve read the reports that our Woman Warriors in The Stan are being encouraged to wear scarves over their heads.  We’ve read views supporting and opposing this from all directions.  My take on this is a little different.  The way I see it, Male or Female, they are American Warriors.   We should treat all of them the same.  No matter where they are.  And other nations should Fear and Respect them all the same as well. END_OF_DOCUMENT_TOKEN_TO_BE_REPLACED

We need to GTFO of Libya.  We have nothing to do with Libya and we can’t afford to get involved in their internal struggle.  Libya has a history of American Hatred, so they don’t even want our help and they certainly don’t deserve it.  As much as I don’t like that crack-pot over there… he’s over there and has made no threats against the USA.

But what I find most repugnant, is the hypocrisy of this administration.

“The President does not have power under the Constitution to unilaterally authorize a military attack in a situation that does not involve stopping an actual or imminent threat to the nation.

As Commander-in-Chief, the President does have a duty to protect and defend the United States. In instances of self-defense, the President would be within his constitutional authority to act before advising Congress or seeking its consent. History has shown us time and again, however, that military action is most successful when it is authorized and supported by the Legislative branch. It is always preferable to have the informed consent of Congress prior to any military action.”
-Barack Obama, December 20, 2007

So tell me… Where does Obama get off doing this?  In his own words, these actions are wrong.  If this was Bush doing this… Bush would be the most vile and despicable person in history.  But Barry gets a pass… even if his excuse for doing this mirrors Bush’s reason for Iraq.

MARCH 19, 2011
OBAMA: ‘Today we are part of a broad coalition. We are answering the calls of a threatened people. And we are acting in the interests of the United States and the world’…

MARCH 19, 2003
BUSH: ‘American and coalition forces are in the early stages of military operations to disarm Iraq, to free its people and to defend the… world from grave danger’…

I don’t know… maybe I’m just not nuanced in geopolitical matters… I mean, I only took a semester of it in college so I am no expert by any means.  But I do know the difference between right and wrong.  And being in Libya is flat out wrong.  We need to GTFO.

The violence in Libya is horrid and unfortunate… and it saddens anyone with even a small strain of humanity that a government would attack its own people.  Because of this, there has been talk of a US intervention.   This is a bad idea.