I had a message about getting a Springfield 1911 ready for duty use.   The fellow was concerned about having to replace parts, which is a common misconception.  You only have to replace a part if it breaks, and you don’t know if a part is going to.  Preemptive replacing of all the small bits when there is no reason to is wasteful.  A Springfield is a great gun for the basis of a solid duty gun.   The gun is pretty dang good out of the box and I wouldn’t say that it needed much.  But it does need some work.

First, if the gun has it, I’d get rid of the full length guide rod and put in a regular short GI type guide rod and spring cap.  The FLGR adds in more friction, more spots for binding and more friction while it unnecessarily complicates things for no tangible benefit.  Get rid of it.

The rails need to be smoothed out.  Frame and Slide.  These need to be polished.  You can do this yourself with some polishing compound and some elbow grease.  Under the slide, where the hammer drags across it… that needs to be polished as well.  Don’t get too carried away, just make sure it’s smooth.  Sometimes this area isn’t and that’s adding drag where you don’t want it.   I’ve seen some 1911’s where you could pull the slide back a bit and the hammer would allow the slide to stick there.  Let’s take that sticky spot away.

I’d replace the factory Springs with a Wolff spring that’s 2 pounds heavier.  Duty ammo is a touch hotter, so that extra grunt is going to help buffer slide battering, but more importantly the extra push in the slide is going to help chamber a round that might not otherwise want to feed all the way in.  The most common jam in my pistol classes with 1911’s when they get hot and dirty is a failure to feed.   Usually the slide stops about a quarter inch short of home and a tap with the palm of the hand to the back of the slide usually does the trick.  A spring that is a little stronger reduces that type of jam.  Some guys think that they have to ream out the chamber and throat… when really all they need is a smoother action and a stronger spring.   Now, sometimes you do need to have a chamber and throat job.  But most of the time, you don’t.  And most of the time those guys that think they do are running Handloads and blame the gun.  Sure “Factory” runs fine, but with your absolutely flawless handloads – must be something wrong with the gun… they made the chamber too tight.  Uh huh.

Lubrication is critical.  This is why Crusader made Slipstream Weapon Lubricant.   Clean your 1911 with MPRO-7 Cleaner completely.  Get some Slipstream and soak that 1911 in it… apply it generously to all the moving parts and friction bearing surfaces and work that in.  Cycle it by hand a hundred times.  Then strip it, do it again.   Now, get out to the range and go shoot it.  A lot.  Then clean it and Slipstream it again.   The Nano Lube that makes Slipstream black… those particles… will get into the metal, imbed in the surface and will seriously slick that gun up.  This is beyond what your favorite oil can do.  I’ve a Springer GI – nothing fancy.  But it’s slicker than a Nighthawk Custom and it’s never jammed on me… Since I Slipstreamed it.   500 rounds in a single day?  No problem.  No failures.

Smooth, Simple, Slick, and Strong… that’s what the 1911 needs to run flawlessly.

That and Factory ammo.   Speaking off ammo.  We all know the 1911 was designed to run Ball Ammo.  Modern Hollowpoints sometimes don’t run in 1911 without a little work.  Typically those rounds being 230 grains.  I’ve seen many times, and once even in my own Springfield… where a 230 grain JHP round failed to feed.  But the same load using a 185 grain ran flawlessly.  These were Hydrashocks in my gun, but I’ve seen the same thing with others JHP’s.  Going down to 200 or 185’s generally let finicky 1911’s run perfectly.  I happen to prefer Medium to Light bullets for caliber in handguns.  In my experience most guns seem to shoot better than using that rather than heavy for caliber loads, such as 230’s in .45 or 180’s for .40.   But that’s just me.

We finally got in one of the famed Springfield Range Officer 1911’s. The simplicity and plain appearance belies the nature of the gun. It’s truly a Sleeper… a Q Ship.  I’ll let the pictures speak for themselves. 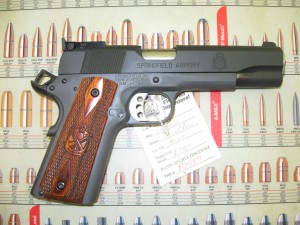 END_OF_DOCUMENT_TOKEN_TO_BE_REPLACED

We got in a few of the .40 XDMC’s…  You know, while at SHOT I took a look at them and at the time they just didn’t blow my skirt up.  However after handling the production gun here… taking some more time to examine it…

I like it.  It’s the first XDM that I could see myself getting if I was in the market for a Sub-Compact sized Poly-Striker.   The grip is short, but it works.  The 3.8 inch barrel and related sight radius makes getting a good Sight Picture easier than on other sub-compact guns.   And the XDM’s lines seem to work better with this hobbit sized grip.    I give it my nod of approval.