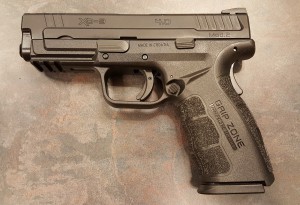 The XD MOD.2 Service.  A new XD I could actually own.

This is the best rework of the XD series Springfield has.  I like this better than the XDM.  The new MOD.2 is shaped right.  It fills the hand without being too large and is just grippy enough to be be grippy without being abrasive.  The regular XD’s and XDM’s feel slick in my hands… .and for that reason I just don’t take to them.

Had this been the design back before I got my Glock 23 – I think I could have been very likely to have selected one of these.  Now look at the Slide and Frame contours… You know what?  The XD isn’t ugly anymore.  It’s grown into quite the handsome figure.  I like the slide serrations.  They did a great job.
There’s just one problem. 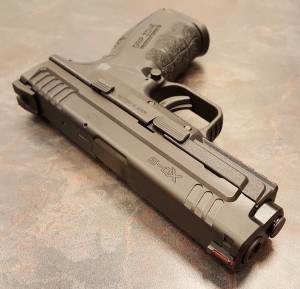 “GRIP ZONE”?  Seriously?  Where’s the “SLIDE ZONE” markings?  Captain Obvious needs to stay out of the Design Room at Springfield and maybe take a holiday to eastern Syria.  GRIP ZONE… Who approved that?  Who did that?  Who is responsible for GRIP ZONE?  If you know who that guy is… Mark his face with a Sharpie “SLAP ZONE”.  Please.
Other than that… Home Run, Springfield.  Home Run!  I’ll be waiting for and 3.8 Compact Mod.2 in the XDM series…  But this is tempting. as it is.  Very well done, Springfield… Bravo!

The Springfield XD pistols.  Just horrid looking.  Oh, they are indeed good guns… but the are hard to look at.  The M’s are better looking, but not by a huge amount.  Like the West Virginian Cousin of an Okie.
Springfield really needs to just drop the XD line and lower the price of the XDM’s.  The M is all around the better pistol in every caliber and size.

As mentioned before, I had a little range time this morning.  All the Gun Counter Guys met at the range at the Crack of Dawn.   Sunrise just coming up, it was a beautiful day at the Buckskin Hills Range.  We did a little shooting with the Springfield Armory Rep.

Shot an XDM, the XDS, the MC Operator, and the EMP 9mm… I had little interest in the other pistols.  The XDM’s are what they are, just fine pistols and I like them for what they are but they are just not for me.  The M I tried is a variant with a fiber optic front sight and an open topped slide.  It shot very well, as I expected, just like all the other M’s. And regular XD’s I’ve owned.  No failures.  The accuracy was very good.

The XDS, Springfield’s new subcompact, single stack .45, is an interesting pistol.  It also shot very well, was accurate and while snappy, was controllable.  It is a great little defensive tool.  I wanted to like it, but I just didn’t.  Here’s why – and why I’m not hot on all of the XDM’s… it’s the Texture.  They feel slippery in my hand.  I could probably buy an M, the 3.8 Compact, as that remains my favorite of the group… but I would have to rework the grip.  So I guess my hangup is one that is rather easily fixed.  If you have an M, you certainly have a fine sidearm.  If you are looking for a pistol, absolutely take a look at the XDM’s.  The S, isn’t for everyone.  It’s for guys that want that subcompact .45… but don’t trust a Sub-Compact 1911.  It’s one of the very few sub-compact .45’s that I would have any confidence in.  I’d have to work the grip of course, but as good as it shoots, it’s certainly a good for it’s intended purpose of CCW.

Here’s one that surprised me though… the EMP 9mm.  I shot one before, in .40 and I was “Meh” about it.  But the 9mm version is somehow different.  It blew me away.  It shot exceptionally well.  Very accurate.  It did give me one tiny hang up… a failure to go into battery.  A quick smack on the back of the slide did the job and the gun fired and cycled just fine and it never gave me a hang up after that.  What this gun needed was to be cleaned and oiled.  It was bone dry and filthy from the Basin Sports Factory Range Day last week.  Some Slipstream Styx would make it run like a sewing machine.  The recoil was… not even there.  Impressive little gun, and a great CCW option.

My favorite Springfield handgun though… the one I kept coming back to… The 1911 MC Operator.  As you guys know, I’ve said that the top Production 1911’s are SIG’s, Springfields, and Dan Wessons.  I would put STI in there as well, but those are more Semi-Custom like Wilson, Nighthawk, and Les Baer.  And I admit I need to get to know STI better, I’ve only fired a grand total of 3 STI pistols, and each one was a custom gun from them, Larry Correia’s Cheater Heater, and two full blown race guns.  Wait.  Where was I?  Ah… the MC Operator.  I hate to say this… but I liked it better than my TRP.  Yeah, I said that.  The TRP is Springfield’s Flagship Badass 1911.  But I just like the MC Operator more.  It feels better in the hand since it doesn’t have the aggressive “Wood Chipper” checkering for one thing.  It’s also just a more humble, Get it Done and Let’s Go Home vibe to it.  Reliability was great… not a single hiccup of any sort.  Accuracy was the best out of all the handguns… Let me clarify that.   My ability to be accurate with this pistol far surpassed the other handguns I fired today.  The EMP was accurate, but I had to concentrate more with it.  With the MC Operator, accuracy was effortless from the very first round I fired.  And it felt GOOD in the hand.  Not just holding it, but it felt good firing it.  Not all handguns feel good during the firing cycle… This one does.  It’s the Winner of the Day for the Pistols.

Rifles.  Well, you guys know Springfield has only one line of Rifles and those are the M1A’s.  Springfield just has a few variants of that platform.  I love the classic standard wood stocked M1A for it’s look and feel.  What a great gun.  Shooting that thing gives me a warm fuzzy feeling in my heart.  Everything about the M1A… it’s awesome.  It’s a part of Americana, like a Ford Mustang, Classic Rock, and a Coke. Metal and Wood.  It’s beautiful.  You can’t Not love it.  If you don’t love it, just go away…. I don’t even want to know you… You would have to be like one of those guys that don’t like Dogs or Bacon or Firefly.

The one that made me grin like a 14 year old who just found a Playboy…. The SOCOM 16.  See, I shot the SOCOM II before and yeah, it’s cool.  But it’s like Cool that’s Trying Too Hard.  It’s the one with all the Rails and the extra six pounds of heft and discomfort.  The SOCOM 16 is more unassuming.  Oh, don’t get me wrong… it’s a Thug.  It’s the Snubnosed, lightweight, easy to handle M1A.  Where as the standard M1A’s are full length Battle Rifles, the Sweet 16 is chopped down stealthy street fighter.  I like them before compared to the II’s when looking at them in the store.  But I had expected them to kick a lot more being so much lighter.  They don’t.  It’s surprisingly soft shooting.  Something about it is… addicting.  I really like it.  This is the .308 for a Door Kicker.  It’s very cool how short it is, while still being perfectly legal.  It feels like a Sawed Off, and it kicks less than the full sized.  If I got one of these Sweet 16’s, I’d have Gundoc (Joe at Crusader Weaponry) work his M14 Magic on it… because he’s a wizard with the M14/M1A’s.   I’d have him slick it up, trigger job, and Cerakote all the exterior metal a nice Dark Grey… that would contrast nicely with the black stocks.  That’s it.  That’s all I’d do.  I’d just keep it simple.  Slick, Sexy, Simple.    Man… I want that now.

I have some Video I’ll post up this weekend.

We got in a few of the .40 XDMC’s…  You know, while at SHOT I took a look at them and at the time they just didn’t blow my skirt up.  However after handling the production gun here… taking some more time to examine it…

I like it.  It’s the first XDM that I could see myself getting if I was in the market for a Sub-Compact sized Poly-Striker.   The grip is short, but it works.  The 3.8 inch barrel and related sight radius makes getting a good Sight Picture easier than on other sub-compact guns.   And the XDM’s lines seem to work better with this hobbit sized grip.    I give it my nod of approval.