I know a lot of guys that enjoy Mixed Martial Arts.  One of the outlets of that is the UFC.  Well, the UFC has now banned Shooting and Hunting Sponsors. Shooting and Hunting Sponsors have helped and supported a lot of MMA Fighters the last 10 years.  This isn’t so much for cutting off the advertising for the gun companies… but for them cutting off what is essentially our support for their sport.
This is highly insulting.
So what we need to do, is to vote with our wallets.  If our sponsorship isn’t good enough for them, then our money isn’t good enough for them either.  We need to get the word out, that Shooters and Hunters will now not patronize the UFC.

I know a lot of Shooters who insist that Good Old WD-40 is all they need.  Maybe it does a lot of things well.  Okay, I know it does a lot of things well… But Firearms, fishing reels, locks, is not something you want to use it on, because it gets gummy after awhile. Read this.  All the way to the end.  Do you really want that in your gun?  Seriously?  You can think of nothing better?
Okay, we all know WD-40 doesn’t really have any Fish Oil in it.  But the fact remains that it’s a Water Displacement product that functions as a poor cleaner and an even worse lubricant.  I’ve been told by a lot of old school gunsmiths that they always use WD-40.  That’s fine.  But these guys were not really good gunsmiths.  The better gunsmiths that I know, will use Kroil.  It gets under the gunk, rust, and stuck parts because unlike WD-40, Kroil is a Penetrating Oil.  And it’s awesome for that.  I’ve used it myself working on several firearms… most recently one of my own 870’s. It’s a liquid tool and does it’s job well for what it’s for.  But again, it’s not a great Lubricant.  If you want a good Lubricant, use Slipstream.

NPR has an interesting story. “How the Glock became America’s Weapon of Choice.”  Granted, it’s my Choice, but is it America’s Gun?  As far has handguns go, it is very popular with Law Enforcement on the Municipal level.  But on the Fed level, it’s the SIG.  In civilian sales, we have the XD and the Beretta 92FS, which has had a large resurgence in sales.  Huh, and there isn’t even a new Lethal Weapon movie out.  But if I had to pick one gun as “America’s Handgun” it would have to be the 1911.  Because that’s what most guys that come to the gun counter look at the most.  Even if they come in to buy something else, their eyes and their hearts linger on the 1911.   As does my own.  I love the 1911, but I don’t I am packing it as a carry gun less and less all the time.  I’ve only carried one three times that I remember this year… Of course this year is only 24 days in, but the entire rest of the time it’s been my Glock. There is something about the 1911.  It’s organic, beautiful, powerful,timeless and elegant… things the Glock is not.  But the spirit of the genius that went into the 1911… is found in the Glock.  The simplicity is actually stunningly brilliant.  Using a Striker system with the safety built into a transparent system for the user, it’s the easiest handgun to learn.  Or was, when it came out.  The Glock has been copied by so many other maker’s now, it’s silly.  Just like the 1911.
However the question NPR asked, was is the Glock America’s Weapon of Choice.
The answer is no.  Not even close.
The weapon of choice is AR-15.  The rifle that outsells ever other type.  The rifle that people who had never owned a gun before, snapped up after Obama became president.  The rifle used by our Military, Law Enforcement, and Sport shooters more and more every day.  Because while Handguns are popular, America is a Nation of Riflemen.
This is demonstrated in Ammunition Sales.  Just restocking ammo, we are constantly restocking .223/5.56mm.  More than any other caliber.  More than 9mm, .45, or the others.
The AR-15 is accurate, low recoil, cheap to shoot, and potent enough to be useful on anything up to deer sized creatures. (Even if that’s ethically  questionable)

You know, I really do like my Glock.  I like it the more I carry it and shoot it.  I’ve seen the M&P making serious inroads on the Glock… and the new Gen 4 Glock series has left me feeling luke warm on it… I certainly prefer the Gen 3.  But that’s just me.

That’s the Buffalo Burger.  You get them HERE.  When Crusader gets together on a special occasion, we make it a point to get some Buffalo Burgers at the Bohemian.  If you are anywhere near SLC – You must get one.  When you order it, order it “Rare”.  If you order it Medium – it’s over cooked. 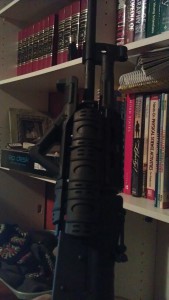 While popping in for a visit to Get Some Guns to test out our Broadsword Rifle, I picked up a MagPul AFG for my Kalash.  At Crusader HQ, I also applied a permanent Slipstream treatment to my AK’s bolt/carrier group.  Slicked that up big time.  AK’s are never to be considered a Slick Rifle… and this one is still not so much. However, compared to other AK’s… DAYUM.  This is one SLICK freaking AK!  I love it.
Okay, back to the AFG… I didn’t realize that Magpul now makes two versions of the AFG, the normal one and a smaller thinner one.  For my AK, I went with the Regular Full Sized Magnum AFG.  It fit really well.  It looks awesome and feels awesome.  I love it.  Video review of it will be made soon.

I can’t stop playing with this AK now.  I took it to work hoping I’d get a chance to run out to the range on my lunch break to pop some rounds, but that didn’t happen.  Instead I pulled off the highway on the way home from work after close – after dark – and drove about 200 yards (honest officer, I thought I was 200 yards) down a dirt road.  Blasted through about 40 rounds of 7.62x39mm.  I wanted to shoot more, but it was pitch black and I had no targets… but man.  That was fun.  AK muzzle flash in the dark is fun stuff.   The gun is nice and controllable and I find that the AFG helps me get into proper position naturally.  I just naturally Vulture Down on the gun.
Did I mention that it looks sweet?  Oh yeah.  It looks awesome.
The AFG solves a problem with using a Vertical Grip.  I have plenty of room to rock out a mag and rock in a new one.  A VFG can block the mag from rocking.   And I want to rock as much as possible… so there you go.

This is what happens when you let Gunners on a Golf Course.

We’ve all been checking out the reports coming out of SHOT show about the new guns and gear and everything.

Two handguns that I am looking forward to checking out in person.. The new SIG P938 and the Springfield XDS.  I’ll take that 938 in the Extreme layout and the XDS in a .40 when it comes available.

Another interesting gun is the new 1887 T Series shotgun.  This would go perfect with your Terminator Costume.

Blade wise, KaBar/Becker has some great new blades that I am really liking… but that’s another post.

Uncle Musket needs one of these.

Ask and ye shall receive.  But Magpul didn’t do it.  US Palm did it.  Bravo!