This was one of those “What the hell, I’ll try it” sort of things.  With a big “I’m glad I did” sort of results.   I was in the market for a new stock, but not exactly for a pistol grip… so I’d likely have passed this up until our friend Ryan Horst at Tannerman’s Trading Company offered this to me. 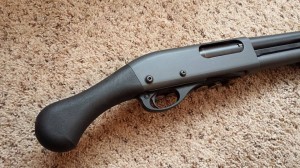 This is a synthetic product that is reminiscent of the results of the old school mod of chopping down a standard wood stock.  It’s got that look and feel, but with a better finish.  Compared to some other pistol grip, or Breacher grips out there, this has a better look and feel.  Better in that it looks more traditional.  It is both solid and comfortable and during recoil, it feels more comfortable than most standard pistol grips out there. 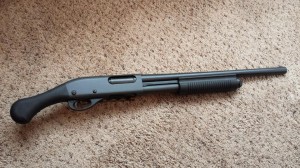 Mounted on a standard factory Remington 870 HD model, it helps make for a nice compact Home Defense weapon.  It begs to be used on an SBS or AOW shotgun.  The Raptor Grip is not for everyone.  The purpose is more specifically CQB in tighter areas, or for where you need to transport a potent weapon in as compact a package as possible.  This isn’t for any Duck Commanders out there. 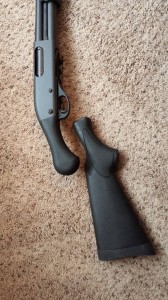 You can see it removes a lot of length from the weapon, while keeping a legal OAL.  Any shorter here and I’d have to be doing some ATF Paperwork.

Available from Shockwave Technologies.  For the Remington 870, NEF and H&R Clones, and IAC Hawk shotguns.   Also available for Mossberg 500 and those related shotguns.

Please stop what you are doing. Just stop it.

Your Lever Action SPX. Stop it.
Your huge Breacher muzzle devices. Stop it.
All of your Bolt Action Rifles. Just stop it.
Your Road Blocker and Chainsaws… STOP!

You have become the BUDK Catalog of the Firearms Industry. I now CRINGE every time one of your boxes shows up… I’m afraid to open it and look in for fear of what fresh new hell you decided to unleash.
I can’t take anything that says Mossberg on it seriously anymore. Your 930 and 590 series guns are awesome, but even then. It’s like telling a young person that I loved the STARSHIP TROOPERS book because the Movie is so fucking retarded. A lot of newer shooters don’t know what a 590 is, and instead smirk at the Mossberg name. “Hey, the 590 is a great gun!” I come off sounding like a Nutter. This is what you have done to yourselves, Mossberg.
This is why there is no more EXTREME SHOCK ammo… No matter their ammo was actually great, their company Image had become such a joke, they couldn’t be taken seriously anymore and they had to shut down and completely restructure to regain some traction.
This is what you need to do, Mossberg.
You are trying to market to the same guys that want COUNTER SNIPER OPTICS, Big Low Pressure Petroleum Fireball Explosions, and “STACKED AND PACKED” Calendars. You want Video Game Players. Your Target Audience is CALL OF DUTY. STOP THAT!
Have some Self Respect, Mossberg! If I go to SHOT and see something like a CHAINSAW LEVER – I’m going to fucking slap the shit out of you.

Over on Facebook, Jerry Miculek posted about a young lady getting her new JM Signature Mossberg 930.  This sparked much though.  Jerry is a great guy and I have had the pleasure of meeting him and talking with him at a SHOT Show “Media Range Day”.  He is a Gentlemen to be sure, and one of the very best shooters in the world.  He’s putting his stamp on a Mossy 930 should be more than enough to squelch all the Mossberg Haters out there.  Mossberg makes some very good, solid, and reliable shotguns.  They also make some real stupid crap as well… More on that later.

END_OF_DOCUMENT_TOKEN_TO_BE_REPLACED

I think Marlin, and by that I mean Remington, needs to stop making the X7 centerfire bolt action rifles.  Marlin is a Lever Action Company… they need to stick to that.  They do fine Rimfires… which is fine.  Remington has nothing in that market.  But Remington making a Marlin branded Savage Knockoff?  Feh… Why? To get that 300 dollar rifle Market?  I thought they already had that with their 770.  Which is total crap, but hey.  It’s at least a Remington.

Now, there is really nothing wrong with the X7 rifles.  It is quite good for a cheap knock-around gun for those that have a hate for Savage and refuse to buy one… so now they can buy the Marlin option, which is a Savage knockoff crossed with a Vanguard if it got drunk with ambition and delusions.  Reportedly the X7’s shoot pretty good.  Especially their heavy barreled .308.  But why would Remington want make that, when they would rather be selling their own 700 SPS Tactical?  I don’t get why they feel the need to make a product that competes with their own product.   Remington needs to squelch that.

I still assert that Mossberg needs to GTFO of the Lever Action market too.

At the gunshop I work at, we got in more of the Mossberg 930 SPX tactical shotguns.  Even though they have had a huge surge in popularity, they are the same price as they were before.  About 600 bucks.  They have improved the SPX slightly.  For one, they gave the SPX a larger bolt handle, which is a large improvement.  They they screwed in a Sling Swivel Stud so you can put on a sling.  Thanks, that’s a nice touch… but it’s not enough.   I have some complaints about the SPX that I’d like to see Mossberg take a good hard look.

I sell these things for a living, that’s what I do.  And a lot of the serious shooters out there just can’t take Mossberg’s semi auto seriously, and will buy a gun that’s 400 bucks more money.  Why is that and what can be done to fix it?

1.  The forward handguard feels loose.  It doesn’t feel solid and secure.  This gives the whole gun a cheeper, lesser quality feeling.  I know the gun is good, but when the handguard is shifting around, it’s hard to convince someone that’s it’s okay.  A tactical shotgun should be as solid as a Louisville Slugger.   Mossberg just hasn’t got this yet.

2.  This new aftermarket sling swivel stud looks like someone just screwed it on before they took a lunch break.  That just screams chinsey.  A simple bracket like what Wilson Combat sells would work perfectly, look cool, and would be easier and better to use for those who use shotguns for serious purposes… like… who you’re selling the SPX to.

3.  It doesn’t come with a mount for a pistol light.  The addition of a simple bracket around the mag-tube and barrel that puts a short rail up front would go a long way.  Instead you (Mossberg) are forcing your customers to go buy that part from someone else.  You make that part and you sell that part.

4.  No chokes.  What makes a Shotgun so great is it’s versatility.  With removable chokes, an operator can tune his gun and load in together for whatever situation.  This is one of the main reasons I sell tactical shotguns that are 400 bucks more.   Serious shooters want to be able to use the right shell for the job, and if they don’t have the ability to change out a choke tube, then that’s a handicap.  A big one.

If Mossberg does these few things… the 930 SPX can be transformed from a “Great gun for The Money” into a World Class gun for Serious Shooters.

As regular readers of MadOgre know, I like to Armchair Quarterback a Gun Company every once in awhile. No company will ever be immune to my examination. I’m in the mood to take a closer look at Mossberg.
The reason being, is that I think Mossberg is a great gun company and I really like some of the guns they make. The 590A1 is a gun I used as my Patrol gun a long time ago and it was truly dependable. The 500 platform has been a workhorse pump action shotgun, second only to the iconic Remington 870. In fact, that’s been a big “Ford vs Chevy” debate for many years now when it comes to shotguns.
Now Mossberg has a fantastic semi-auto tactical gun, the 930 SPX which I have been running for awhile now and it’s been serving me flawlessly. In fact, it’s so good that it’s made me reconsider my whole outlook on a semi-auto shotgun. Congratulations, Mossberg… You have done very well.
Now let’s take a look at your new line up. You have some interesting guns.
Your Blackwater Series looks like a good line up. The 590A1 looks like it’s set up “just right”. The XS sights and the rail on the top. A+ on that one. Having used the 590 series guns extensively, let me tell you what it’s all about in one word. “Rugged”.
END_OF_DOCUMENT_TOKEN_TO_BE_REPLACED