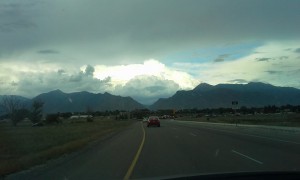 I’ve been looking for suitable jobs for me in Utah, as my family would like to move back.  They are Utah at heart.  And I have to admit, I’ve enjoyed visiting again, very much.

Hanging out with Steve Ting again was awesome.   We went to Sean’s Smokehouse BBQ and then to a sporting goods store – Sheels.  Impressive place.   Sean’s Smokehouse – that place is awesome.  The food is GOOD BBQ.  And I’m picky.  Everything I sampled was excellent.   But more importantly, Sean’s supports the RKBA, as evidenced by the decor: 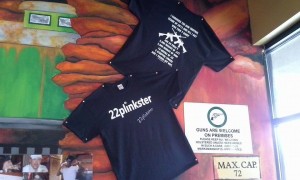 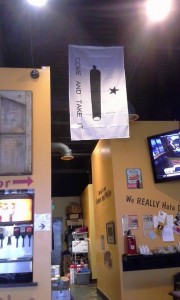 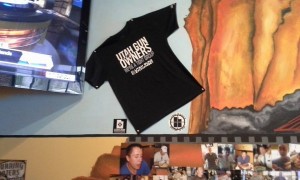 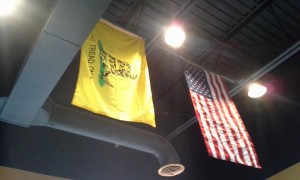 They have a Hot Wings challenge that I will, one day, defeat.   Great food, did I mention that?  The place is awesome.   Look it up and check it out.

I’ve got a lot of friends here that I would love to go shooting with again… I did get a chance to go shoot some Prairie Dogs with Ben Thompson.  Which was very good and therapeutic.   But to be honest, I just didn’t feel the blood thirst that I used to.  But a couple really good pops with the .17 HMR was satisfying. 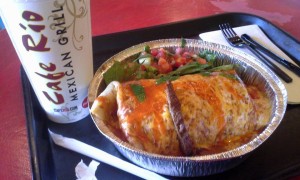 I think I would really love to move back to Utah’s Wasatch Front area.  Probably on the southern side of it.  I tell you what though… Cafe Rio.  Utah has a TREASURE in Cafe Rio.  Chipolte is popular and common – but not nearly as good.  Cafe Rio smokes Chipolte and all the other places like it.  Chipolte’s is good… but the flavors tastes off in comparison.    So you Utahn’s or those that live near one – ENJOY it.  Savor it.  Seriously.  I could go there every other day.

The traffic is bad… but honestly, after dealing with Atlanta’s traffic, Utah’s worse isn’t really all that bad.  Except for Draper.  Draper Utah is just… Retarded.  No where else the NO EYE CONTACT GETS THE RIGHT OF WAY rule is in such effect.  That and you can’t make Left Turns where you need to, but you can make U-Turns where you don’t.   Draper is the model of Bad City Planning.

Vernal has grown and changed in some places and has stayed exactly the same in others.  Basin Sports is still THE place in Utah to buy your guns and gun related products.  But there is no way I could go back and work there again.

The first is the Second Amendment Preservation Act.
This bill declares that the regulation of firearms is reserved completely to the state and provides penalties for the prosecution of anyone attempting to enforce federal laws to the contrary.

What that means is Utah can stop and could prosecute any Federal Agent attempting to enforce an unconstitutional Federal Law.  This gives serious teeth to the letter the Utah Sheriff’s Association sent to Obama.   Basically the State is backing up it’s Sheriffs.  This is a very good thing.

The second is Concealed Weapon Carry Amendments.
This bill would give Utah “Constitutional Carry”.  Also known as Vermont Carry.  This means quite simply, if you are legal to have a gun, you can carry it concealed if you are over 21.  No Concealed Carry Permit required in the State of Utah.  Looking the bill over, you would of course still need a Permit if you cross State Lines.
What I’d like to see here is a line that says something to the effect that Utah would honor other Constitutional Carry States Citizens rights, if that state honors ours.  For Example if you are from AZ, you could come to UT and carry concealed if UT residents could do the same in AZ.  A Constitutional Handshake if you will.

What’s amazing about HB76 though is that it’s sponsored by John Mathis.  The guy I ran against for public office and destroyed in the debate in Moab.  (Not my opinion, that’s what I was told after the event by several residence of Moab)  John has been just about completely useless up until this point.  But him sponsoring this bill… I’m impressed.    Honestly, I’m shocked.  I was planning on running against him in the Republican Primaries next time… but really, if this passes, I wont have to.
Now, if he will just remove the law about it being illegal to fish from horseback…

The State of New York is going to pass the Micro Stamping requirement. They do not believe you would actually move out over handguns stamping as they are a smaller portion of your business.
Well, here is the thing… your customers are not going to want stamped guns.  Its bullshit science, easily removed or worn off, its a useless requirement.   But is going to do this regardless. NY thinks you guys are blustering.
The stigma of rolling over and doing the stamps is going to hurt you worse than just pistol sales. I sell a lot of rifles, tons of Remingtons. I can easily see the customer base turn against you, even here where you are hugely popular.
Look at S&W and the Department of Urban Housing Agreement.  S&W almost didn’t survive that, and they are still suffering from it today.
You guys need to move to a state where you would be cherished, appreciated for who you are.
Come to Utah.
A state that has one the highest guns per capita than anywhere else. Not only come to Utah… but come out to Vernal, Utah.  We have the highest per capita in the State.
Just saying…. why live where you are not wanted?  Live where you would be loved!
Besides… Utah was built by people leaving New York.  Its like a tradition.

Congratulations to UDOT for creating the most dangerous road that I have ever ridden on.  Highway 40, going through Strawberry.  A few weeks ago I rode through and watched a couple on a motorcycle go down.  That was due to the uneven layering of the road surface, and they way that UDOT directed traffic through it.  Now the road is finished.  And UDOT managed to create a surface that is not just slick, but also collects water and doesn’t allow it to run off.  Sunday I rode through during a thunderstorm.  It was absolutely scary. But I made it. I posted this on Facebook:

The hariest part of the ride was going past Strawberry with it’s newly refinished surface. Water doesn’t run off there. It collects. So to avoid hydroplaning, I threaded my tires in the track of a truck in front of me that was doing 75-80 MPH and I was going through where his tires splashed the water out, before the water came back in… if you know what I mean. It was either that, or go 40 MPH and risk getting run off the road. So it was dicey.

Another rider didn’t make it.

I point my finger at UDOT for totally crap engineering of the road.

Is summed up right here. 25K to Harry Reid?  Let’s also not forget he dropped being the Utah State Governor so he could accept Obama’s appointment to be Ambassador to China.  Yeah, I don’t think I could play ball with Huntsman.

Now, don’t get me wrong, I appreciate the Huntsman family and everything they have done for the State of Utah… The Huntsman Cancer Institute is the best in the nation.  When my Grandfather was stricken with cancer, he went there… and he was treated with the utmost dignity and careful attention… better than any hospital treating any patient I have ever seen.  I appreciate that greatly.

But I could never vote for any Huntsman for any office.  Sorry.

So today I get a phone call from the Libertarian Party.  Evidently my membership in the party has been absolved.  What’s strange about that is that someone from the Libertarian Party HQ had to personally call me to inform me of this.   It’s kind of funny, because I thought it was kind of a given when I didn’t send them another check to renew my membership card.   Well, I’m just completely heart broken.

To make me feel better, I did get a personal invitation by the Governor of Utah for dinner.  Awe… that’s so nice of him.  Too bad I’m two seconds away from giving the State of Utah the middle finger.  I’m not actively looking to relocated, but let me tell you… I get a decent job offer in another state – I could be very tempted to take it.    Utah State has pissed me off.   Retarded laws and policy and procedures.  My tolerance is very low for Utah’s bullshit.  If you guys know of a good job, suitable for an Ogre, give me the heads up.

Last year, when I was running for State Rep, I listened to my opponent talk about his support of Education.
I’m sitting here looking at MASSIVE cuts to Education, when the State should be investing in it. Now, more than ever, we need to put money into education.
Hmmm… I thought the people elected someone who supported Education.
Way to go, John.

I had an interesting conversation with a pretty important figure in the community. He encouraged me to run again for the State Legislature. Next time on the Republican ticket. He said that while it would be a tough race for the Primaries, but winning that, I’d pretty much walk into Congress. He dropped some names on me of people who would support me. It’s tempting. I said that I would give it the utmost consideration. The support that I had was incredible, and knowing that I would have more really is encouraging.
However to be honest, the process of campaigning was draining. A lot of work for very little reward other than “Just Doing The Right Thing.” The compensation for being in office doesn’t equal the expenses that I would have being out in SLC while the House is in session. I was willing to do it before, but it was a lot to put my family through. We made a lot of sacrifices as a family, and I don’t want to ask them to go through that again for another run at the House.
State Senate on the other hand, that’s a different story. If I was to run for office again, it would be for the Senate and right now, the man in that office is unassailable. I’d have to wait until he was more vulnerable. So until then… I just have to say “I’ll think about it.”