Both Joe and I will be going to SHOT SHOW 2013.  While there, we will be interviewed by a pretty big magazine in the gunslinger community.  We will be making contacts, taking names, and generally kicking ass.  I’ll be interviewing some people, taking pics and vids and such.  A group of Bloggers are going to be meeting for a lunch one of the days there.  It’s going to be a blast.

The gun Rob evaluated is our Broadsword rifle with an 18″ barrel.  For details on how you can get one of your own, check out CRUSADERWEAPONRY.com.  Contact Joe for a Quote on a built to your specifications.

Our friend Terry did this up for me.  I have something in mind for this. 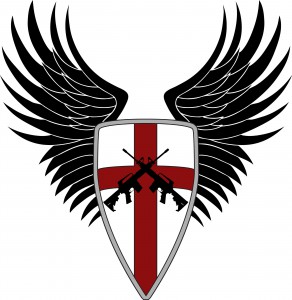 This is the Crusader Weaponry Face Book Group.

We’re talking Guns and Smack… and asking about what Firearms you would like to see Crusader do for you.

So far, the biggest thing is LEVER ACTIONS.  Lots of interest in the Art Of The Dynamic Lever.  Part of me is surprised at all the Lever Interest… and then again, I’m not surprised.  Because while a Lever Action is often forgotten about in this world of AR Type rifles all over the front pages… The Lever Action remains very cool.  Regardless of Caliber, they tend to be easy to shoot, potent, rugged, and reliable.  Accuracy is generally very good too.  I’ve seen some amazing accuracy out of customized Levers.  And the great thing about a Lever is that they tend to be light weight and maneuverable.  No box mags hanging out, no pistol grips.  Just straight forward killing potential.  You don’t Shoot At things with a Lever.  You kill things with a Lever.  The flat ogive of a Lever’s projectile hits with a great deal of shock.  Slapping impact instead of a stab.  This magnifies the hydrostatic shock effect and puts critters down hard.   You gotta love that.

What would Crusader do for a Lever Action?  Well first off, every new lever action I’ve dealt with this last couple years has been far from smooth.  Jarring, harsh, ratchety, when cycling the actions.  This is priority one to sort out.  You want a nice smooth action so you can easily cycle it while the gun is on the shoulder, between shots.  Everything else is icing.  The Permanent Slipstream Treatment is the Medicine for a Lever Action.  That and some Hand Polishing of certain internals to make it “Buttah”.

On YouTube I watched a video by a fellow named James Yeager about how there is no such thing as One Rifle for everything.  He calls it a myth.
I call Bullshit on that.
History is full of instances where a man has just one rifle and did everything with it, just fine.  Survived to tell the tale.  James Yeager is free to express his own opinions, but he is not free to his own Facts.  US History, be it Frontier History, Western Expansion, Wild West, Military History… what ever kind of history you want to call it.  Only in our Modern Email Era do we enjoy having more than one rifle for different purposes.
In this Modern Era, the late Colonel Jeff Cooper considered a One Rifle concept and called it the “Scout”.  His Scout Rifle Concept is a proven winner.  Steyr manufactured their Scout with Jeff’s blessing and assistance.  And it pretty much did what was promised.  Now Ruger and Savage are making Factory Scout Rifles with pretty good success.
Any one of these would make for a fine “One Rifle” solution.
Historically, the One Rifle has been a Winchester Lever Action in .30-30, .32 Special or the like.  Today a good solid and smooth cycling Lever Action is truly a thing of joy.  There are few things you can’t do with a .30-30.  I’ve even killed an Elk with one at 200 yards, and I’m sure I’m not the only person in history to have done so.
Today’s Rifleman though is packing an AR.  The Black Rifle has gone mainstream… and for many new shooters, the AR is The One.  The AR-15 might be kind of light for a One Rifle, but an AR-10 type rifle gives you some considerable advantages in terminal performance on big game.
After some consideration, I’m thinking a new One Rifle is more than doable.    Let’s do that AR platform in .308.  Let’s hit it with a light weight, 16″ True Polygonal Rifled Barrel, and let’s give it some lightweight furniture with an adjustable stock.   Simple, Clean, and effective in most any situation.  Give it an adjustable 1-4 power optic.  Give it a tough finish, resistant to abrasion and corrosion.
Contact CrusaderWeaponry.com to order you a Crusader One Rifle.

The Firearm Blog shows something interesting.  Sliding Metal behaves like a Fluid.

They evidently didn’t use SLIPSTREAM.

When Joe and I first started talking about doing Crusader Weaponry, the goal was very simple and focused.  “To build the very best AR-15 rifles possible.”  That goal was accomplished.  Joe’s rifles have consistently outperformed everything they’ve gone up against.

Then someone asked us a question.  “What lubrication do you recommend?”  Huh?  Oil?  That’s a good question.  We tested everything out there and were not able to make a recommendation.  Some oils worked just fine in the heat of the summer, but failed when it got cold.  Some worked fine for the first hundred rounds then left you high and dry.  Others just flat out were not slick enough.  We wanted to recommend an oil that helped improve reliability when you needed it the most.  So we got to work and came up with Slipstream Weapon Lubricants.  The very best lubrication possible.  We recommend it for all firearms.  Marines wanted something for corrosion protection for Salt Water Environments.  We came up with Slipstream STYX.  Again, the goal was met, and it even provides better lubrication on top of protection.  That goal wasn’t just met, but surpassed all expectation.

Weapons.  Training.  Lubrication.  All this serves a purpose.  We accomplish our mission, so you can accomplish yours.  Crusader Weaponry.

Some of this list is redundant.  Stuff to hang your pistol under stuff… But #7.  Oh man, they hit the nail on the head there!

My AR has been bugging the hell out of me.  The thing was heavy as hell.  No, seriously, we’re talking at AR-15 Carbine that weighed more than a Springfield M1A National Match or a SOCOM II.  It just weighed a friggen ton.

The parts I took off were really not all that heavy to be honest.  The Surefire Rails, Weapon Light Mount and Light, the Rail Covers, Tango Down VFG, and the VLTOR Stock.  It’s just that the MOE stuff with a Pistol type Weapon Light are much lighter.  The problem though really stems from the fact that my AR has Rhinemetal 120mm barrel on it off an M1 Abrams.  Or so it feels like that.  Even stripped, it was still a touch heavier than an M1A Standard Synthetic.   My Take Offs on a normal gun would be just fine.  But that’s not the AR I have.  Mine is a freaking Tank.

Anyone want the goodies I took off the gun?

The Surefire Rails are “Mid-Length”, not Carbine or Rifle.  Who wants to make an offer on the parts?  I take Cash in Person or PayPal and I’ll ship it to you.  I’d like to start the bidding at a hundred bucks.

I have a couple Crusader Jackets here at Ogre Ranch.  Joe gave them to me to pretty much do with what I want.  Wear them… give them to my kids…

But I think I’ll put them to better use.  Slipstream sales have slacked off… that’s the problem with making a product that the more someone uses, the less they need.

So I am looking for people to start Dealer Programs or to get your local gun dealer to carry Slipstream.  If you can start your local dealer carrying Slipstream, I will send you one of these jackets.  Say, the first 3 will get jackets, and the last one will go into a drawing for those after the first three.