In a moment of weakness… I picked up a Weaver Rail that will fit nicely on my Rossi M-92.

What evilness have I brought into my home?  I am ashamed.  Okay… I’ll return it to normal sooner than I thought.   I still might experiment with an optic on it… just so I can get a better idea on the rifle’s accuracy… and then this rail is coming off and another sighting system is going on.  Because the factory sights on these guns are a let down. They are preventing these rifles from hitting their potential.

Now, before you hate me for what I did… I did nothing as bad as what Mossberg has done.  Mossberg took the Lever Action, and defecated all over it.  This rifle just might be put on display at the SHOT Show.  If it is – someone please Falcon Punch the guy at Mossberg that did this.

That is the worst thing I’ve ever seen.  And I’ve seen some seriously nasty things.

UPDATE:  I took the rail off and put the rear sight back on.  It’s as if it never happened.  I’ll look at other sight options.

The Art of War is a book that I’ve read many times through.  The book is simple and straight forward, much like Sun Tzu’s tactics.  One of the things he teaches, is to hit first, and to hit so hard that the enemy is unable to hit back.

END_OF_DOCUMENT_TOKEN_TO_BE_REPLACED 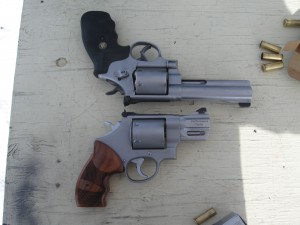 Nightcrawler is an unrepentant Wheelgunner.  He’s also an advocate of the .44 Magnum.  NC sent one gun off to S&W’s Performance Center for special tuning.  The other one, with the short barrel is a gun that S&W gave him as a replacement for a previous .44 Mag that he sent in for repair… which turned out to be unrepairable.    So they gave him some options and he picked this one.  It’s a great little gun.  Looks sexy.  But is exceptionally unpleasant when firing.  The wood grips are just gorgeous, but do not belong on a .44 Magnum firing full power loads.