Unplanned, I sold my bike. An offer was made on my Superhawk. So I sold it. I was surprised, as the thought totally had not occured to me.
Oh well. It’s done. So I shall be getting a new bike. Something that is not a Honda. In fact, its very un-Honda. The Anti-Honda. Something I’ve never had before. It’s also very large and heavy, and that makes me nervous. It’s also ridiculously fast… But not something that will have me riding like I have been. This will be a good upgrade for me. One I can cross the country on… and will. 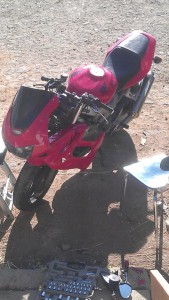 The Superhawk is now operational again. Headlights, tail and brake, and all the instrumentation is working again. I took it for a test ride, and it seems fine. Took the Hawk into town and picked up some new Fuses and I think I’m good.
I need new turn signals and a new Shifter. The shifter right now is folded back on its self and hard to shift with. This is a part that will have to be replaced. Attempting to bend it back will break it. I look at this as a time to upgrade. Racing parts, and I’ll get some LED Turn Signals, I think.

There is something about this Honda Superhawk… It’s very different from other bikes I’ve ever ridden.  I guess its because I’ve never had a V-twin sport bike before. The bike is very deceptive… It feels like a 600, its light and narrow, and is very agile… More like a 600 or 750 than a 996.  But the torque… It come on like a force of nature and the speed builds so effortlessly.  It’s amazing.
I’ve had other sportbikes, I’ve had cruisers… I’ve never had a machine that I enjoyed riding so much as I enjoy this one.  This bike is my favorite out of everything that came before it.  I don’t know what could top it in terms of pure unadulterated pleasure.
EDIT:

Thanks to Horde Member M… Had a brisk ride home after he helped me tighten my chain. He’s rolling on a sports bike too. Hooliganism makes one feel young again for a moment. And that’s a good thing when taken in small doses. My Chain, once to a proper tension, is at the maximum length of stretch. I’m going to replace it. The Sprockets are in better shape than the chain… the chain is in ugly shape. With my Chain Break History, I’m just going to remove that nagging doubt.

Not everyone of my friends understands the Motorcycle thing, and even fewer understand the “Rice Burner Crotch Rocket” thing. What’s funny is that the guys giving me the most crap about also own Japanese bikes and one even drives a Honda car. So “Rice Burner” isn’t exactly holding water… but it is certainly a rocket.

Guys, no, as much as many have said or are thinking… I don’t want to die. Yes, I understand I hold my mortality in my hands, but I don’t want to die. I’m just not afraid of dying. There is a difference, an important difference. I’ve done performance driving courses… I think I would really like to take a Performance Riding course. I’m still green on a Sport Bike, and still learning this bike… I think a course would really be a good idea. 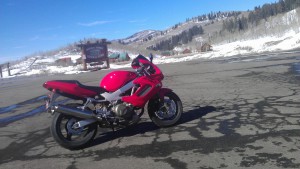 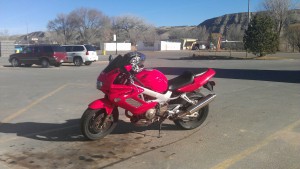