I got this from Tannerman’s in West Virginia. And if you want any Benchmade knife – Go to Tannerman’s.  Before they shipped it out, one of the cats there gave it a custom grind so this thing is hair popping sharp and glides through cardboard like a lightsaber.
I really like the 53 because it makes for a great EDC knife. It’s light weight and has a very usable blade shape. I’ve looked at several online reviews of the knife, but Nutnfancy’s review mirror’s my own opinion for the most part. It’s small. It’s light. And the blade is tough as hell. But D2 needs to be taken care of… and that’s fine for me.
At SHOT Show, I looked at all the Bench Balisongs.  For a knife to carry and actually use as a knife and not a Cheerleader, the 53 was the one to pick, every time.  This also the only one they put bearings in… which helps it flip open because the handles are so light.  Many reviews dog the 53 for not being a Flipper.  But to me, Flipper is a fucking Dolphin, and I hate those damn squeaking fish.  I’m not into flipping Balisongs, or playing Hacky-Sack.  But for some reason I can’t fathom… I’ve always wanted a Balisong.  And since I’m not into Flipping Tricks, I wanted one that I can actually use.  And this #53 fits the bill perfectly.
I even like the color.

Last big rush, we always had .40 ammo on hand. And plenty of it.
This time, we have run out faster than anything.  And we are out of lots of stuff.

The hottest gun selling now is of course, the AR.  We’ve sold hundreds of every kind, as many as we could get our hands on.  People have been buying them like crazy.  We are now completely sold out.  And we sold over 620 magazines… after limiting people to 3 each.  This is the craziest gun buying rush I’ve ever seen.  And the demand is not easing off.

If these sales were because of a spike in popularity… because of Christmas as everyone wants an AR because they are fun to shoot, and awesome to have… This would be great.  This would be a season to remember.  I’d be loving this.  But that’s not what’s been happening.  People are buying rifles like this because they are afraid of a possible ban and they are afraid of the Government.  That puts a sour taste in my mouth for all this.

This is not just here locally… this is Nation Wide.  I even had reporters call me at work and home.  Here’s one report.

As I said in the article, normally I’d be selling deer rifles, shotguns, and the like.  Now it’s all Concealed Carry type guns and fighting rifles.  All AR’s and AK’s are gone and all full capacity magazines.  This isn’t what normally flies this time of year.

I’ve been asked if I was going to get back into competition shooting. I tell you what, I would really love to. I get invitations to matches all the time… and it pains me that I can’t go do them. What’s holding me back? Straight up – I can’t afford the ammo. If I had an Ammo Sponsor, I’d be all over it.

Earlier this year dang near everyone that makes ammunition had sent us unhappy letters. Basically the gist of them all is that ammunition across the board is going to be going up in price, on average about 15%.
The time to buy ammo is right now, before those price increases hit and that cost is reflected at retail. Oh, don’t be so smug, Reloaders… this effects all reloading components as well.
Why is it going up? Global demand on metals, the deflating value of the Dollar, and futures trading. But if you have to point fingers at anyone. Here you go. China. China is buying raw material like crazy.  That’s just a fact.  All these have an effect on what you are going to pay for a box of your favorite ammo.
Cheap ammo is now a thing of the past.

Because of this training classes this year will have lower round count requirements to help offset this cost.

One of the things that a lot of people just don’t understand… Guns are beautiful things. Especially in groups. 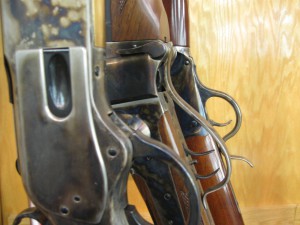 Take a guess at what these are. Gotta love the character in the old style guns… 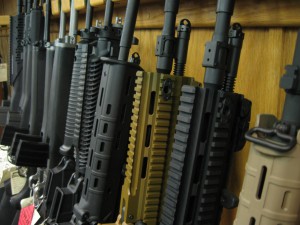 For the Tactical Minded… A line of some choice fire power. 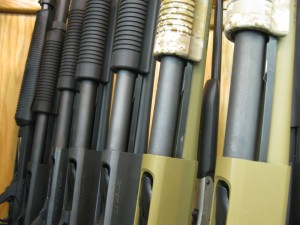 For the 12 Gauge Brotherhood, my favorite pump actions. 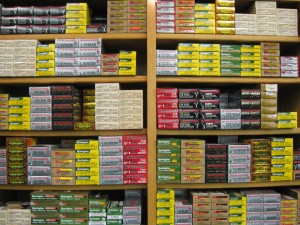