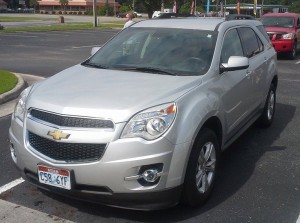 May 2013 I took delivery of a brand new Chevy Equinox.  Front wheel drive, V-6, 2LT trim level, tow package installed.   At this point it has passed 32,000 miles.
Let me give you the run down… About every 2800 miles its been getting oil changes and tire rotations done by Dealerships.  And by that I mean Marine Chevy in Jacksonville.  At 8,000 miles it needed a new battery which was replaced under warranty.  That’s been the only issue.  And really not all that big a deal. 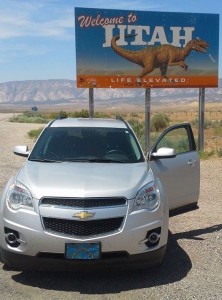 The little SUV has performed admirably.  Turning in great fuel economy… Far better than I would have expected. Better even than the 4 Cylinder versions are reporting.  Thanks to GM’s fantastic engine. Direct injection, a smarter transmission, gobs of power at the low end… The engine never really has to work hard.  Unless you ask it to.  And when you do, it delivers.  It has a lot of torque steer that you have to physically wrestle with, so hold on with both hands before you hammer it. And when you do, the car springs to life with a quickness and agility that’s unexpected. This makes my little SUV feel more like a Hot Hatch.   A very heavy, but powerful, big hot hatch.
As soon as you let off the gas again, the EQ is back to it’s normal sedate nature.  It cruises well, quietly and composed even at high interstate velocity.  Feeling solid and connected, it’s easy to gobble up miles with comfortable adjustable and heated seats.  Pretty luxurious stuff to this guy.
The touch screen is large and more responsive than most others I’ve played with.  Easy to navigate.  Syncing phones is easy as well… And the hands free calling works very well.  As does running music from the phone.  The only thing it doesn’t do is Navigation.  Which is crazy… Chevy not putting navigation in a car at this price level is just retarded. There’s also no update feature with this system.  You can update it with a USB, but there isn’t any updates for it.
Climate control is excellent with a very cold AC and a heater that you can bake a cake with.  It comes up to temp fast and cools down fast… Really once you set it to the temp you want, you can just ignore it… The system will handle the rest.
Remote Starter.  Remote hatch/rear door opening and close. Backup Camera. Alarm.  It doesn’t lack features… Save for Navigation.
The EQ is a handsome car too. I think they look good… But it could get a little more bravado in the wheels and tires department, maybe a little lift.
I think it just may be the best vehicle GM makes.  Its also the only vehicle GM hasn’t had a recall on that I’m aware of.  GM just did everything right on it… Save for the lack of Navigation.  The only problem really is the lack of personality.  Its a very Vanilla car. Its one that is easily forgotten.  It’s like the proverbial Nice Guy.  What it needs… Is a dark side.  A tattoo, a Honey Badger snear, and a pair of boots.  But even then it would probably still be too clean cut and polite about everything.

I read that GM is forcing employees to drive the Volt.  Some employees are opting to pay for their own cars in order to avoid the Volt.  GM is offering to pay for public and home charging and doing everything they can to get people into the Volt cars… and employees are not pleased about it.  The stunning thing about the report is that after all the reinbursments for charging and everything, GM is chest pounding that they will save millions of dollars.

How?  If GM is paying for everything, it’s spending an awful lot of money to get people into a car that people are not wanting to get in.

Here’s an idea for GM.  Build a car that people actually want.  I don’t want a Volt.  I would never buy one.  Ever.  Here’s a promise.  I promise that I will never in my life buy a Volt.  Or a Prius.  Wait, maybe I would if I could get one for less than a pound of Tannerite.  I do like reactive targets.  But I would never buy one to drive.  Pretty much very few people want a Volt.  GM has made a car that only Metrosexual Hipsters want, because they don’t really want a car.  They want a political statement.  I want a car.  A real car.  Not a rolling iPod dock, not an Entertainment Center, not an “experience” or a rolling billboard for the Leftist’s Agenda.    No computers.  No BS frills.  A simple car that is fun to drive.

Think about it.  People would want it… they would buy them and GM wouldn’t have to pay out anything.  Sporty engine, light weight simple car with good handling, engine up front driving the wheels in the back…  People would enjoy driving and would be texting less and paying attention to the road more because they would realize that actual driving the car is more fun than the distraction devices in the car.  The car with an efficient little spirited 4 banger would get great mileage and would still be fun to drive.  I’d buy one of them!