North Carolina is home to one of the best, most advanced 1911 Custom builders in the world, Carolina Arms Group.  You’ve read about them before here, and you might again in the future.   The owner if CAG is a fellow I call a friend… so it’s not unlikely.
I’ve watched the growth of CAG go from essentially one man with a file to a full fledged Gun Manufacturer.    And along the way, the company has evolved in a way that’s quiet remarkable.  The quality control gets tighter and tighter, and the standards get higher and higher.  The gun themselves have always been amazing.  But now I have to admit, these are the best 1911’s money can buy.  Period.  Let me show you why… END_OF_DOCUMENT_TOKEN_TO_BE_REPLACED 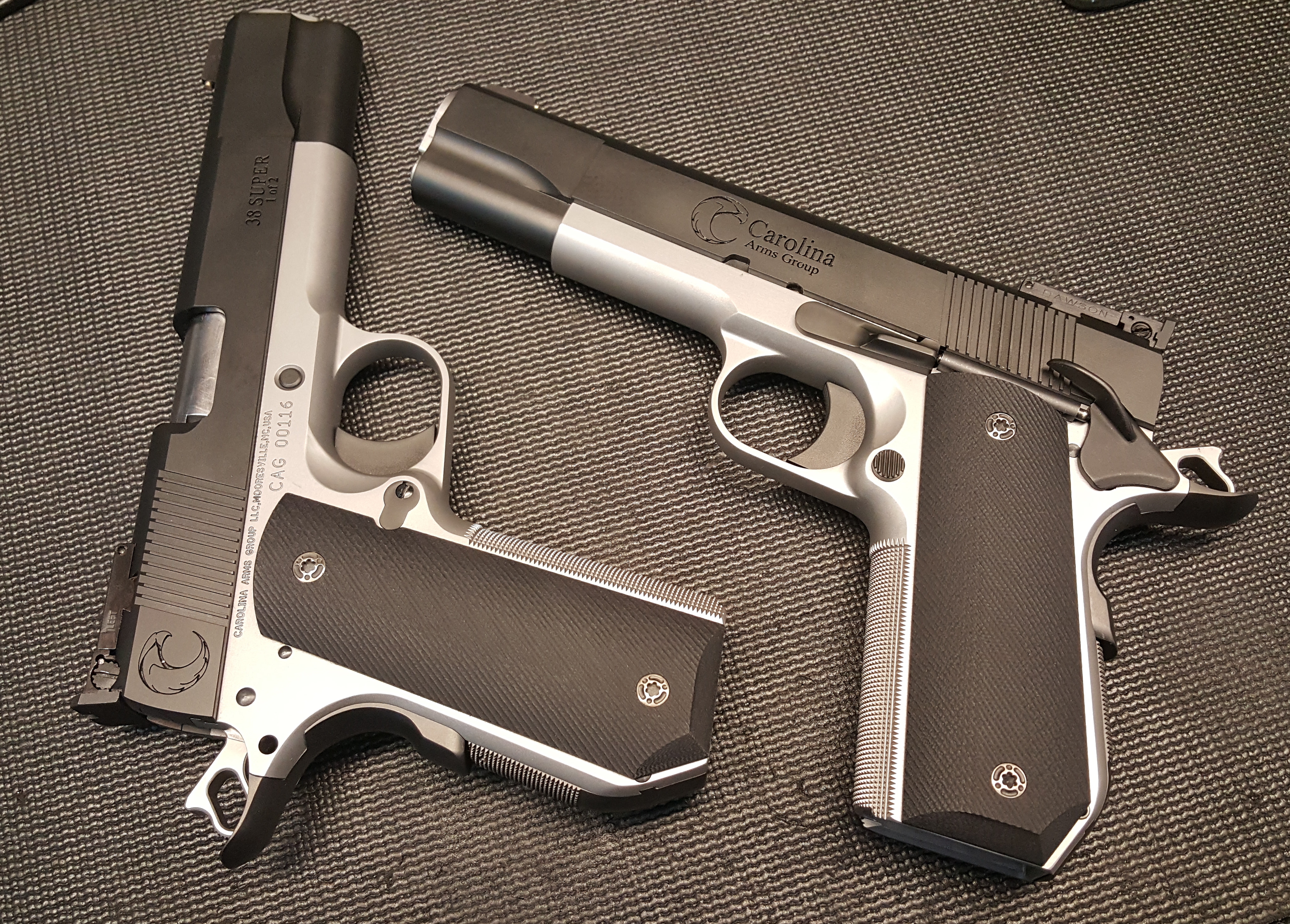 I stopped by Carolina Arms Group today to sign a copy of UPRISING USA for Jim, and while I was there, I got the chance to examine the completion of a very special 4 gun set.

These two were complete and the other two were getting final touches done.
Absolutely flawless. Now, CAG has a lot of very cool new things coming… things that I’m sworn to secrecy on, so I wont tell. Even if the NDA is a Handshake, it’s still an NDA, so I’m not saying anything other than this… Give CAG a Like, follow them on FB. Because you are going to want to keep your eye on them.
There is one new thing about to drop that I CAN talk about.
CAG is going to be releasing Fire Control Parts that you can order to be put into your gun. I’ve examined these… FANTASTIC. You are going to want to put these on your gun. Machined from forged billet stainless and absolutely the top quality you would expect from CAG. Also slides and pretty much everything you need to build your 1911 save for the Frames. And since not all of us are Gunsmiths – you will be able to send in your 1911 and CAG’s own Gunsmiths will give you their FEEL THE DIFFERENCE treatment.  All of the services will of course be on a menu for pricing and such. So bookmark this page too:
http://carolinaarmsgroup.com/

Carolina Arms Group is located not very far away from me at all.  About 45 minutes up I-77 and I’m pulling into their parking lot.  So I’ve come to know the owner and I’ve met most everyone working at CAG.    CAG has made some very nice 1911’s… and some of the the best 1911’s I’ve ever handled.  That was the Trenton Series, a family of 1911’s named after the Battle of Trenton.      But now CAG has a new series of pistols.  Meet the PRIVATEER. 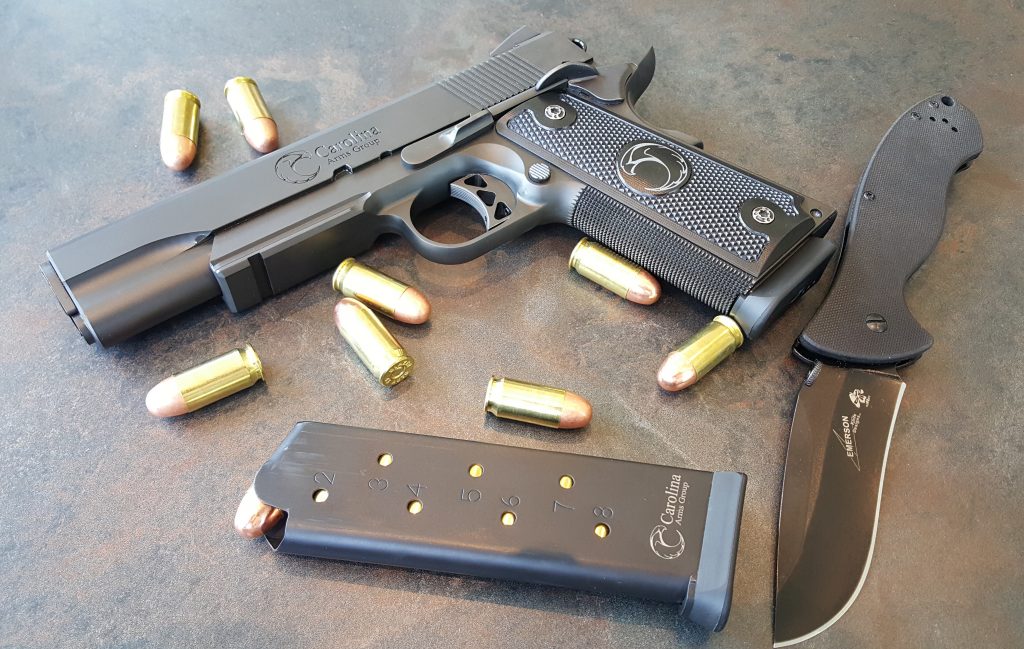 I’m going to say this… and I don’t say this lightly.  In fact, I’ve considered this for some time and I keep coming back to the same conclusion.  This is the best 1911 I’ve ever seen.  Let me say this again…
THIS IS THE BEST 1911 I HAVE EVER SEEN. 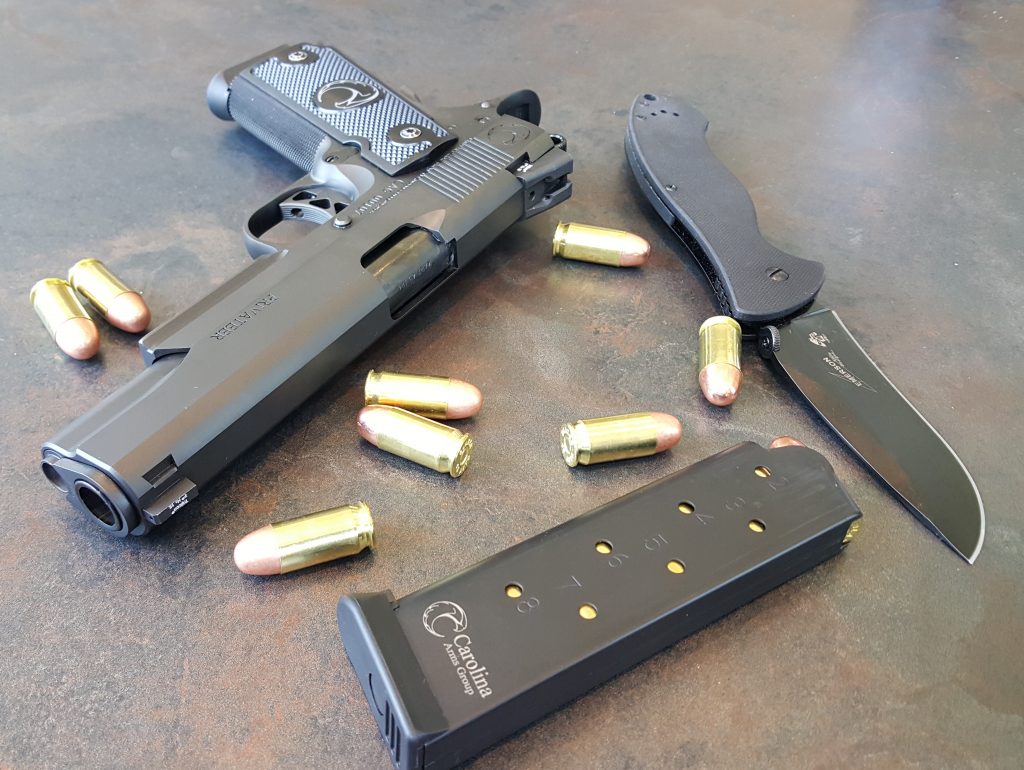 I’ve been into 1911’s since I was 16 and the father of a girlfriend introduced me to them.  His name was Dave and he was awesome.  I don’t even remember his daughter anymore… but I remember Dave.  Dave taught me the Tao of Browning.   He taught me how the gun works, inside and out, and how to shoot it.

Dave literally saved my life because of this… because the Army gave me Zero training when they issued me a 1911 and it was a 1911 that I used to save my life when someone was intent on ending it.   I’ve always loved the 1911 since those rather exciting days.  And I’ve always taken them seriously because of it.

I’ve tested and reviewed some of the best 1911’s on the planet, and have owned 1911’s from the likes of Terry Tussy and other high end custom gunsmiths…  And let me tell you… The CAG PRIVATEER 1911 is the finest example of the 1911 Pistol.   Period.  Saint John Moses Browning himself smiles upon the CAG Privateer and is well pleased. 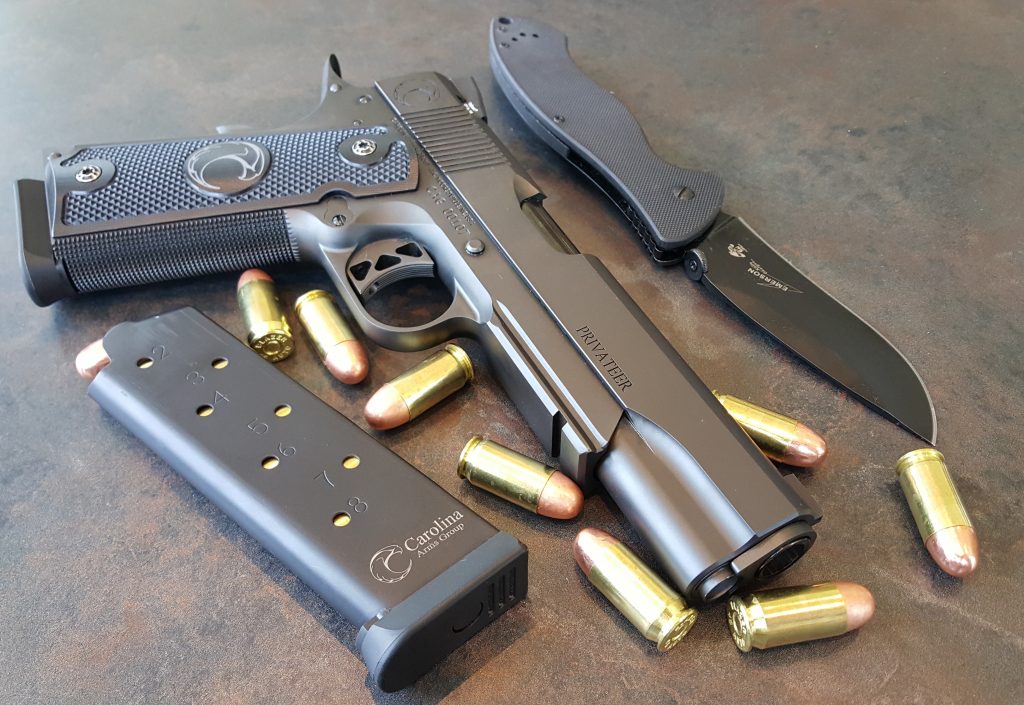 Differences from the Trenton series have the Privateer using a regular, fine, checkering on the frame and the inclusion of an accessory rail.  Up top it’s wearing Tritium Night Sights instead of fiber optics.  As all serious use handguns should.  The grips are a slim profile, which makes the gun more narrower in the hand, which is great when wearing gloves… and even better when the gun is tight against your side when it’s riding in a holster.

One day, I’m going to own a CAG Privateer in a Commander length.

I paid a visit to Carolina Arms Group today… The makers of very desirable things. I got a peek at a new model, the Veteran Carry… which is an insanely smooth Bobtail Commander. It’s fantastic. Save your Pennies. And they are going to be rolling out some knives with carbon fiber scales, and matching carbon fiber grips for the pistol. VERY nice. Impressive. Mark threw some laser engraving on my knife… Thanks, Mark! If you guys need anything lasered – contact CAG and talk to them about it. Their laser system is fast and precise… sharpest looking laser work out there.
The new Veteran Carry – that’s the one to get!
‪#‎feelthedifference‬. 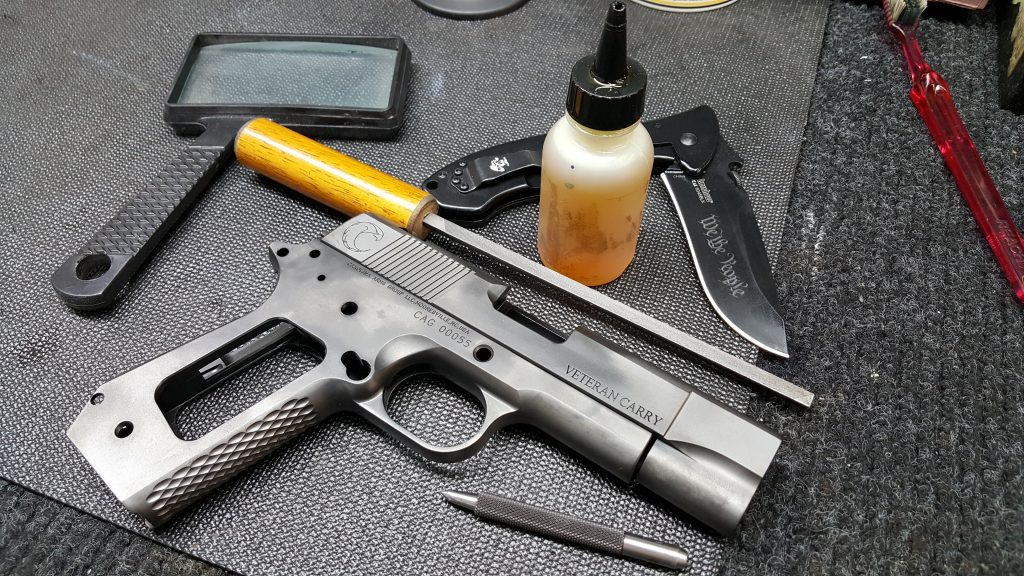 Sneak Peek at the new Veteran Carry pistol.  It’s not even finished and it’s gorgeous as hell.  The Want is strong with this one. 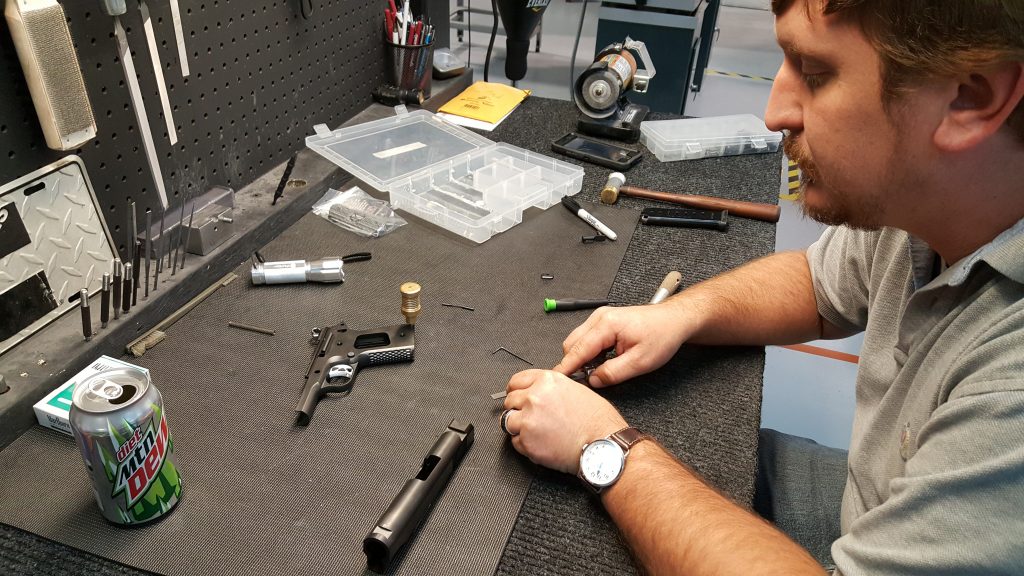 Taking the time to fit it right.  By hand. 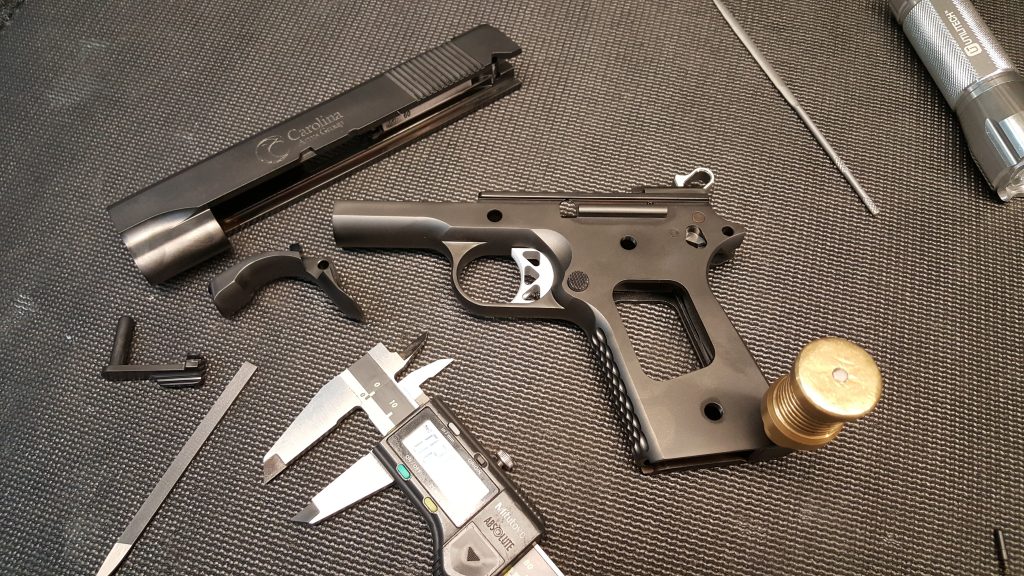 The little details are the important ones.   It has to be perfect. 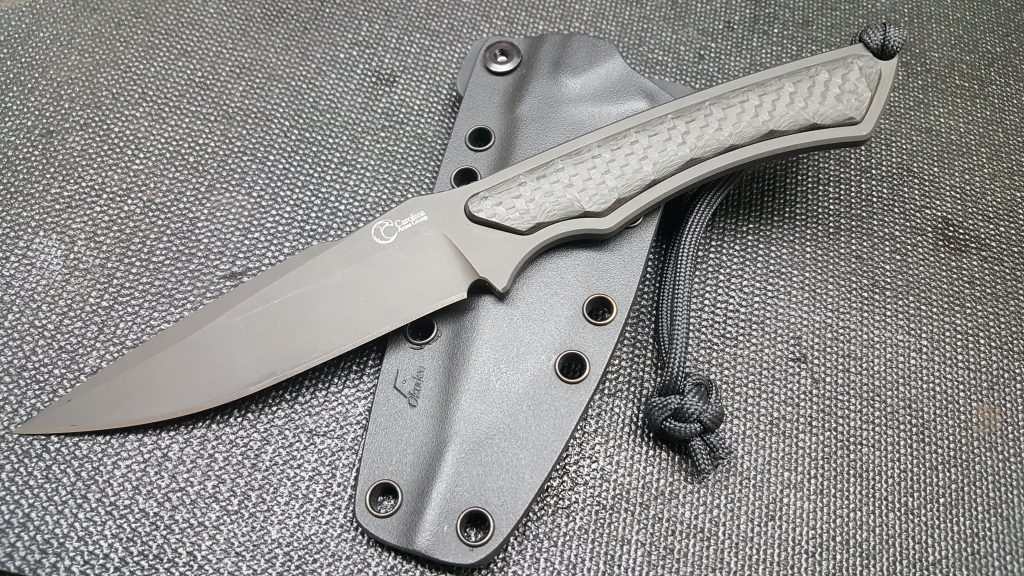 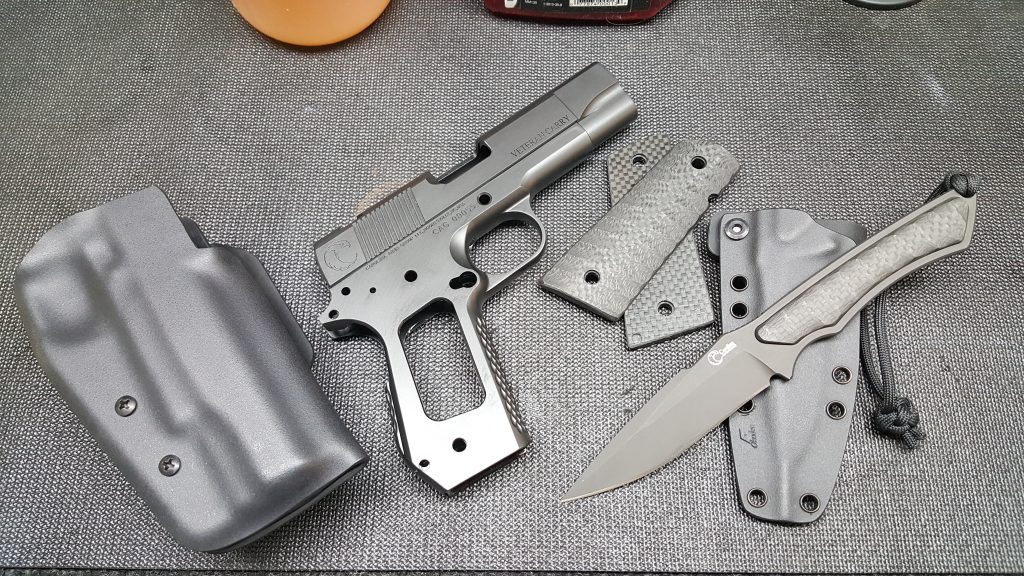 You’ll be able to order a Carolina Arms Group accessory kit with your pistol… Which includes the holster, knife, and matching grips. 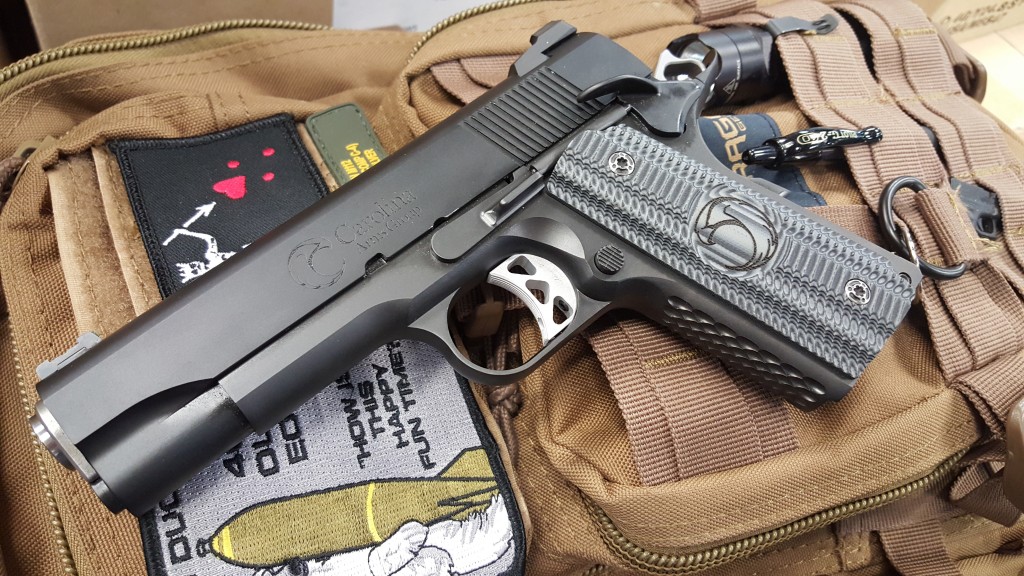 The new 1911 Maker in North Carolina is Carolina Arms Group.    These guns are legit.  I’d put them right up there with Les Baer and Ed Brown. 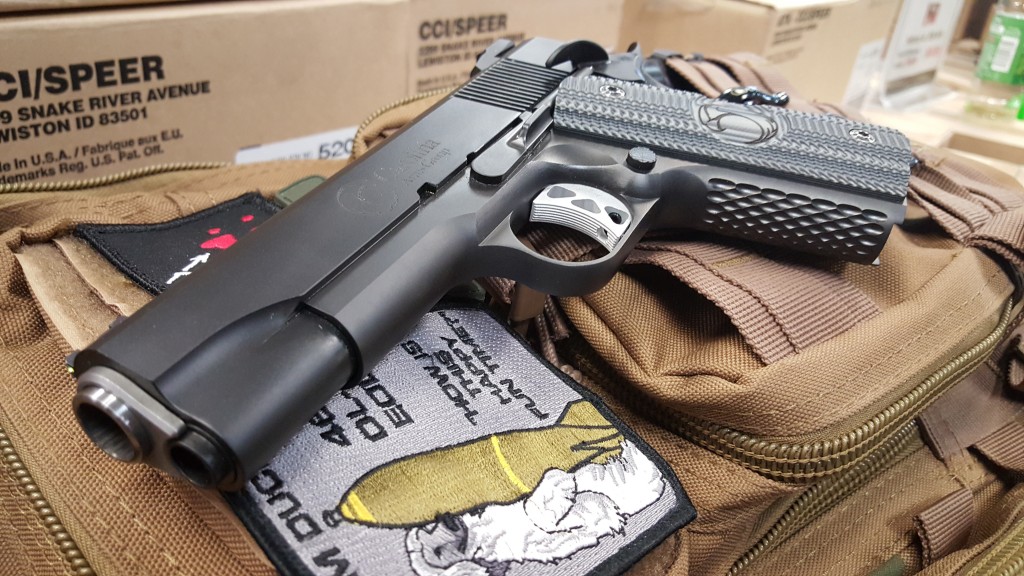 The actions, triggers, overall fitment – flawless.  Very smooth.  Great triggers… These are everything you want in a 1911. 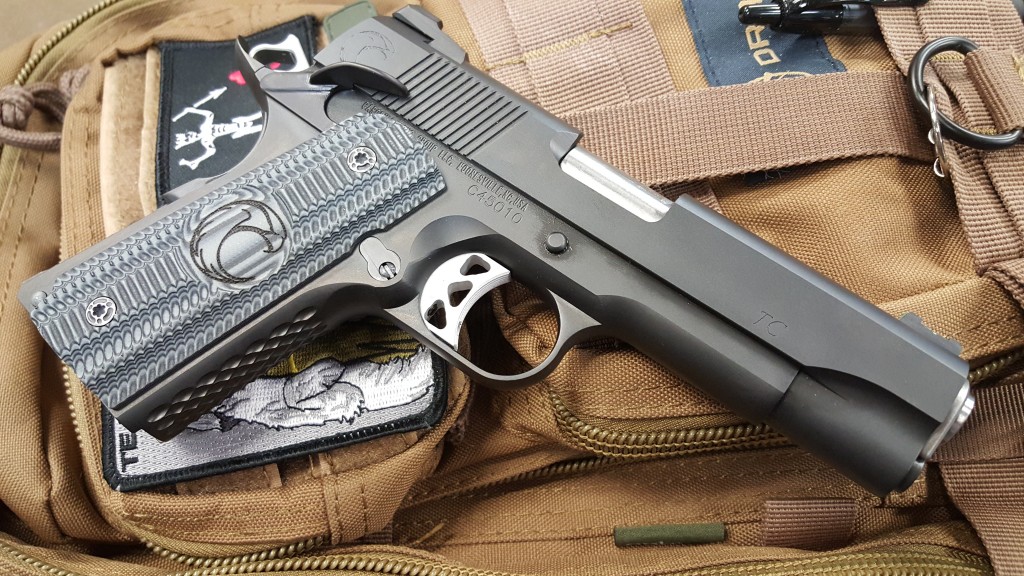 Now, CAG is a new company so they don’t have that name and reputation.   But if you know 1911’s and how they should be built – and not just Name Dropping and Marketing Buzzwords… and you examine a CAG 1911… You’ll know these are exquisite 1911’s. 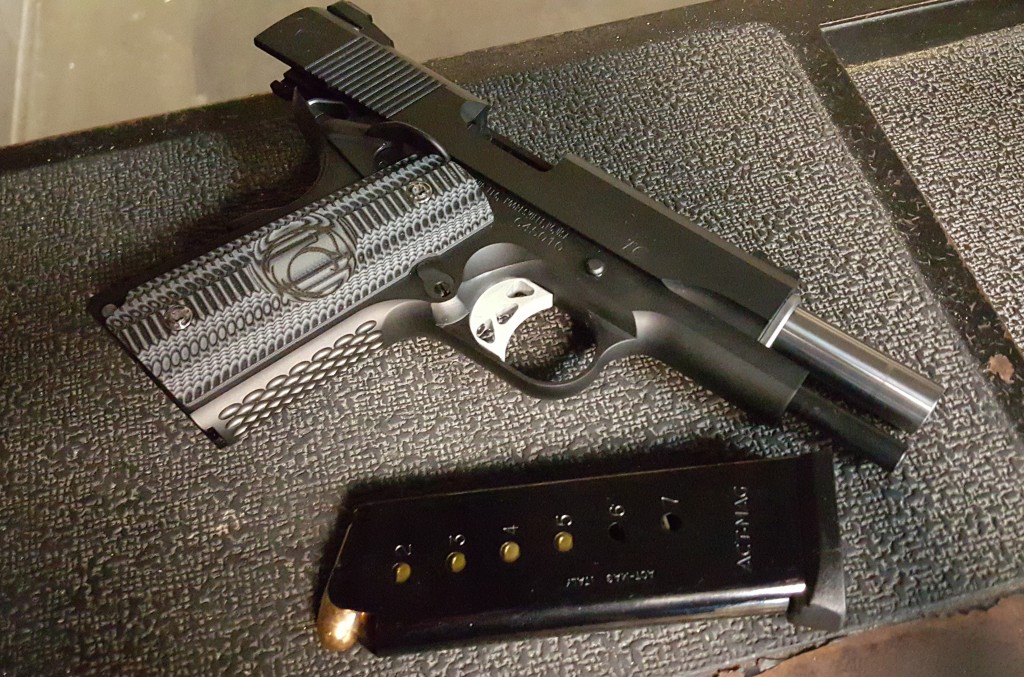 I took the opportunity to test fire their new Commander Length pistol.   It was flawless.   Cycled perfectly, and it didn’t just shoot point of aim – point of impact…. It was like it shot to “Point of Will”.  It was telekinetic… Exactly like a fine 1911 should be.   I wanted to put a round “THERE” and the round went there.  You are not just hitting your target… you are placing your shots on the target where you want them to go.

These guns are built with all premium level parts… Everything is forged billet.  Nothing even remotely MIM or Cast like how some high level 1911 makers are sneaking into their production… These are true custom built 1911’s.
The Price does reflect that… Around 3 Large.  But you really do get what you pay for here.   These guns are right up there with the very best.