At my core, I’m a 1911 Guy.  Though I have a great fondness for SIG, CZ, and Beretta DA/SA type pistols, and a love of Revolvers… my heart belongs to the 1911.    I get asked about them from time to time, though not as often as I used to.  Because everyone’s talking about polymer framed, striker fired pistols these days.  People are generally forgetting about the amazingly wonderful 1911.  When asked, I’m most often asked about what my top choices are in a 1911.  And usually, I’m asked about this after the person buys their 1911 pistol and then gets their Feels bruised because their pistol isn’t on my list.
Now, as far as lists go, I’m not going to a top 5 Brands.  Because that’s not just boring, but obvious.  So I’m going to pick the Top 5 Pistols.  The individual model version… This is a much more challenging list.  Made far more difficult by limiting it to only 5 pistols when this list could easily – very easily – go to a Top 20.  So if you’re baby isn’t in the top 5, it’s probably really close… so your knee-jerk reaction of “What about this?” is going to be answered with, “There Can Be Only Five.”
Also, this list is just for Production pistols… Wilson Combat, Nighthawk Custom, Carolina Arms Group, Ed Brown, Les Baer and the like, I classify as “Custom” 1911’s.
Anyways, without any more preamble, here’s my Top 5 Production 1911 Pistols: 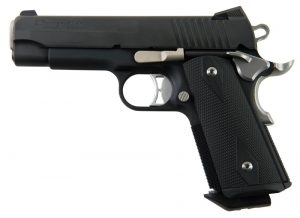 This is a great 1911 for every day carry and is a sister pistol the SIG C3.    I had the C3 for some time, and it was fantastic after about a 200 round break-in period.  The C3 is a little fancier, with a rosewood grips and a two-tone finish… Lovely gun.  But the RCS is more Purpose Built.  It’s not cosmetically enhanced, it’s not dressed up.  It’s basic black, and the edges have been slightly “melted” to make it more comfortable in it’s Concealed Carry role. 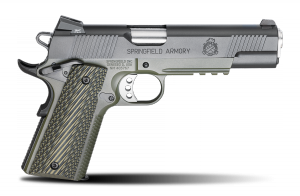 Well, actually the MC Operator is no longer a model you can get, by that name.  But you can essentially get the same thing in the new “Loaded Model”.   This is a cost effective 1911 that’s got all the upgrade features.  Night sights, Ambi Safety, Frame Rail… Making this a rather serious Fighting 1911.  The Marine MARSOC guys used to carry these before Colt won the contract.  I had visited a MARSOC Armory, and there were still several of these pistols in inventory.  They never did like the Colt pistols that replaced these… though, they’ve gone Glock 19 since.  Anyways, these are great guns if you want an affordable SHTF type 1911. 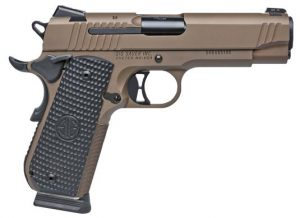 This one is the most different pistol on this list… Because unlike all the others on this list that are .45’s… I’m picking this one in .357 SIG.  And here’s why… Penetration and Accuracy.  This round is the Baby Doll for our US Air Marshalls, the one LE Agency that takes handgunning more seriously than anyone else.  It’s a phenomenal round.  And it’s chambered in a fantastic pistol.  Distinctive looks, combined with such exceptionally good ballistics… makes this the next 1911 I buy. 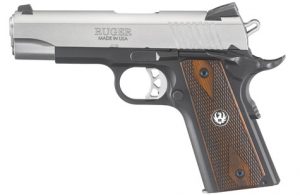 This one really did take me by surprise.  The gun you get for what you pay for it… Amazing.  This is what defines Bang for the Buck for me.  See, I’m all about Commander 1911’s.  4.25″ length barrel just looks better to me, and balances better in my hands than the 5″ Government length.  For an Every Day Carry gun, I like the Light Weight frames.  Combine the two, and you get the Light Weight Commander.  The only thing that could make this better, would be if it was Bob-Tailed.  But this pistol retails for only 800 bucks.  And it’s been 100% reliable so far with all loads fired.   I am so impressed with this pistol that… Well… I’m wearing it at this moment. 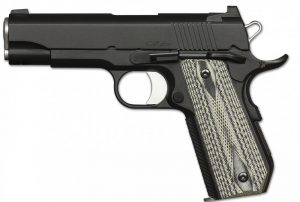 Dan Wesson really has the hands down best production 1911’s on the market in all metrics.  And my absolute favorite, is the V-Bob.  Which is a Bobtailed Commander version of the Valor Series 1911.  Generally, you can get them for about 1200 bucks.  Which when you handle them, makes you wonder at how they can do this for only 12 Large.  This is getting up there with most custom made 1911’s.  I adore the bob-tail conversion, and the hooked rear sight.  This is my ultimate 1911 pistol.