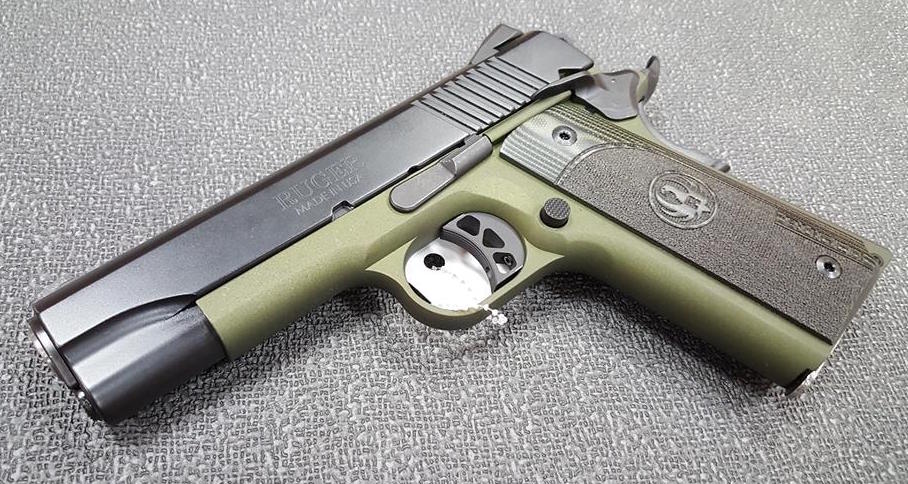 I stopped into a joint called “Nichole’s Store” in Rockhill, SC and found this little guy sitting there, all alone in a display full of other Ruger 1911’s.  This little one was all alone, because he’s a Davidson’s Exclusive.  Ruger is the Master of Distributor Exclusives.  I didn’t even know this guy existed. 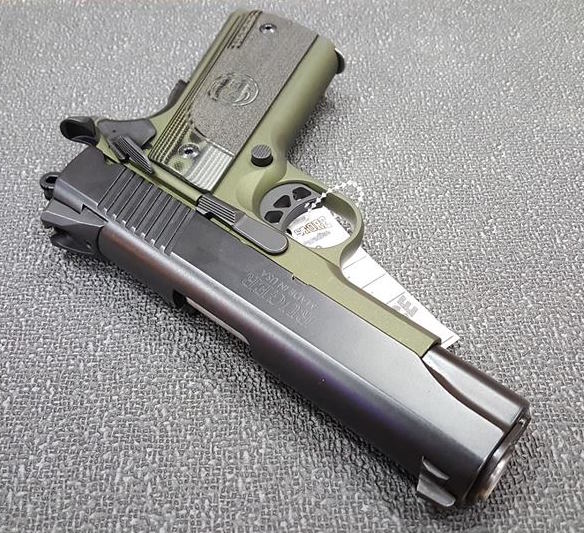 This finish on the slide looks blued, not coated.  If it is coated – I don’t know what it is.  But it has some color tinge to it, it’s not just black.  Depending on how the light hits it, it can look purplish, bluish, or brown – ish.   It’s pretty unique and the photo does kinda capture it, but then it really doesn’t.  It looks very nice in person. 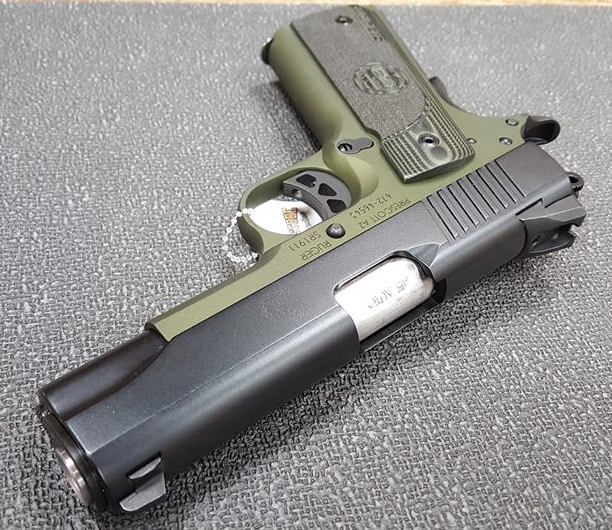 Like all Ruger 1911’s, the gun feels pretty solid and well made – and smooth.  But without feeling tight like a custom.   You can tell this is a Working Class Production Gun.  With tolerances generous enough for Reliability over Bank Vault Pleasures.  One one is going to mistake this for a Nighthawk or a CAG… But no one is going to mistake it for a Rock Island or ATI either.

It has two warts.  One you can see… the Novak Rear Sight.  Which is The Devil on a gun for this purpose.  The purpose being, this is a Defensive Gun.   Which means it’s a Fighting Gun.  And Novak Sights should not be on any Fighting Gun.  Ever.   The sights need to be replaced anyway, as they are just white 3 Dot sights… and any defensive pistol NEEDS Tritium.  That’s not a point I’ll argue about.  That’s God’s Own Truth.  This is why He created Tritium.  So it can be used on His Saint, John Moses Browning’s handguns.  While I’d be getting Tritium sights – I’d just make sure the Rear wasn’t Novak, and that it was a Straight 8 instead of 3 Dot.

The other wart is the Manual Safety… it flicks on with a nice snap.  The way it should.  But it flicks off, with no click, no snap, no tactile sign, and no audible tell.  It just… slides off.  Way too easily.  Like it was loose or broken.   That is a huge turn off to me.  Going Off Safe should be Tactile and Deliberate.  This feels like it could slide off if you had it in the holster and jumped up and down more than once.  This is of course, an easy fix.  But it’s a fix that would have to be made before you loaded it.