The Bike of the Week this time around is the Kawasaki ZX10R.  Another one from The Big Green.  Unlike my ZX11, which is aimed for “Sport Touring”, the ZX10R is pure sport.  The differences are in Rider Position, Engine Tuning, and Suspension geometry and settings.  It’s a completely different animal.  Like a Ford Escort is almost completely unrelated to the Mustang GT.  This bike is all about Aggression.  Speed and handling.  This thing is a monster. 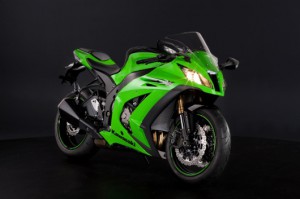 We have a small group that watches a couple motorcycle races every few weeks.  Primarily we really only pay attention to the Liter Class Wars.  We’ve noticed a distinct trend.  The first handful of laps are always led by the Kawasaki ZX10R.  After about the 5th lap or so, the Ninja starts to drop back a few positions… and usually ends up coming in 7th place or something.  However, the last time the Ninja stayed up front  all the way to the Almost End. 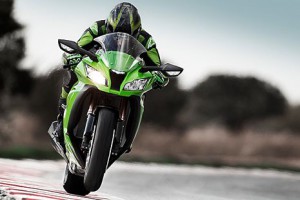 I say “Almost End” because in the last lap, that damned Messerschmidt Pilot tucked in to the Ninja’s 6 O’Clock and in the last few corners… gunned him down in Cold Blood… Passed him and took the race.  It was something the BMW Pilots have been doing to Honda, Aprilia, freaking everyone.  What’s different this time though is that the Ninja was finally leading, and he did so by a good long margin.  It really came down to not the bike, but Tire Selection.  Looks like they finally found the right one.  Now if someone could just sabotage the BMW’s, they might win!

Outside of Racing, the ZX10R remains a fantastic street bike.  According to Motorcyclist Magazine, if you want the Best Liter Bike you can buy – that’s not the BMW – then it’s the Ninja.  It’s got more than a huge following… It’s one of the best selling Liter Bikes out there.  This bike doesn’t have any new huge advances in technology, just an evolution of everything Kawasaki has been doing right since the move Top Gun.

Oh, and yes, Maverick is a fucking Squid.