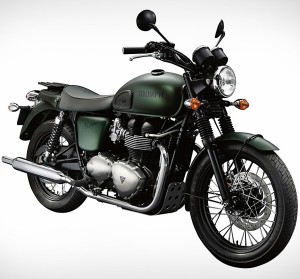 I love sport bikes, and Cafe Racers… but there is something about the Retro bikes that are just epic cool without even trying.  Now, The Bonneville isn’t really Retro… because it’s never really changed it’s what it is.  Coolness, now Personified by the Crowned King of Cool, Steve McQueen. 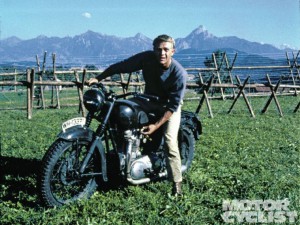 Steve McQueen was no spoiled Hollywood Brat Pack wuss.  He was the real deal and he didn’t play any characters that did things he didn’t do every day in real life.  He insisted on doing that epic motorcycle jump in The Great Escape, one of the best movies of all time.  That’s right, watch that film and know Steve wanted to do that jump himself.  He rode Motorcycles like a complete Nutter, then when he was done with that, he raced cars, satisfied women with a glance and a grin, and just wrote the book on Coolness.  I have a signed copy… if your not cool enough, you can’t be given a copy of your own.  You don’t ask for it. It just shows up one day… the day you are deemed worthy.  The book only has one page inside the thick leather and oil stained cover.  It’s a picture of Steve, sitting on that Triumph.

The Bonneville is no hotrod.  It’s stats are rather moderate by modern standards.  But that’s no bother.

If you disagree about the Steve McQueen Bonneville – here’s a list of all the reasons your argument is invalid: