Here’s a folding knife that I really like, from a company that I really like.  The 722 Spitfire from Buck.  To me, Buck is much like what Ruger was to me… a Company that I just ignored and for the most part, just didn’t care for all that much, with only a few individual exceptions on specific products.   But now, Ruger is smashing Home Runs with most every swing and I just love watching them get better and better.  Buck is the same way.  I am a fan of the 110 series, as I’ve said before… and a fan of their Vantage knives… And now they have this.  The Spitfire.  Que up the Knife Snobbery… they are going to hate this one… But I like it. 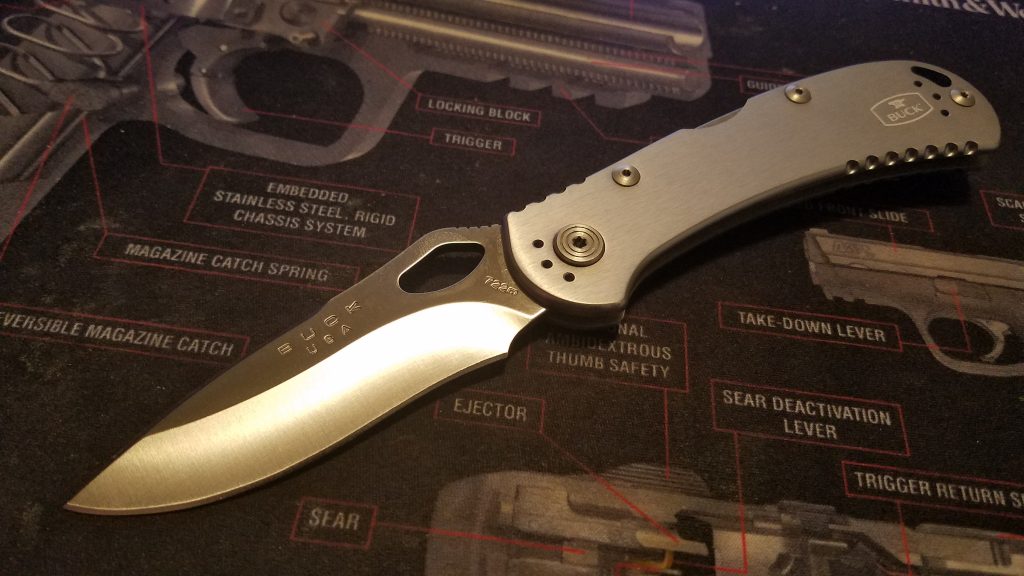 The Spitfire comes with some color options, but I like the all natural clear anodized look on this one.  It’s a Lock Back, using Buck’s classic lock mechanism that we’re all familiar with.  An oddly shaped thumb hole, that looks odd, but works well enough for it’s purpose. 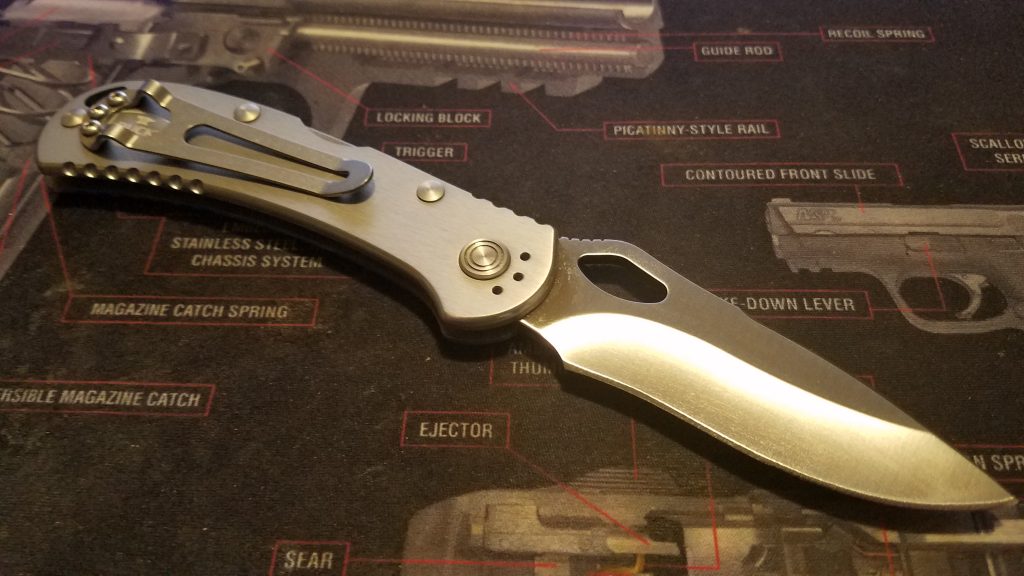 The star of the show is, of course, the Blade.  The blade is 3.25″ long with a nice drop point and an attractive recurve profile with just enough belly to make it workable.  It’s hollow ground, but not quite as sharp as I think it should be out of the box.  Touching that up though, is not too hard, but it’s something you are going to want to take a little time doing.  The steel is nothing fancy, but it’s a good solid choice for the Price Point.  This is 420HC with Buck’s BOSS Heat & Cryo treatment process that was developed by Paul Boss.
What I’m about to say next might light some folks’ hair on fire… but I think 420HC with the Boss treatment is easily on par with blade steels like S30V.  So in my opinion, you are getting near Premium blade quality, at Blister Pack pricing.  I’ve seen these knives going from 30 to 65 dollars, with the median pricing being about 40 bucks. 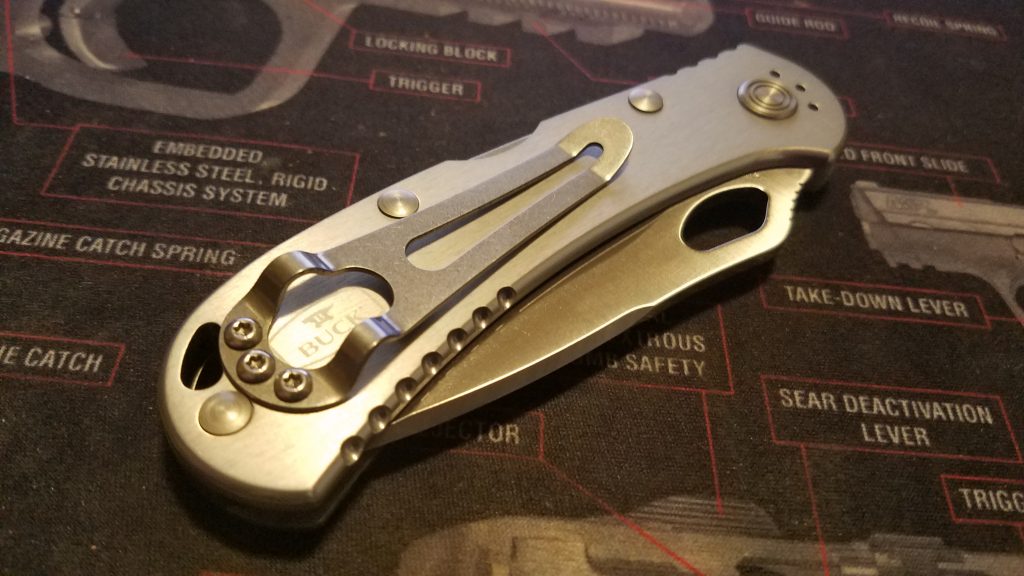 The Pocket Clip is quiet deep, so the knife is going to ride very low, which is becoming the popular trend… Guys are wanting as little knife as possible above the pocket.  The clip is also moveable to any of the four corners on the knife you wish to put it, allowing for Tip Up, Tip Down, Left, or Right carry.  However you want it.  Out of the box though, it’s Right Handed, Tip Up carry. 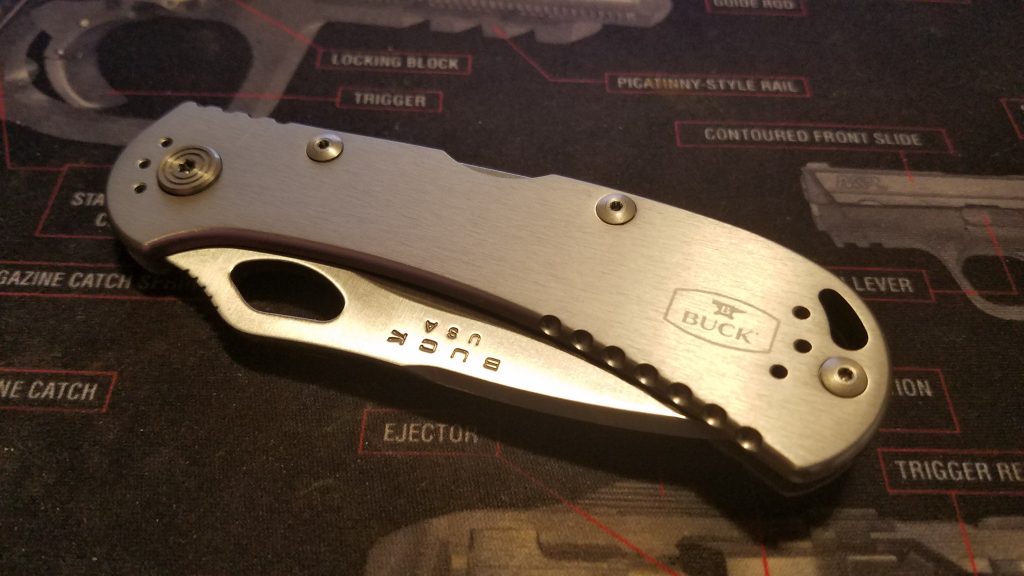 Overall though, what I find the most attractive thing about this knife, is the Size vs Weight efficiency.   It weighs only 3.2 ounces, which puts it right in the EDC category for most anyone.  It’s very slim and very smooth.  And the Blade to Handle ratio is pretty dang good.   The aluminum handles don’t have to be thick to be strong.  Being so slim, it carries well in the pocket.  And pulling it back out is easy thanks to the slick sides.  Now, that slickness might be a problem for Handling, but the gimping that Buck put on the handle, at just the right points, really lets you get a good grip on it.
The other thing I really like about this knife is that it’s 40 Bucks for an all USA Made knife… So you’re Blade is Made in America, by Americans, for Americans… and you don’t have to pay a premium for the Patriotism.  Then there’s Buck’s Forever Warranty.  Which basically means, exactly what it sounds like… They are going to back up their blades forever unless you use it stupidly and break it, or you lose it.  All in all, it’s one of the best blades you can get for the asking price.