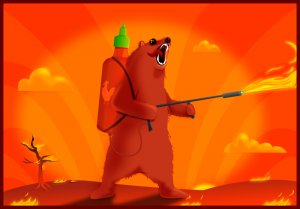 People are discovering Sriracha.  A spicy, flavorful hot sauce from Asia… Originally only found at Chinese Buffets and the like.  But it’s broken out of the stereotypes and now it stands on its own.  I’ve heard it called “Thai Ketchup”… which is a fairly accurate term.  As anything you might put ketchup on – you can put Sriracha on and it will be better.  This started a new Spice Trade… The factory in Asia couldn’t keep up with demand so they built one in the US as the tasty sauce has really taken off.

Here’s the problem though.   The US factory that makes Sriracha has been declared a public nuisance because of the smell.  At the same time it’s becoming more and more popular.  People are hording.  In some places, it’s hard to find.  In fact, I couldn’t.  We had run out and the local stores didn’t have any.  One thing we really like at The Ogre House – is Hot Sauce.  We use it all the time.  The more different varieties, the better.  And one of the House Favorites is Sriracha.  And we couldn’t find any.  This was a problem.   But I did find an alternative.
Because of the threat of the US Sriracha factory being shut down, Texas Pete stepped up and made their own version of it.   Texas Pete is a North Carolina tradition… so I had to buy a bottle to try out. 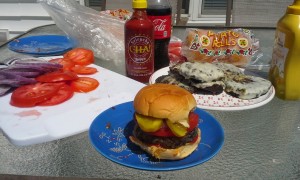 Oh, it’s good.  It’s very good.  If you can’t find the original.  Which I couldn’t.    In fact, I like it.  It does very well on Burgers and Dogs and Steaks and noodles and Pizza… Everything I tried it on.  The above image was posted on FaceBook as I was showing off my Lunch – because that’s what Facebook is for.  To make sure all your friends know what you are eating.
Then yesterday a mystery box appeared on our door step. 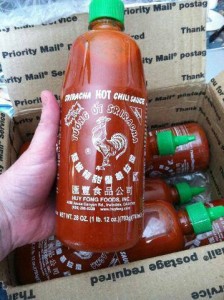 The box contained 6 big bottles.  The real deal.  There was no note.  No return address save for the Factory.  My wife declared it a “year’s supply”.  I give it a month.  A tasty tasty month. 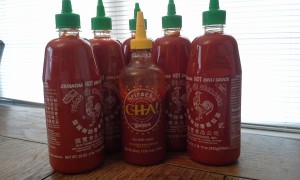 So the question here is how does Texas Pete’s version stand up to the original?  (The 6th bottle of the original goodness could not be pried from my oldest son’s hands.  Even just to take a photo.)

It looks almost identical in the photo.  But it’s not.  The vehicle for this test was a simple scrambled egg.   Half the egg was covered in the “Rooster Sauce” and the other in the “Cha”.

The Flaming Cock wins.  Hands down.  The flavor is richer, fuller… while the Texas Pete seems to have a little more watered down taste… more Vinegar.  In the original, you can really taste the peppers. The Texas Pete just doesn’t stand up.  It’s not quite as hot either, so maybe it’s good for Beginners and it’s just fine if you can’t find The Good Stuff.  It’s not really a HOT SAUCE per say.  Because it’s not really “HOT”.  It’s warmer than Ketchup.  Maybe on a scale of 1 to 10 with 10 being “Insanity Sauce” (Just throwing that out there), then Sriracha is about a 3.  But it’s not about the Heat.  It’s about the Flavor.  It tastes GOOD. 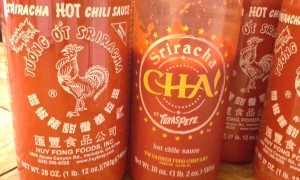 Here’s the thing – they both have their place.  If you are preparing something that asks you to mix the Sriracha in something or put it in your cooking… You can use the Texas Pete.  It will be fine for that.  Save the original Sriracha for pure topical applications where your sauce isn’t diluted.  And you can put it on just about everything.  And it makes everything better.

Why Sriracha?  This explains Sriracha quite clearly.

Seriously, guys… But it on your Burgers and Pizza.  Use it generously.  On a burger – use it like you would ketchup.  On a pizza, drizzle it all over it, or dip it.  It really adds tone and flavor.   If you don’t try it – You Are Wrong.