This is the scariest game I’ve ever played.  More than Doom 3, the Marine missions in AVP, or FEAR… which are all my top choices of a scary gaming goodness… But Undying holds the crown.  The graphics suck and the combat dynamics are “interesting”… the story is pretty good for a Video Game’s rationalization to go around and kill everything.  What sets it apart is the Characters and the Environment.  The lighting effects, the sound effects, and the music combine to create an immersive environment that few games can even get close to.  While I consider myself to be very jaded and disconnected, Undying really sucked me in to that world.  And that world scared me.  There was one area in the game that was pretty much empty of monsters, but the mood and the music worked together to really creep me the heck out.  Undying is the only Horror-FPS game, or any Horror Game, that made me throw a NOPE grenade, unplug the computer, and walk away.  UNDYING did that to me.  It’s never happened before or since… but I had to pull the power cord, get up, and walk away, because I was freaked the hell out.

You know how you have your 1 horror movie that freaked you out the most when you first saw it?  For me that’s EVENT HORIZON.  Well, Undying is that – in a video game. 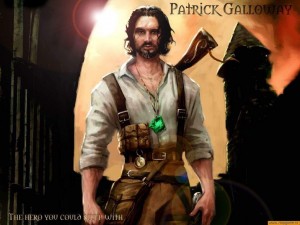 This is the character you play.  Patrick Galloway.  He’s a Post WW1 Era Scottish version of Neo/Mr. Anderson or a Dr. Gordon Freeman.  He can use bottles of flaming liquid, a revolver, a shotgun or a slingshot from that guy on Youtube that makes crazy slingshots.  And in the other hand, he can use Magic.  And he’s left handed.  Clive Barker said that he wanted to make this character sexy, as he is gay and wanted a character that held his attention.  The result is that unlike other FPS Game characters you get to know Patrick Galloway… your alter-ego as play through and get sucked into the Undying world.

Being written by Clive Barker, it’s going to have some depth, some darkness, and a enough Batshit to build Crazy Town with.    Clive… is a guy that’s really not right in the head.  He makes Stephen King look like a school teacher, and Dean Koontz look like a sunday school teacher.  So some aspects of what he writes is just oh so very wrong.  There’s a lot of Wrongness in this game.  Here’s the thing though… It works.  And it’s scary.  And it’s a hard game, which means you are not going to be breezing through it.  You have to investigate things, and figure things out, and it’s not going to be easy.

I’d like to see this game redone on a better game engine with better graphics.  And I’d like to see the ending cleaned up and some other things tweaked… but overall it really stands on it’s own.  Maybe though… maybe it’s best that the Graphics remain poor.  Because maybe it would be too much if it was any more “realistic”.