Last Saturday Headshot Willy brought out one of the new SIG P938 pistols.  I’ve posted about it before… how cool I thought they were.

Well, at the Range, I was finally able to try my hand with it.  The gun shoots as good as it looks.  It was accurate and the recoil was plenty mild enough in 9mm.  Very controllable.

My target was a small melon sized rock on a berm.  6 out of 6 hits.  Plenty good enough for defensive use, and to convince me that one of these days I’ll have to own one of these pistols now.

You guys know I’ve drank the Glock Cool-aide.  I freely admit it.  But I also remain an unabashed fan of the handguns from SIG SAUER.  I just like them.  Especially when SIG is coming out with very good ideas like the new P938. 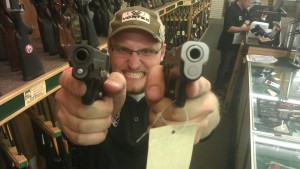 Not much bigger than the P238, the little .380 automatic… the new P938 is essentially the same thing just scaled up slightly to fire the 9mm cartridge.

One of the guns that I’ve always wanted was a Colt Pocket 9.  Colt gave the American Public the middle finger and my desire to pursue the Pocket 9 was squelched, but not totally killed in action.  This kind of reminds me of that little Colt. 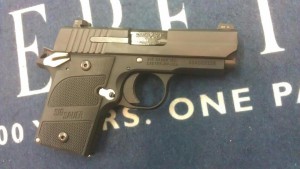 Really the only guns in the SIG’s class are the Kimber Solo, the Springfield EMP and SIG’s own P290.  I’m not talking about the Kahr’s or the Walther or even the Shield… I’m talking about the Higher Class options here.  The 938 just feels like it’s a step above to me.  I think it’s a lot nicer than an EMP… again, that’s just me and I am not going to cut down on the EMP.  I know it’s a great little pistol.  I just like the 938 a lot more for reasons I can’t quantify for you.  Same reason I like “Pralines and Cream” better than “Butter Pecan”.  I can’t explain why… I love me some Butter Pecan.  It’s one of my very favorites, but given the option between the two, I’ll take the Pralines and Cream every time.  I don’t even know what the hell a Praline is. 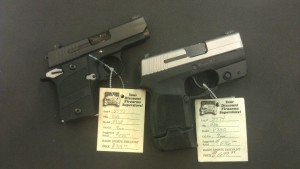 Back to the SIG, the new 938 trumps the 290 hard.  Lower bore axis, slimmer profile… just nicer.  I know I tend to favor Single Action triggers or triggers that feel and work like Single Actions, so admittedly I am biased to the 938 over the 290.  But taking the trigger out of the equation, the 938 is dimensionally smaller, which gives it an edge in concealment without sacrificing any ability for the gun to be a good shooter.  So really the choice is between the 938 and the Solo. 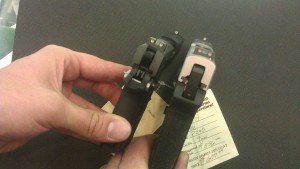 The P290 just seems too chunky by comparison to the slender newcomer.

At the gun shop I work at, we are a house divided on the new SIG… Some of us prefer the SIG P938.  And by Some I mean just me.  Everyone else like the Solo better. Oh well.  The SOLO is very smooth and sleek.  But it’s too much of a good thing and I don’t feel like I can get a solid hold on it.  It doesn’t point for me either.  The 938 points very well for being so small, and I can get a good grip on it, even with my hamfists. 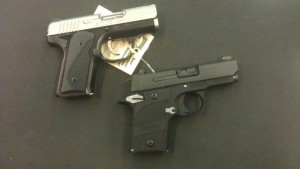 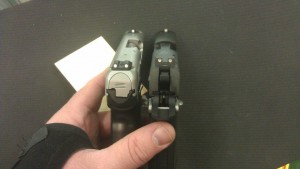 To me it comes down to that trigger pull.  The SIG’s trigger is a Single Action that kept getting better the more we played with it, with the SOLO is a Double Action Only affair… While the SOLO’s trigger is nice, I find the SIG’s to be superior.  Some will argue that accuracy with a Defensive Weapon such as these is a secondary concern… and they are right.  But this doesn’t mean we have to disregard accuracy altogether.  I am quite sure that in a defensive pistol accuracy remains quite important.  Making that First Round Hit through a Vital is important.  But, that’s just my opinion.

UPDATE:  Thanks for the Hat Tip, SIG.  *High Five*