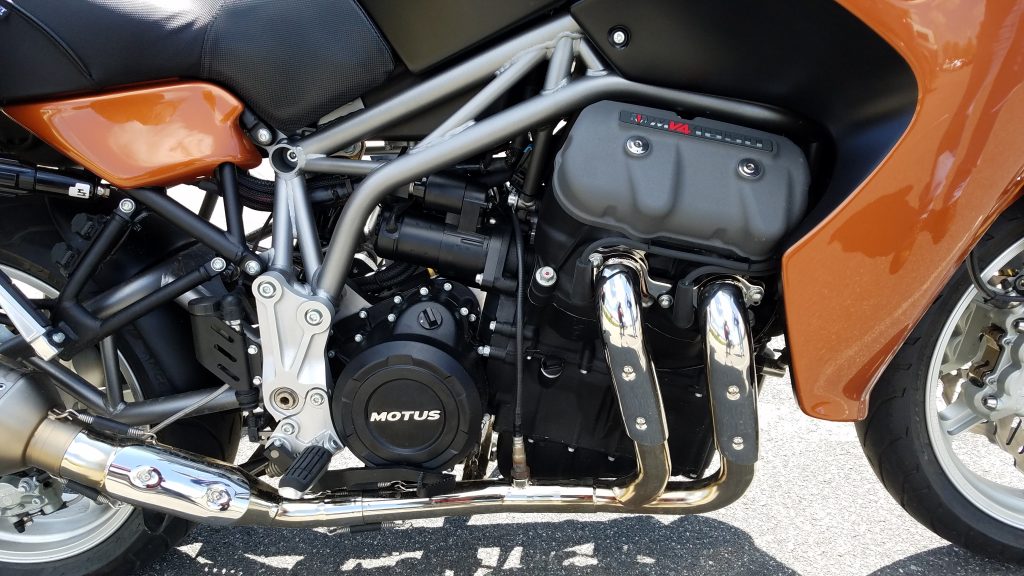 The rest of the bike leaves much to be desired…  Such as traction control, ride modes, ABS…  For the price, it needs those things.

END_OF_DOCUMENT_TOKEN_TO_BE_REPLACED 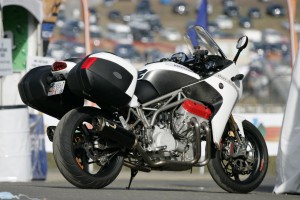 There is a brand new Motorcycle Brand that has just popped up.  MOTUS.  And they are impressive.

Basically they have a new engine design.  A V-4 specifically designed motorcycling.  Small, compact, big bore, lots of power. 160 horses.  You gotta love that.  I especially love the Moto Guzzi look, but doubling it up.  I like the engine configuration and aggressive lines is has… with the claimed power delivery it should be one hell of a ride.

Two versions, Sport Touring and Sport.  Basically it’s one bike and they just put a fairing and some luggage on it to make the other.  Simple.  I like that.
The overall look of the bike is that a Ducati and a Motoguzzi had a relationship… Engine and frame showing off the technical aspects of the machine. I don’t know if I can live in this world and not have one of these bikes! Oh wait. There is the price aspect. Hold on to your seat, Moto Fans… 30 Grand Plus from what I’m gathering. That’s expensive for a bike. Very expensive. You could buy a BMW S1000RR for 16-18 Grand depending on options, and pretty much all lesser machines for less than that. This Motus? Wow. That’s a lot of money for something brand new like this with no track record to stand on. But the engineering support that went into these bikes is impressive indeed. Oh wait, what’s that? Well, your right. Some Harley Guys will spend more than that on their HD Branded Leathers and matching Hard Case Luggage. Yeah, just so they can ride their twice a year tour to show off that they are Bikers. I know. You’ve seen them on the road. Sparkling new machines that are five years old and less miles than some of us ride in a month and every bit of kit they have on the bike or themselves is all stamped Harley Davidson. So in that perspective, a Motus is cheap.
My concern about these, and any new engine. Is how does the engine run after 50 thousand miles? I’ve seen some engines that are nice and tight and keep their performance and then it just comes apart with no hope of regaining the efficiency it once had. Others chug along happy as can be forever as long as you keep oil in it. I don’t want one like an Audi engine… Fine until it starts to unravel. I hope this Motus engine is more like Ford’s old inline 6 truck engine they used to make… the things were bullet proof. If it had oil in it and gas, the engine would run. That kind of reliability is what I would want out of this new Motus powerplant. 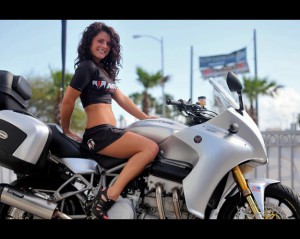 That engine would look amazing in a custom chopper frame, wouldn’t it? Considering that Motus is selling those engines as crate motors, I’m betting we’ll be seeing some wild custom builds.

If I had the money, I’d certainly buy one.  Of course, I can’t even afford to pay attention, so a machine like this is a pipe dream at the moment.  But still… what a sweet sweet dream it is.   If I could, I’d buy the stripped down sport version.  Because an engine like this, you are not getting the big mile numbers back for a tank of juice, and those don’t look like the largest of fuel tanks given the size of the airbox that motor needs.  And the seat looks like it gives you little room for moving around.  So even with the claimed “Large Fuel Tank” on the product page, I’m guessing your getting barely over a hundred miles on one refill.  To me, that’s not a Sport Touring machine.  This machine looks like it just needs to be stripped down and enjoyed for what it is… a Beastly machine that wants to tear shit up.  I’d want to keep it pure.  You don’t see a lot of Ducati Monsters wearing hard luggage, now do you?

Huh… This or that Confederate Hellcat?  Man…