You guys know I’ve been weighing the Newt and Mitt thing ever since Newt got serious.  I’ve been thinking about this a lot.
I’ve come to the conclusion that Newt, while he would make for a decent president, the man is just not electible.  There is little chance he could win.  I really think that if Newt gets the nomination, Obama will win reelection.
When Dr. Savage offers Newt a million bucks to drop out… That shows us the crest of a huge Anti-Newt wave that’s only just starting to form.  The push against Newt is going to get a lot worse.   Those that are in the middle, the fence sitters – those that tip election scales, are not going to pull the lever for Newt.  He is obnoxious and disliked.

This leaves us with Mitt as the only tangible candidate that has any hope in Hell of winning against The Great Halfrican.  Like it or not, that’s the situation.  I’m saying this, knowing full well that Romney is as likeable as… something that’s not very likeable.  I also hate the fact that he goes to the same church that I do.   But he could run and win against Bamma. Newt can’t.

So here’s my prediction…

END_OF_DOCUMENT_TOKEN_TO_BE_REPLACED 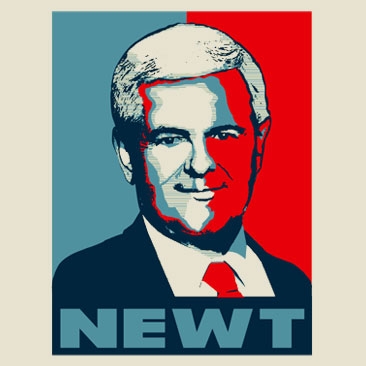