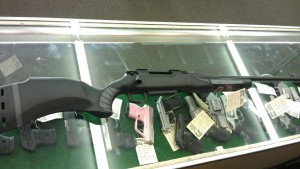 It’s “Wash Your Eyes Out With Bleach” ugly.  The option of swapping barrels means nothing to me… So why do I like it?

Well, as stupidly hideous as the damn thing looks… it feels awesome when you bring the gun up to your shoulder.  And the trigger… honestly, it’s one of the best “Hunting” triggers I’ve ever felt on a gun intended for actual hunting.  It has some weight to it… but there is no movement and it breaks as crisp as any gunwriter metaphor can equate.  It’s not a Bench Rest Trigger… but you don’t want that on a Field Gun.  Too many people think they do… and those people are terribly wrong.  You want a trigger that has a touch of deliberate intent, and then breaks exactly at the moment you want it to.  Like this trigger.  The height of the comb is perfect for when you mount any reasonable scope.  This allows a good consistent cheek weld, consistent aim through the scope… and combine with that trigger… this is going to let you make those once in a life time shots all the time.

We got in the Ruger SR22 and the new TC Dimension.

First the Ruger.  Of the small .22LR tactical pistols… SIG Mosquito and Walther P22 are the most common of these… I think the Ruger is the best one made so far.  Very good machining and good polymer. It doesn’t feel cheap.  Fixed barrel, so it has great accuracy potential.  I like it, if I am honest.  But it does have a really crappy trigger… hopefully the trigger smooths out with use.  If it did, the gun would really shine.  Ruger needs to clean up the toggle-like triggers and make a version that has an extended threaded barrel with target sights.  So, yeah, I think it’s worth buying.  If you look at one in the store – ask the Clerk to put on the Large Grip.  Feels great in the hand with the bigger grip on it.  (and my hands are not huge… really kinda average. My glove size is just “Large”)

TC’s new Bolt Action Switch Barrel.  Clever idea… futuristic styling… interesting way they do the barrel swap with an included torque wrench system that makes the barrel swapping consistent… adjustable length of pull with the stock spacers… overall, someone did their homework coming up with this one.
But I hate it.  I don’t actually like anything about this gun and I would be money this gun is going to be a huge commercial flop and TC should stick with making Encores with new names.  I think this new gun looks like a SciFi Channel prop and feels like something made by NERF.  I hate that rifle.  Fortunately TC is making a solid rifle in the VENTURE series if you want a TC Bolt Action… great price for the performance value and you can’t go wrong with it.   For 450 bucks you can get a whole new rifle… verses 300 for just a new barrel.  Come on.  Metal Tube, or a whole new rifle in that new caliber you want.  I understand every penny counts, but really?  Unless you are a wildcatter and are coming up with new stuff to test – and you don’t want an Encore for some reason… Well, then maybe this new Dimension is for you.