There was this list online some place… that listed the BEST BURGERS in the NATION.  Every State had some entries…. And one of the ones for North Carolina was El’s Drive In in Morehead City. 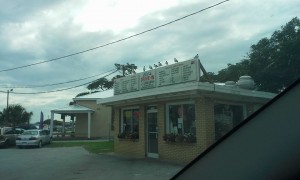 Right off 70 in Morehead, right next to some big old hospital.  I’ve heard their advertisements on the Radio a bunch of times… and then this list shows up.  I decided I had to try it. 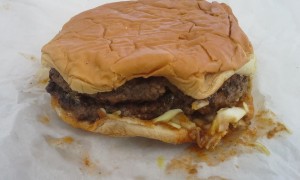 This is their Double El’s Special with Slaw and Chili Sauce.  Supposedly their best burger.  Ordered a Coke and some onion rings to go with it.  The onion rings were pretty good.  The Coke was in a freaking can… and that Special Burger… It was… Special.  The chili sauce and slaw – was on so thin as to only serve to make the bottom bun soggy as hell.  You couldn’t really taste it.   The bottom bun was like a wet napkin about the third bite.  The beef – there were two paddies, yes… But they were flavorless and dried out.  So I had a Dry and Soggy burger.  You know how you burn a paddy on a grill really bad and then slice off all the burned layers?  THAT is what these paddies tasted like.   Dry flavorless meat.   Quite seriously, this was one of the most disgusting burgers I’ve ever had in my life.  At least I had a 2 dollar can of Coke to wash it down with.

All is not lost at El’s though.  I did also have an Oyster Burger.  Maybe it was good? 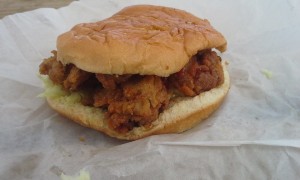 Nope.  What you can’t see was that it was drowned in ketchup under that flaccid bun.  The oysters were fried waaayyy too long in the deep fat frier, and were about has tender as charcoal with bits of crust as hard as granite.  You could break your teeth on these things.  Oh, and if it being rocklike wasn’t enough… the oysters were filled with sand… and small chunks of gravel.

Overall, El’s Drive In was a most unpleasant place to eat.  Unpleasant meaning, flat out nasty.  The service was good though.  The lady was prompt to my vehicle and very nice.  But as nice as she was for a 50 year old Car Hop, I don’t think I’ll ever go back.   In fact – I really wish I didn’t go in the first place.

I do not have expensive tastes when it comes to food.  I have eaten in the finest of restaurants, and I’ve eaten food prepped by the finest chefs.  And quite often I find that I would rather be eating something else… something simpler, and something more ordinary.  My Death Row Meal – Will be one of these:

Hot Dogs.  Good old fashioned dirty water dogs with steamed buns.  Top that with mustard and kraut and I could eat that all day.  Mustard and ketchup and chili… give me three and I can call that a meal.  Love hot dogs.  The simplicity of them, the versatility, all delicious.  If you don’t like a good hot dog – there is something wrong with you.  Best Dog?  Anywhere, but if I’m buying for me – I’ll buy Smithfield’s cheese filled dogs and some good spicy brown mustard.  (Classic yellow French’s if I’m doing a chili dog)

Burgers.  The Bacon Double Cheeseburger is the pinnacle of the Burger, but there are so many variations you could eat burgers for the rest of your life and never have the same one twice.   It’s such a broad spectrum that Burgers are it’s own food group.  The best Burgers?  The Buffalo Burger at the Bohemien Brewery in Salt Lake City.  Can’t get that? Five Guys.

Stew.  Beef Stew, Chicken Stew… whatever stew you have, I’ll have some.  I’m not talking Soup.  Soups are good – but Stew is a whole new level and they can be absolutely exquisite when done right.  The best stew?  My wife’s.

Tacos.  Now, the taco has some controversy to it.  Flour or Corn on the Tortillas.  Well, there is no controversy – it’s Corn.  And if you think flour – you are wrong and should fix your nasty self.  Take a flour tortilla and FRY IT.  Don’t microwave it.  Fry it.  Throw some meat on it, some diced onions, cilantro, some salsa or hot sauce… maybe some cheese and tomato, that’s fine.  But keep it simple.  So delightful.   Especially if you get them from some place that is not Taco Bell.  Now, those T-Bell Crunchy Tacos… That’s fine if you are in the mood for the crunch, but they do not hold a candle to the pure joy of a hot corn tortilla filled with spicy meat. I could eat tacos every day.  The best Tacos?  My wife’s.

Fish and Chips.  English Style “Fish and Chips”.  Beer battered, doused with Malt Vinegar. Maybe a little black pepper and salt on the chips.  Any time there is Sea Food or Fish on the Menu – I look for the Fish and Chips.  I want thick fillets, with a fried crust that’s golden brown.  And I don’t want anything else.  The best I had – was at a little Roach Coach in Richmond, VA.

Enchiladas.  If you like flour tortilla enchiladas, we can’t be friends anymore.  Corn, again.  And Fried.  Never green sauce unless it’s chicken.  Do not – DO NOT put green sauce on beef enchiladas.  Ever. Red.  Red sauce on everything – even chicken sometimes.  Lots of cheese.  Oh man… That’s Sunday Dinner stuff.  But the problem is that they take too long to prepare and there are never enough left overs.  If you make any – make 4 pans worth.  At the least.  2 pans – you are way short.  Only 1 pan – Why do you hate your family?  You only made enough for me.  The best Enchilada’s  Mine, when I make them.

Pizza.  There is Pizza, and then there is “New York Style”.  New York Style is fine… But I prefer a little bit thicker crust – like a “Hand Tossed” Papa John’s crust.  I don’t like the thick bready crusts like Pizza Hut – those oil sponges.  And I like toppings.  New York Style is too dang thin.  I needs a lot of toppings.  I like lots of flavors that work together – vegetables and meats have to harmonize.  A Spinach Pizza can be wonderful.  The most important element in a Pizza, after the foundational crust – is the sauce.  You can have everything else right, but if the sauce is lame – you have lame pizza.  And you have to have enough sauce.  I hate the pizzas that have almost no sauce on them.  They are missing out.  And I also hate the pizzas that lay down the cheese and then the toppings.  If you are going to do that – lay down some more cheese to hold the toppings on!  I don’t like just a pepperoni pizza.  That’s tired.  I need more to it… and less grease, please.  Default favorite? Papa John’s.  And I get the pepper.

The Breakfast Burrito.  The Holy of Holies of Breakfast foods and one I could eat at every meal.  I want the Burrito to be fat and heavy.  The filling – no RICE, damn it.  I hate burritos that have more rice than everything else.  That’s cheap.  That’s a dodge.  That’s a half-assed attempt at a Burrito.  The Breakfast Burrito should be filled with eggs.  Going in there with the eggs, some hash browns, some sausage, and some cheese.  Maybe some jalapenos. Maybe some tomatoes.  The tortilla here can be flour.  But it needs to be thin and chewy, not thick and bready.  It’s got to be strong enough to contain the filling.  I don’t want it breaking open mid bite.  I also don’t want to be chewing a mouthful of tortilla.  So the size of the tortilla verses the filling must be in balance.  I’ve studied the art of the Breakfast Burrito for decades.  And I’ve had it all across the country.  You know where the best one I’ve had was?
Just off I-95 at a Sheetz.  I was in Breakfast Burrito Nirvana.  I ordered 3 for the road and the only regret I have on that decision was that I only ordered 3.

Chili.  Like Burgers – this could be it’s own topic.  A good Chili is a work of art.  You can argue Beans or No Beans… But if you don’t have beans in your chili – you have Hot Dog Sauce.  Other than that, there are so many ways to make a chili, and none of them wrong.  All good. Unless you screw it up.  First off, it needs to be thick.  It needs structure.  It needs to be able to hold a spoon straight up.  Anything less and you have soup and should be beaten.  Thicken it up and live.  A good chili can be hot, as hot as you like.  But don’t make it sweet or tangy.  It needs to be spicy.  At the very least it should warm your mouth.  At the most – maybe causing spontaneous human combustion is too much.  My last chili – I made women, children, and shaved men cry.  It was heroic chili.  It was chili for bearded men only.  It was the best chili I had ever made.  The best chili I had ever had someplace else?  I had a bowl of chili at the Pelican Lake Cafe 15 miles out of Vernal Utah.  That was some fine chili.

Best food in the North East corner of Utah.  They have burgers there that rival anything else out there… I mean they are seriously good… I want one right now.  Breakfast Burritos to kill for.  I had a good conversation with the owner… as I sold him a tactical shotgun.  A Rem 870, of course.  Cool guy.  Proud of his establishment.  His favorite is the Chicken Taco.  Open from 5:30 AM to 8:00 PM, Monday to Saturday… Closes at 2:00 PM on Sunday.  If you are in the area, stop bye and tell the Owner that the Ogre sent you.  And then get the Pelican Burger.

For some time I’ve had a recurring dream.  I pull up to the back of a cafe, get of the truck, go to the back of it and pull out the 50 pound back of flour and carry it inside.  Inside, my oldest son is mixing up bread dough.   Other family members are chopping and prepping, while my wife is rolling dough and cutting out chunks to be made into buns, and crusts.  We have a hand made old fashioned brick oven that we use for baking burger buns, breads and pizza.     The joint is called “The Fat Ogre’s” and the signature dishes are “The Epic Burger” and “The Monster Pizza”.

I have never wanted to work in the food industry, so the dream is strange.  But I could probably do it for real.  I do make some freaking epic burgers.  Grilled, not fried.  Just sayin.   I’m a foodie… always have been.  I bet I could make it win.   Not that I am planning a career change any time soon… but Vernal really could use a good destination type eatery.