As some of you know, I’ve taken off the motorcycle helmet and enjoyed the luxury of a four wheeled cage.  The requirements of my cage were complicated.  I needed to pull a trailer not just across country, but over the Rocky Mountains.  It had to have enough room inside to help in a move across country.  Clothes and “Stuff” for 3 people going One Way.   So I was thinking, “Truck” with such things as “Big” and “Four by Four”.  Then I took into consideration that once I reach my destination, those requirements were no longer required.  With a new career change and a new area of operation, I would have a whole new set of requirements.  Fuel Economy.  No need for all wheel drive, because it rarely every snows here in the winter.  Long Range Comfort.  The ability to get up and haul ass was wanted as well.  Throw in the requirement of being able to stow some large rifle cases when needed and my vehicle selection options started fall off the table.   I didn’t need four wheel drive anymore.  So no truck…  but I needed more room than a 2013 Camaro, which was a consideration.  Also, I hate getting pulled over, so I wanted something that would be “Road Stealth”.  Meaning a cop’s eyes just glaze over it as I slide past at 10 over. 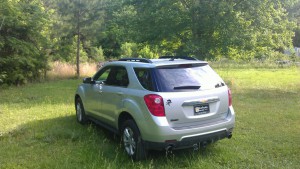 You guys remember my previous considerations.  And this one is a bit different.  The Equinox was the winner.  Smooth, good power delivery, and in the 2LT trim package, well appointed with the features I wanted.  This vehicle was purchased from Gus Paulos in West Valley, Utah.  If you are thinking about a Chevy – That’s the place to go.  The General Manager this a Rock Star, and you can tell him George, The Mad Ogre, Hill sent you.  They went out of the way to get the Trailer Hitch installed for me late on a Friday Evening…  Two Thumbs Up.  They did a great job.

Remote everything.  Even remote lift gate opening, which is a feature I didn’t really care about but now that I have it, will insist all future vehicles have.  XM, Sat, Blue Tooth, all that.  Back Up Camera, which is amazing now that I’ve gotten used to it.  Touch screen to control all of the tech.   Driving across country, I played Larry Correia’s SPELLBOUND book through Audible on my phone, through the stereo via Blue Tooth.  We also listened to STARSHIP TROOPERS, and a book called RED SHIRTS by the same author as Old Man’s War.  Great books, btw.  Made the drive across our vast nation very enjoyable.  The ride quality, comfort, and smooth ride, made the long trip easy… even pulling a trailer.  The 300 + Horse V-6 Engine was never labored in it’s task.  MPG were a consistent, 20 MPG’s while pulling the High Drag trailer.  And with the smallish 18 gallon fuel tank, stops to refuel were more frequent than I’d like.   However once that trailer was disconnected, something happened. 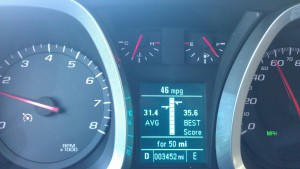 Look at that read out.  That’s an average for 50 Miles.  Not just a down hill with a tail wind situation.  And I was cruising at a set 60 MPH.  31.4 Average, with a top average of 35… in a V-6 SUV with no hybrid stuff going on.  I don’t care who you are, that’s damn good.  (I’ve had motorcycles that didn’t get that good of mileage!)  And since where I’m at, 55 MPH is the top speed anywhere, these numbers are suiting me just fine.  To get these numbers, the engine is not down tuned, or leaned out.  It’s got power.  When you romp on it, you feel all those ponies start bucking and you move out.  When you do that though, hold on.  Torque Steer comes into effect big time, and you are going to have to fight that.  But when you do, and you get used to it, you can get solid launches and roll on passing power.  I find that the car is never lacking on power.  And all of this is with the AC blasting.  Because I found that I really love a cold AC.

Handling is good.  It’s no sports car, being a Cross-Ute.  But it’s no slouch either.  It handles far better than any truck I’ve ever driven, or larger SUV.  And it handles better than the peers in it’s category.

I like the looks of it.  It’s a clean design.  Aerodynamically, it’s slippery.  To the eye, if find it an attractive little Crossover SUV.  I love the look of the interior.  It’s got fantastic cloth seats, well vented so you don’t feel sweaty when it gets hot out and the AC hasn’t wound up yet.  Looking at any detail or area of the car, it’s just good looking. Handsome, but with out any raw sex appeal of a sportier vehicle that will make a cop look at you with scrutiny.  And come on, I’m a Motorcyclist, if I wanted raw performance and sex appeal, I’d jump on two wheels instead of four.

It’s easy to park.  Being as smallish as it is for an SUV, I can park it anywhere without being cramped.  It’s turning radius isn’t the best out there, but it’s better than most.  Really it does nothing outstanding but then again it does everything well.  It’s very Competent.  Consistently Competent.  Because those vehicles that do some things spectacularly well, do other things shockingly poorly.  This car just does everything well.  Price on this vehicle was 31,000 dollars.  Which puts it much less than other considerations with this vehicles features.  Such as the Jeep.  I see no reason for another 10-20 thousand just to have a badge that says Jeep. And realistically, I’m never going to go Rock Crawling again, so I just don’t care about the Trail Rated thing.  If I need something Trail Rated, I’ll use an ATV.  Value-wise, I think the EQ has been a home run.

The only vehicle I’d put against the EQ would be the Ford Edge… Another great looking Cross-Ute.  However the Edge isn’t going to give you the MPG returns the EQ can give you.   After getting to know the EQ, I’ve come to love it.  It’s probably the smartest vehicle I’ve ever had.