When I first saw the Vanderhall Venice, I was really smitten.  I was thinking it was the coolest thing ever.  And they are cool.  Don’t get me wrong, they are cool and they are fun to drive.    The problem I have with them is that they are 30 Grand.   For that much money, you can buy some pretty nice cars that are also fun to drive but also offer some practicality.  The Venice has no practicality to it.  At all.   The other cars out there that you could get also have a certain level of Build Quality.  And that’s my main problem with the Venice.  Vanderhall is almost there with it, but every car seems like it’s still a prototype.

The Venice has a vibe of a 60’s era Formula 1 car.  Like something James Garner drove in “Grand Prix”.  But they missed that mark in cosmetics and other styling points.  They also missed the mark on the “Modern Morgan 3 Wheeler” they were shooting at.

Let’s look at the details.  The grill just flat out looks cheap as hell.  It looks like an old-fashioned Ice Tray insert.  That’s a detail that bugged me from the very first instant when I saw it.  I like that the headlights are tucked in, but overall the impression is that the entire front end was just phoned in.  Also, the area below the grill being flat faced when it could have been more like a Formula 1 cowling.  It was a missed opportunity for greatness. 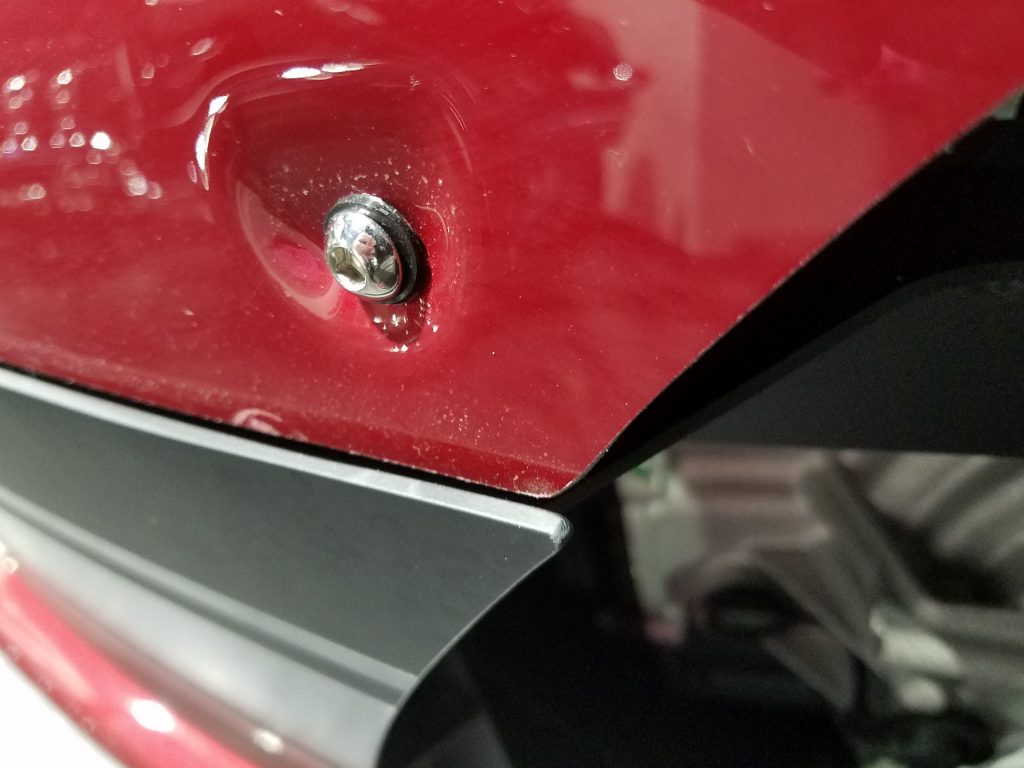 Moving along the side of the car, we see gaps and separations where there doesn’t have to be.  Also, the hood is bolted down with these screws… You can’t just pop open the hood.  You have to unbolt and remove it.  At this price point, a hinge would be nice.  And you could even put on some pins like a hot rod or latches like on a Morgan or Jeep or something.  But this is just a tragically lazy approach that makes it feel Kit Car than a 30 Grand turn key car. 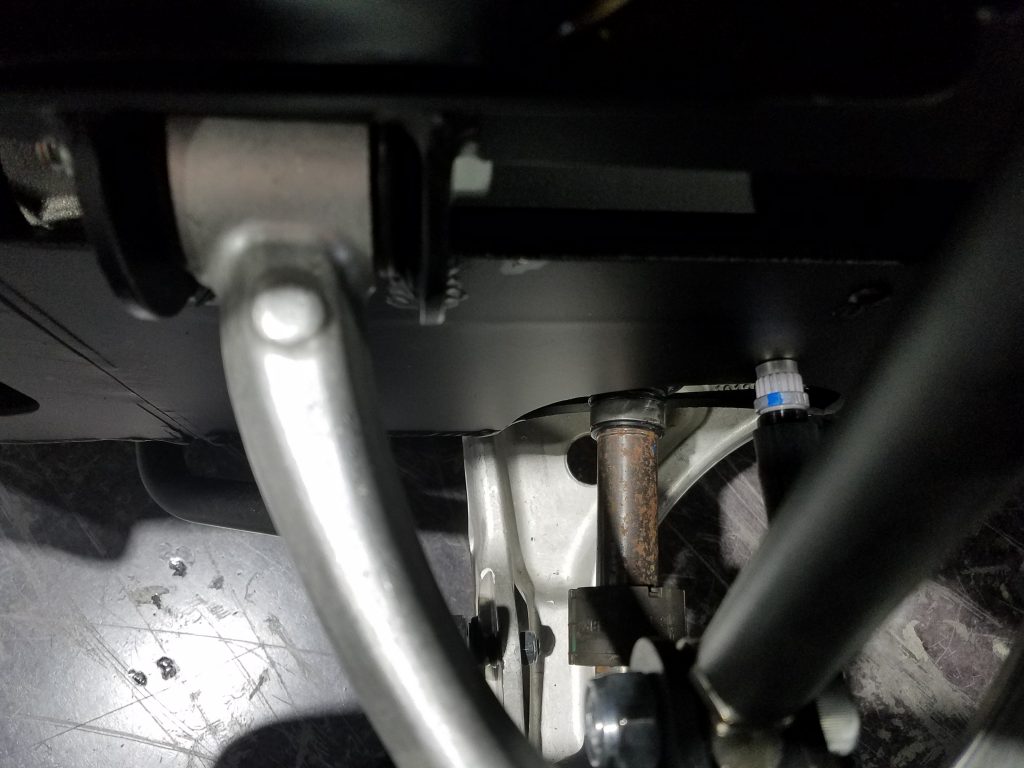 Every Vanderhall Venice I’ve seen… I’ve seen this.  Looking down through the front suspension, you can see the drive axles.    Every one of them I’ve seen has been rusty.  It’s like they are using plumbing from Home Depot and leaving that metal uncoated.  How hard is it to at least hit that axle with some sort of coating, any kind of coating… Even some Krylon would be welcome here.  What’s not welcome is Corrosion. 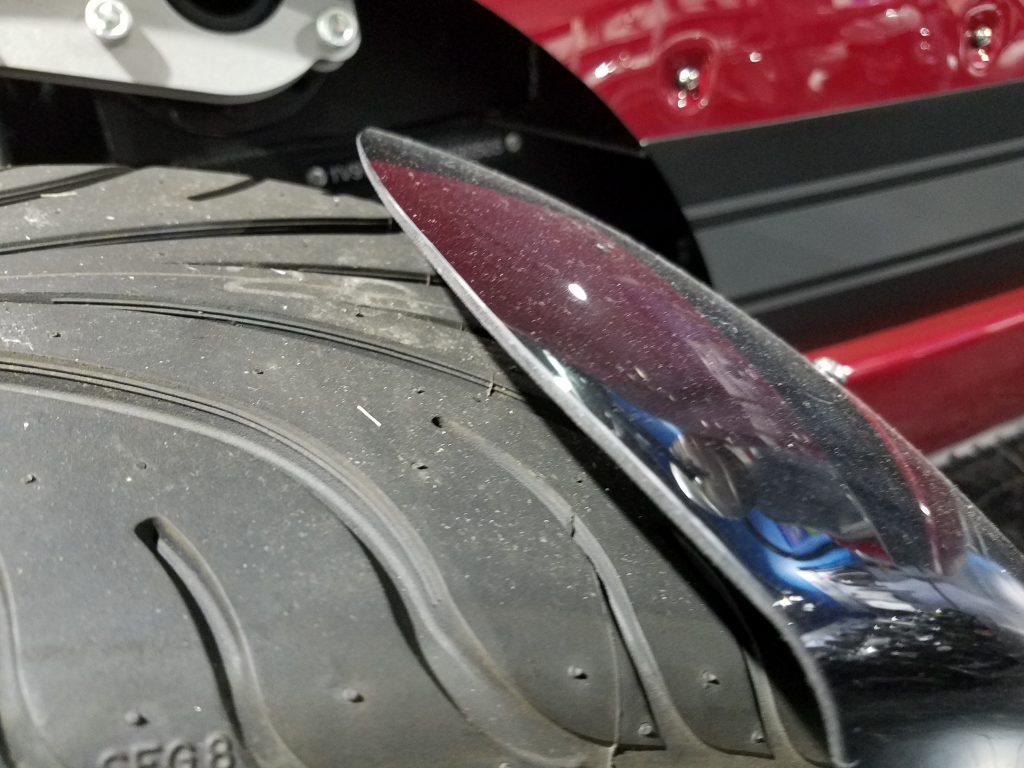 Right above the wheels are these fenders.  With edges that look like they came fresh off the bandsaw.  Unfinished, unpainted, and there it is… Raw sheet plastic.  I’ve seen better edges on Lunch Trays, not 30 Grand sports cars.   Sorry, not a sports car… Auto Cycle.  Okay, you know what Cycles have better fenders?  All of them.  A Huffy from Walmart has a better fender.  Also that Huffy’s fender is going to work.   Because these don’t.  You drive one around at all and you’ll find that road debris gets through around and often into the car… Yeah, wear your helmet when you drive one.  Because these fenders don’t do anything for you. 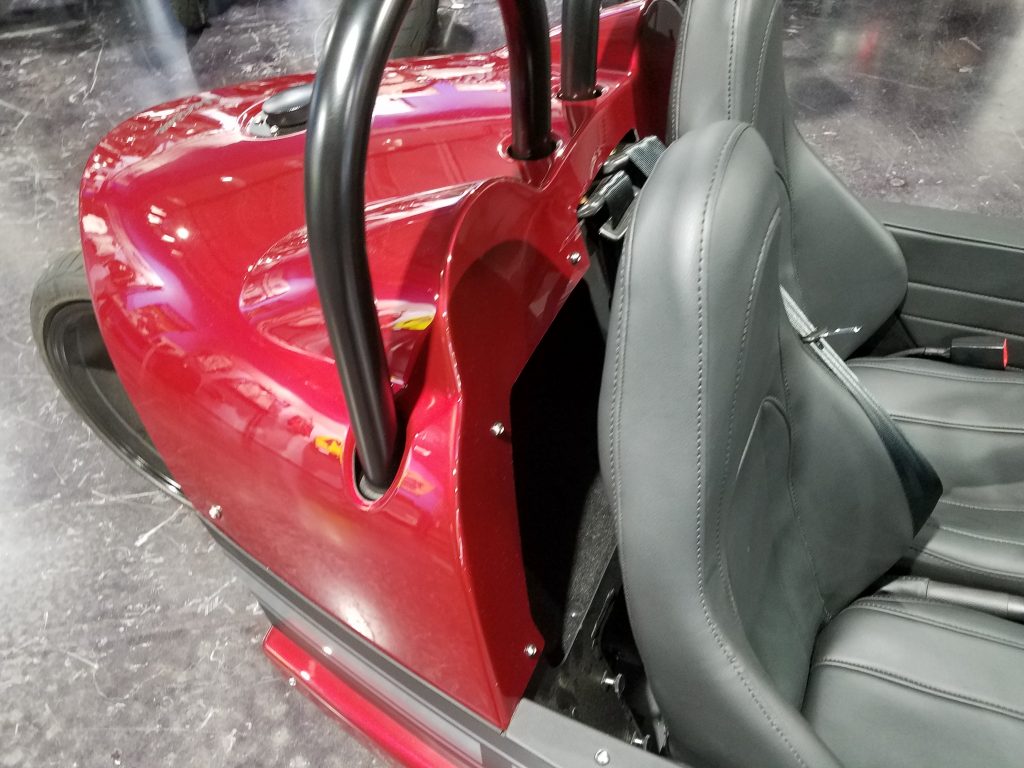 Behind the seats is a small cubby hole that I was told by a Factory Rep gives you some storage space.  This is not true.  Because the space is divided by a brace, and the seat doesn’t move forward enough to access it.  You could put a gym bag in there… If the bag was empty and rolled up.  That space is completely unusable. 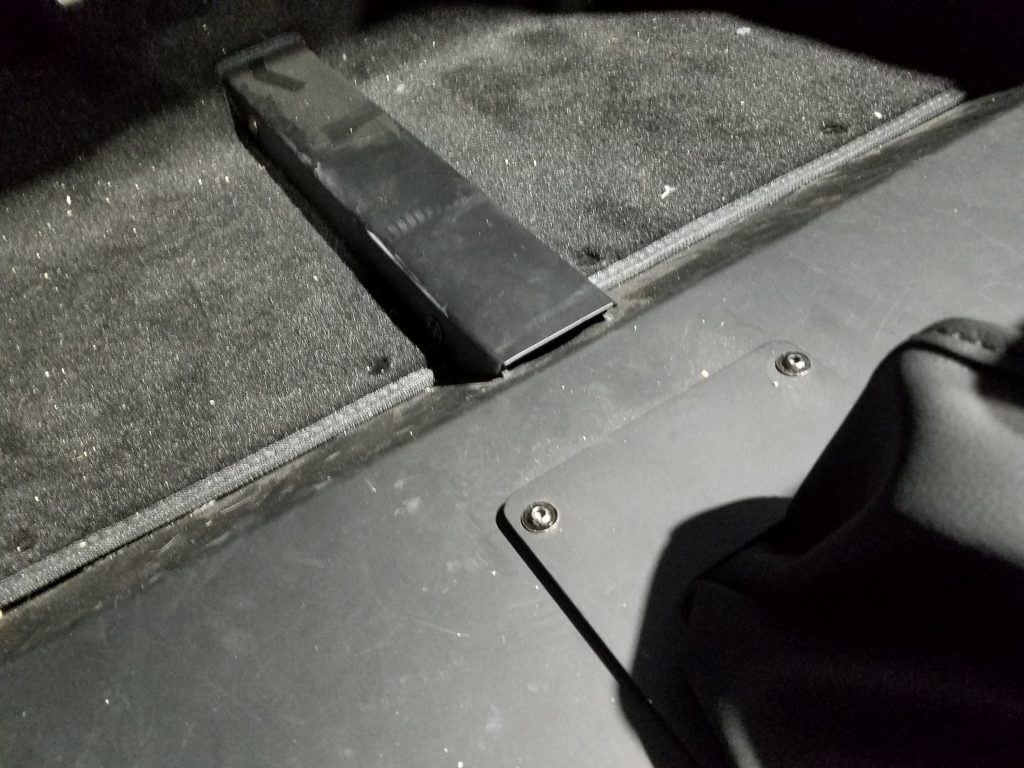 On the floor between the two footwells… You have this open ended bracket.  These things don’t have a roof.  If you are out in the rain, that’s going to fill with water.  Moisture trapped in there is going to cause a problem.   And again, like so many other parts… it looks cheap and ugly. 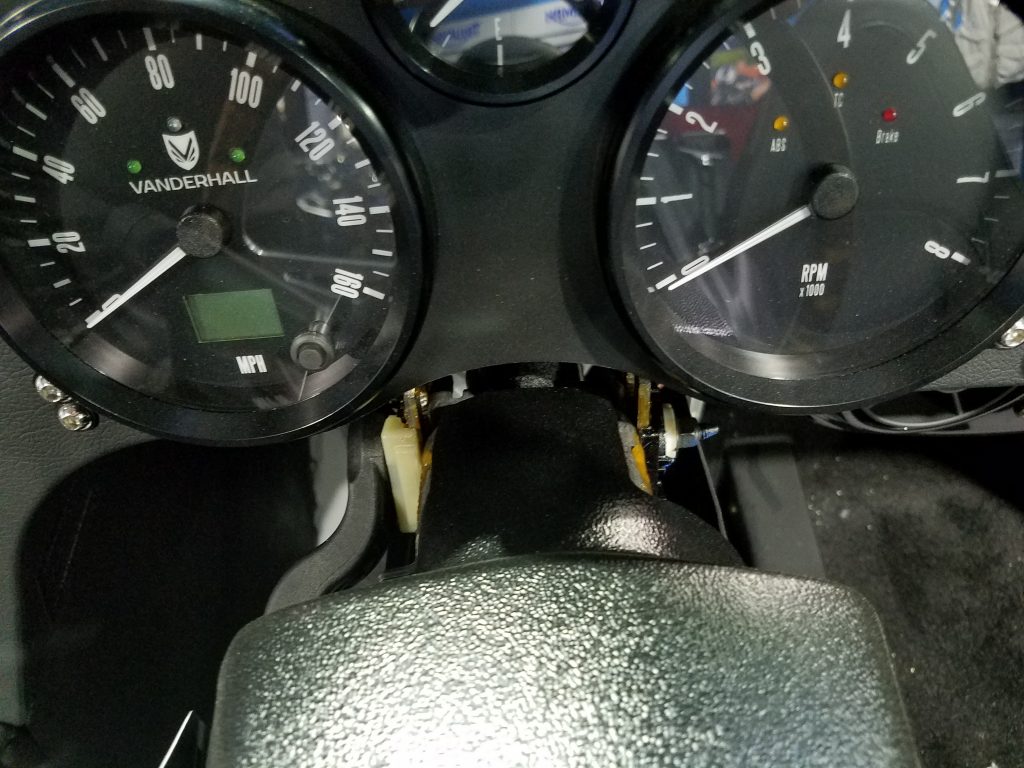 The gap between steering and instruments is wide open.  Weather resistance?  Just don’t drive in the rain and make sure you park in a garage.  This looks like a great place for bees to hive up into.  Because that’s happened.  Bees in the Dash. 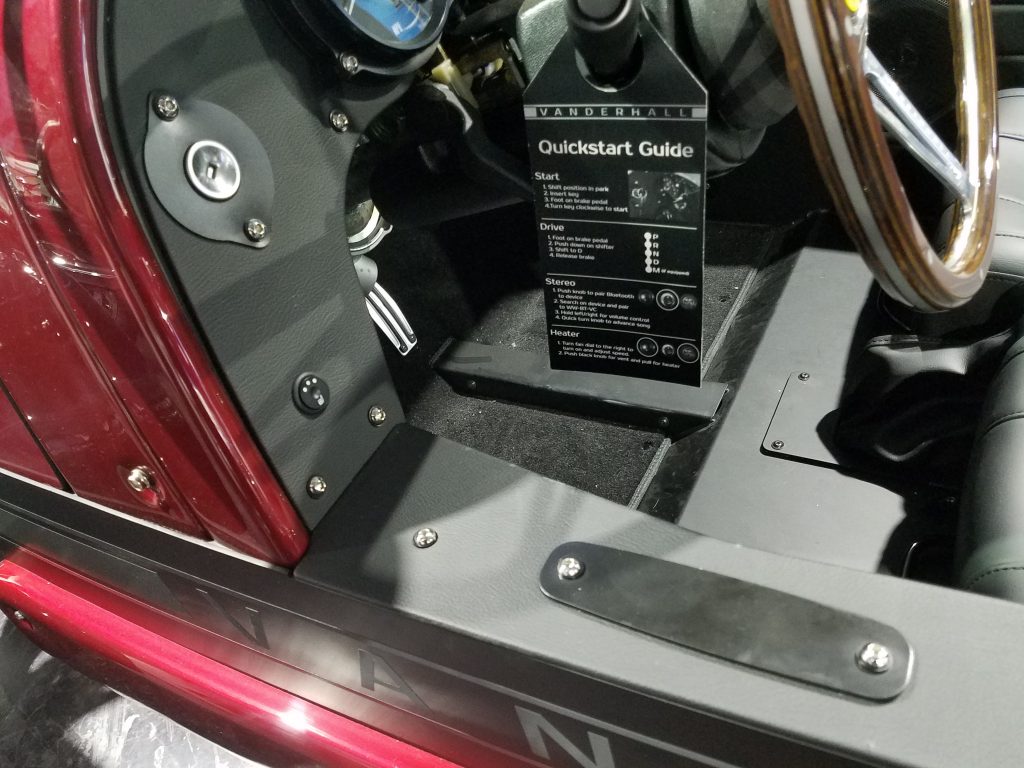 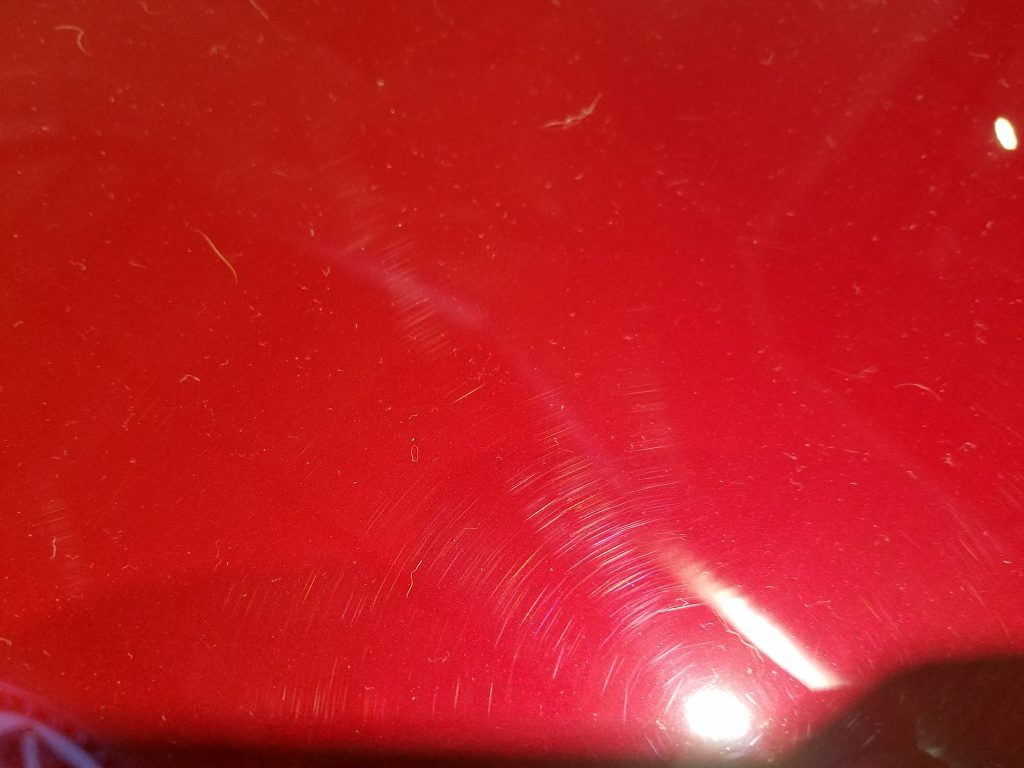 And then there is the paint… It’s as soft and delicate as the crust on a Baked Alaska pie.   If you try to wipe it off with a super soft microfiber cloth – you will leave swirls and lines.   If you just hold the microfiber cloth and look at the paint, you will leave swirls and lines.
Probably because there’s no paint on it.  It’s just the surface of the colored plastic sheet they bent to shape to cover the car.   Some real automotive paint and clear coat would go a lot way here.  Because with some weather and real world conditions, this is going to look like the fender of a dirt bike in short order.

What’s not shown is the Engine… Because you have to unbolt the hood..  The engine is a 1.4 liter GM 4 cylinder with a turbo.   The claim is 180 horsepower, but it feels like it’s far short of that claim.  There has to be some better options out there for the power plant.  When you are rocking side pipes like an AC Cobra, a 1.4 Liter is just not going to work.  The engine needs to fulfill the promises the looks make, and right now it just doesn’t.  A car that light should pin your head back to the seat under acceleration.  It doesn’t.  It handles well, if you are on a real smooth road… but the car just needs some balls.

The brakes need some work too.  There’s no modulation in the brakes.  A little pressure makes the car come to an abrupt halt.  The brake feel is not there… it’s either on or off and it’s annoying as hell.  I understand big brakes on a light vehicle… that’s awesome.  But the whole system feels like it’s still set up for a vehicle that weighs twice as much.  Because it was.

Steering feel?  It’s numb.  There’s no feedback.  It’s an electric power steering system that feels like it would be home in a Silverado, not a sports car.  I want some communication from the wheel.    Speaking of Communication, how hard would it be to put in a stereo system?  You have speakers.  You have that space behind the seats that you can’t use for anything else.  Well, that wouldn’t really help.  Just run a Bluetooth system through your helmet because you gotta wear a helmet with these things because of road debris from your own tires.  I recommend Cardo… because Cardo’s waterproof and there’s no roof on these things.

At this price level – give the car a Targa top.   Don’t know how?  Look at what everyone else is doing.  It’s possible.  Do it.

Overall the Vanderhall Venice is diamond in the rough.  But the car feels too cheap, and the engine leaves much to be desired.  The brakes and steering leave much to be desired.   The whole experience the Venice gives you, leaves you wanting more.   I pointed all these details out to one of the Vanderhall head honchos.  We talked about this stuff and I walked around the car pointing everything out.  He told the other guy to take notes.  And then they left and probably threw the notes away.  I got the sense that they didn’t care to hear about the problems with their baby.    Look, I want to love the Vanderhall Venice.  I do.  A Utah company based in Provo, I’d love to be able to support them… But even if I won the lottery and never had to care about money, I couldn’t buy a Venice.  It’s just not worth the 30 Grand.

30 Grand gets you a lot of Fun Car.  You could buy a new Jeep Wrangler, or a Mazda Miata, or a Sube WRX, or or or or… So many awesome choices that would give you a real usable vehicle instead of a novelty toy that you are going to get tired of before the first oil change.