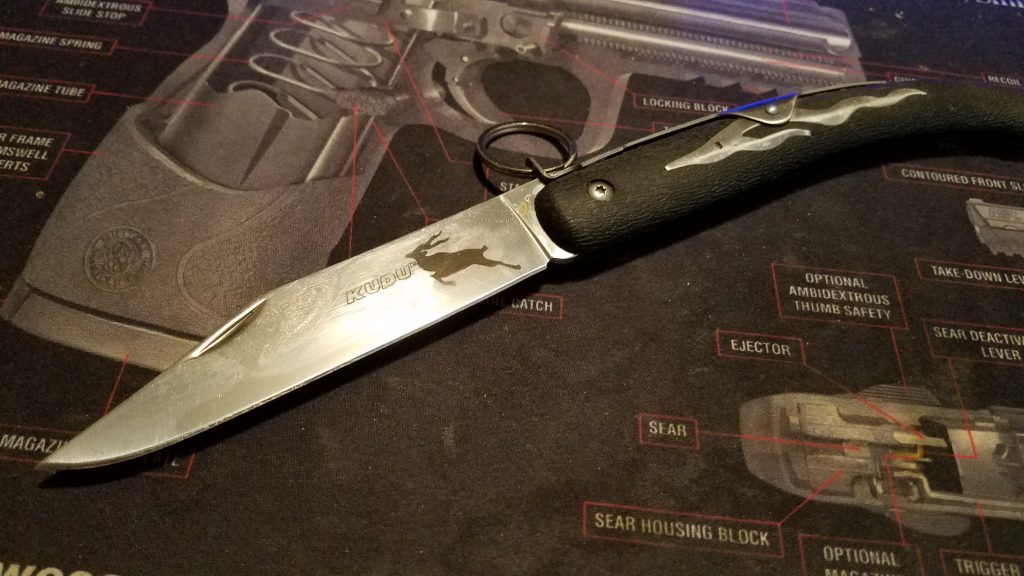 I don’t even remember when, where, why, or how I got this knife.  I only remember that it was really really cheap. Like McDollar Menu Cheap.  I think I remember getting a few of them and giving most of them away… But I held on to this one.    Cold Steel made a production version of what is a popular cheap folding knife from South Africa.
On one hand, I think maybe this is something that should have stayed in South Africa. 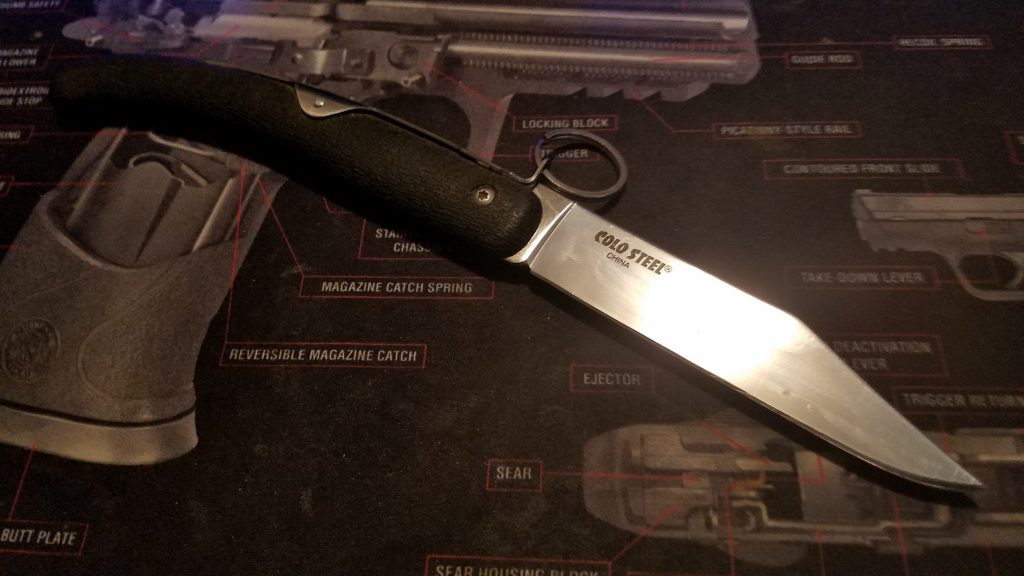 On the other hand… There’s something kinda charming about the Kudu… It’s super lightweight, and it has a good long blade of 4.25 inches.  However, this isn’t and shouldn’t be put in a Survival Kit… You don’t want this to be the blade you are trying to survive with.  The blade is made from some sort of unremarkable stainless steel and is well polished to make it easy to clean off… But the blade will dull rather easily… But you can quickly touch it back up on the bottom of a ceramic coffee cup with a few strokes.
This knife isn’t without its place… This is 100%, without a doubt, a very usable knife for its purpose.    Which is making Sandwiches.
This is a Folding Sandwich Knife, with a Ring Lock action. 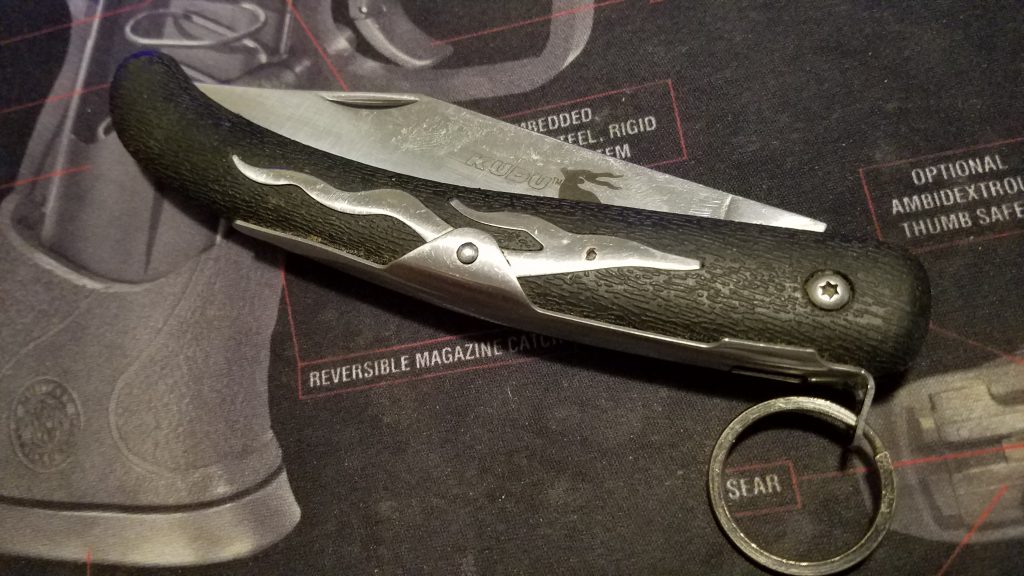 The blade is thin, so don’t even think about batoning.  It’s not hard enough to strike a fero-rod to make sparks.  However, for slicing bread, or melon or for any Picnic Food Prep Tasks… The little Kudu is all over it like Angry South Africans on a White Farmer.  And once you are done, wipe it off, fold it up and it can slip into a pocket, purse, or Yogi Bear Basket until you can get it home and toss it (opened) into the dishwasher until next time. 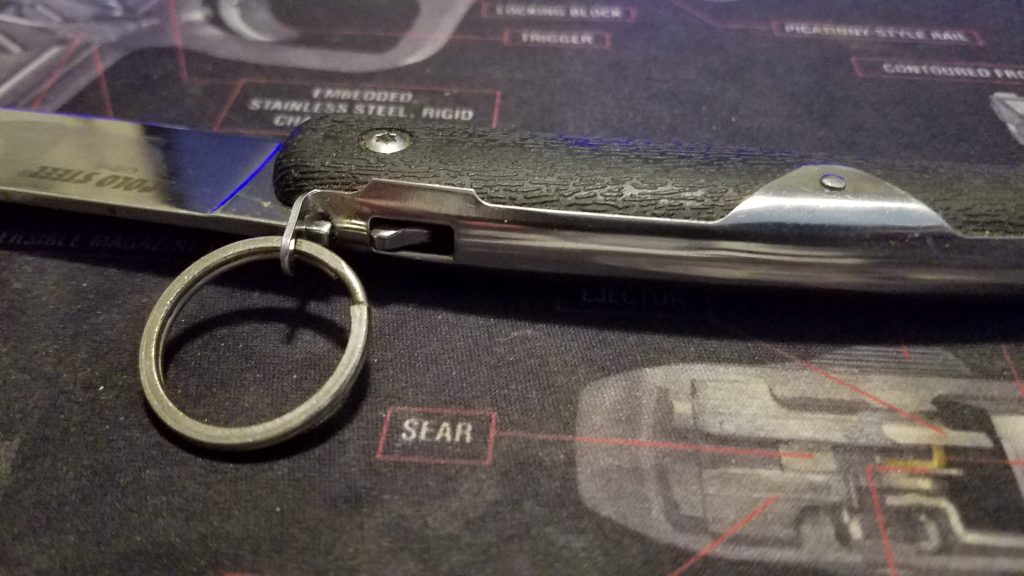 The lock though, has from Moment 1, made me nervous.  I don’t trust the lock.  But for spreading mustard and diced onions, and cutting a burger in half – It’s going to handle that just fine.  The blade, when you unlock it, feels like it wants to snap shut, but is prevented from doing so – barely – by some notches in the action.  But it feels like the knife still wants to.  So watch your fingers folding up this long thin knife.  One upgrade you can do is to replace the cheap ring, with a nicer ring from a Key Chain.   Not that that would actually improve anything.  But it might look nicer.
It really is truly a Dollar Store level knife that can fold.  It makes other cheap knives, such as an Opinel, feel like a work of art and craftsmanship.   In fact, don’t even think about these Kudus, get an Opinel and have something with some degree of class.
But, just in case you insist on a Kudu… fine… I checked on Amazon.com and found these knives for three different prices… and an alternative from South Africa with a nice wood handle, for less than one of the Cold Steel offerings.  See the screen grabs below: 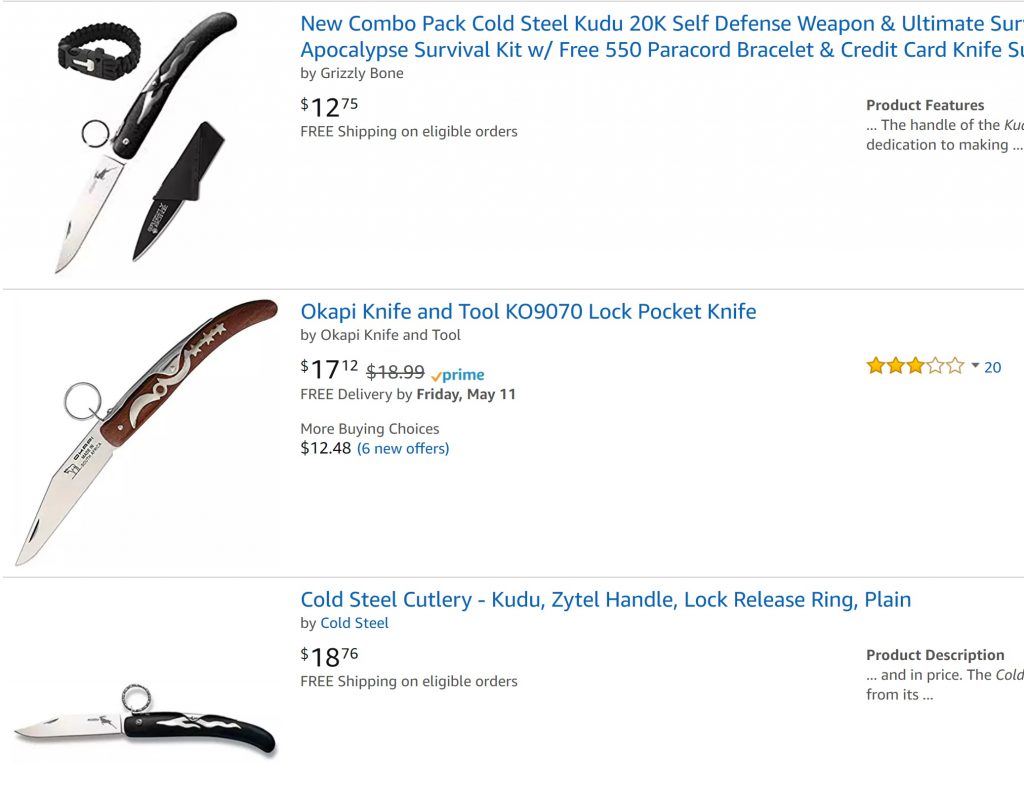 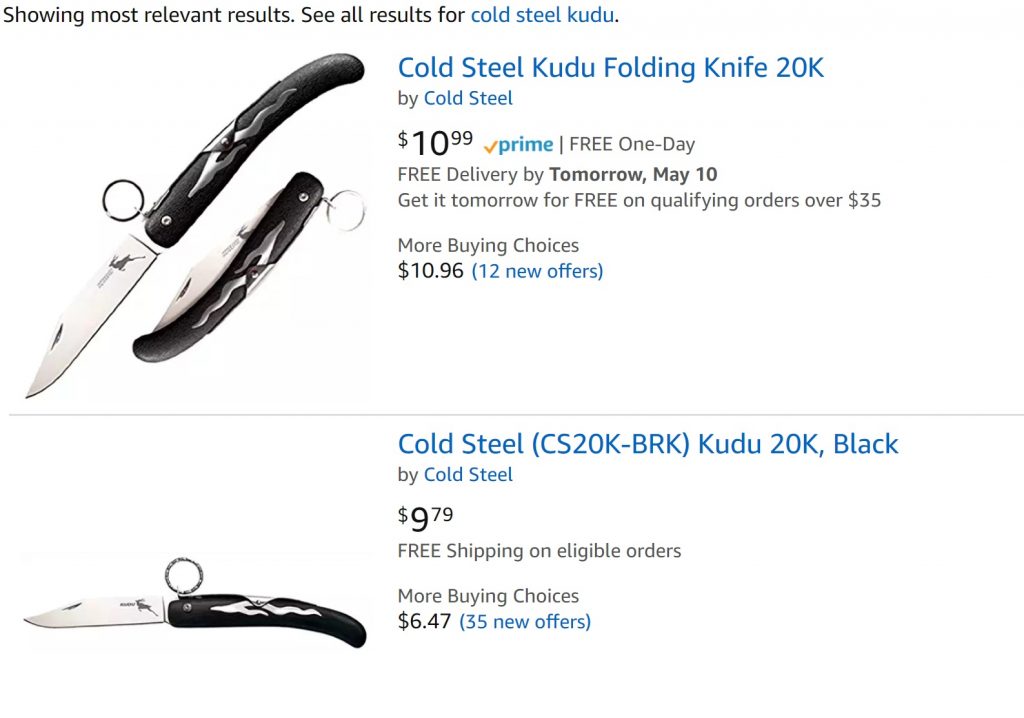 So, if you want one of these… Shop around.  It’s not a bad knife to have in a Lunch Box for Apple Duty, when you don’t want juices and mustard or whatever gumming up your more expensive knives.