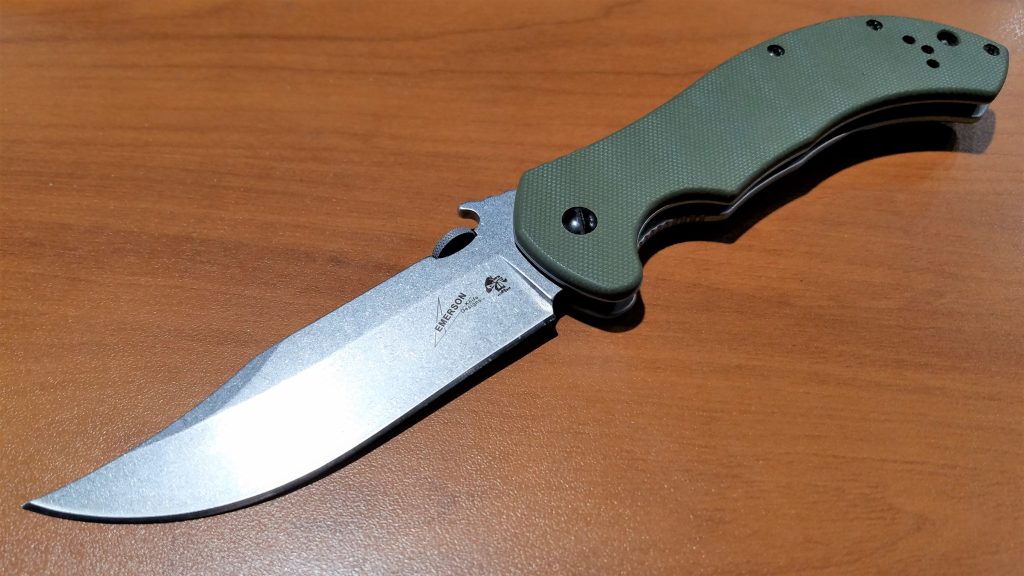 I’m a huge fan of Emerson knives.  Unfortunately, my budgetary priorities says I have more important things to spend my money on.  When Kershaw started doing collaborations with Emerson – it made me happy.  I’ve owned several and have been impressed.
Now, I’m an unabashed fan of the Bowie knife.  So when I saw the CQC-10 for the first time – I HAD to have it.  I had no choice.
Just look at how beautiful this knife is.  Just look at it. 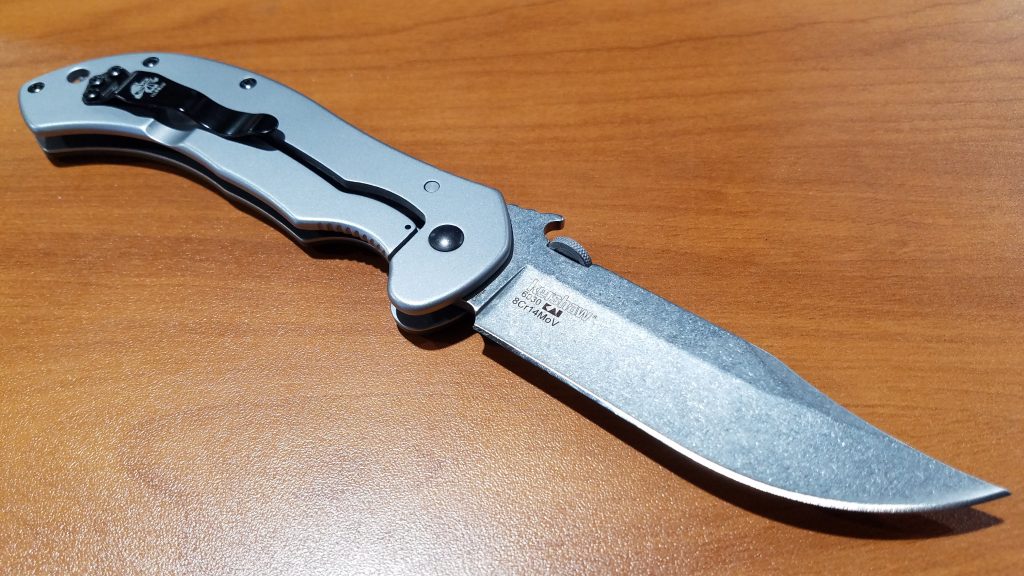 The upswept clip point of the Bowie style gives you a blade with a good usable belly on it, and a needle sharp tip that lets the blade penetrate, well, like a hot knife through butter.    I love that shape.  It’s a purely American blade style.  There’s history to it.  There’s culture in it.  There’s soul in it… American Soul.
Unfortunately, there’s a lot of Chinese Soul in this knife too.  It’s made in China.  It’s using Chinese 8CR14MOV steel.  So… Chinese American… Like Bruce Lee.  We can live with Bruce Lee, right?  8CR14MOV is said to be like AUS-8, but I’ve actually found it to be better.  I would say it is halfway between AUS-8 and S30V.  But I’m no material Scientist. 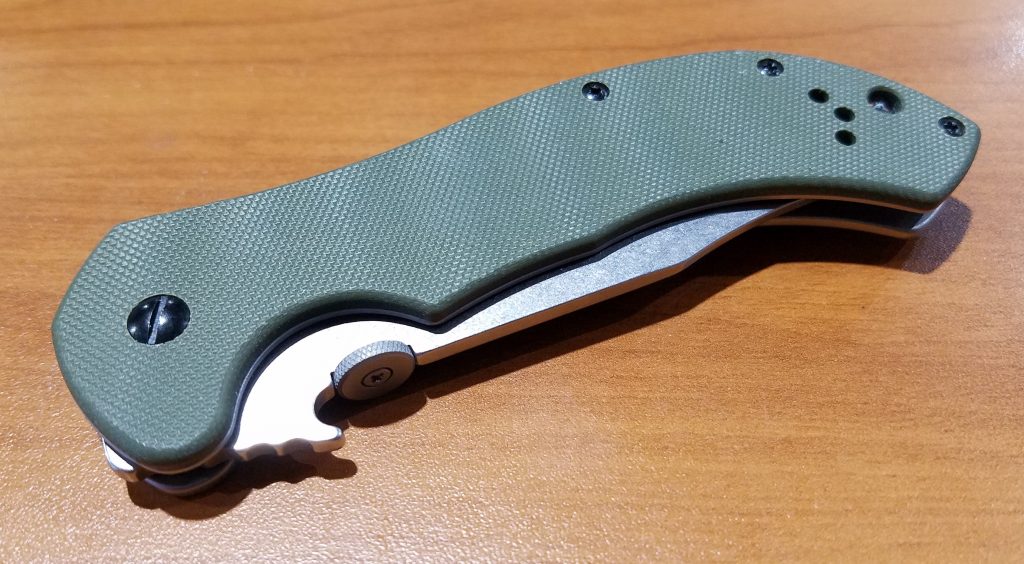 The other features this knife has, I also love.  Namely the Emerson Wave.  This is my favorite blade opening feature and also serves another function.  It provides a perfect place for your thumb when holding the knife in a Saber Grip.  The downside to this, is when does one ever actually hold a folding knife in a Saber Grip?  Unless you’re a Knife Fighter… and honestly I am not.  Far from.  This is why I carry a gun.  Pull a knife on me, and I’ll blast a great many large holes through you.  I will not be Crossing Blades with anyone.  Especially not with a blade only three and a half inches long.  Still… Playing with the knife, holding it in the hand… It does feel so good.  I do wish they offered a five inch version.  Because I’d have that too. 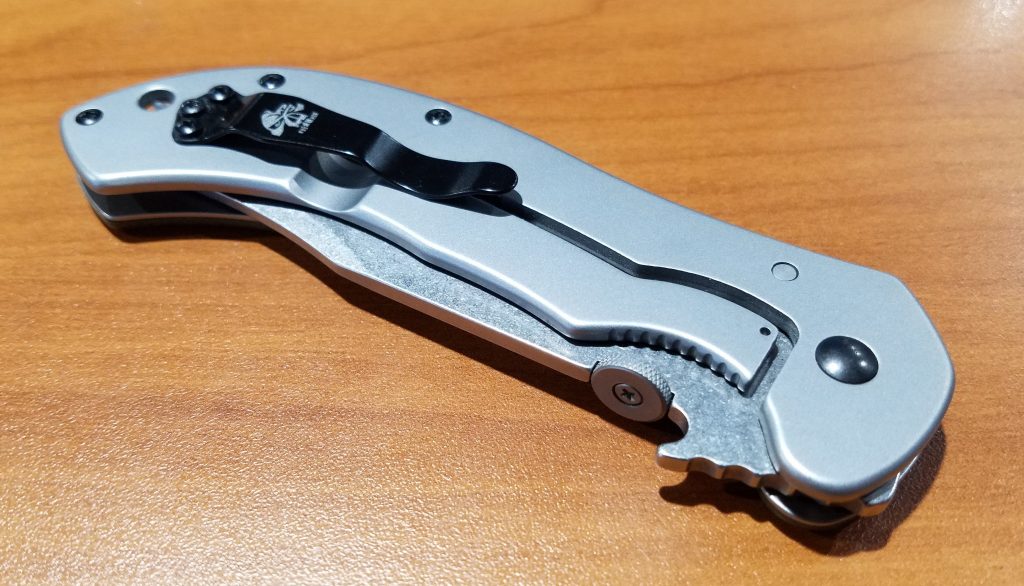 The frame lock mechanism is solid enough, and I do love me some frame locks.   I like the simplicity of them.  The Asymmetrical result of a frame lock with a G-10 scale on one side seems odd at first, but the grip and the thinness… it works and any oddity about it is worth it.  Also noteworthy.  The blade was perfectly centered within the frame.  When a blade is off center, it doesn’t just bother me… it makes me question the claimed quality of the knife’s production, and the company producing it.  Seriously.  I get judgy about this.

The clip is similar to what I like on Spyderco, Benchmade, and other fine knives.  Not much to say about that, other than I do dig the Emerson Skull on it.  And I don’t really do the whole Skull thing.  But this one is different than usual and different is cool.  The frame’s shape and the way your hand interfaces with the grip, keeps the clip from getting in the way or creating in hot spots which could cause problems if you are working with the knife a lot.  And really, what am I going to be doing that is real “Work” with this knife anyway?  Food Prep, Opening Packages, Slitting an unobservant sentry’s throat, maybe carve a cursed totem to leave as a warning to aboriginal natives that an Ogre now lives in this darkened place… Simple stuff, really.  Any more work than that, and I’ll use a fixed blade or coerced volunteered labor. 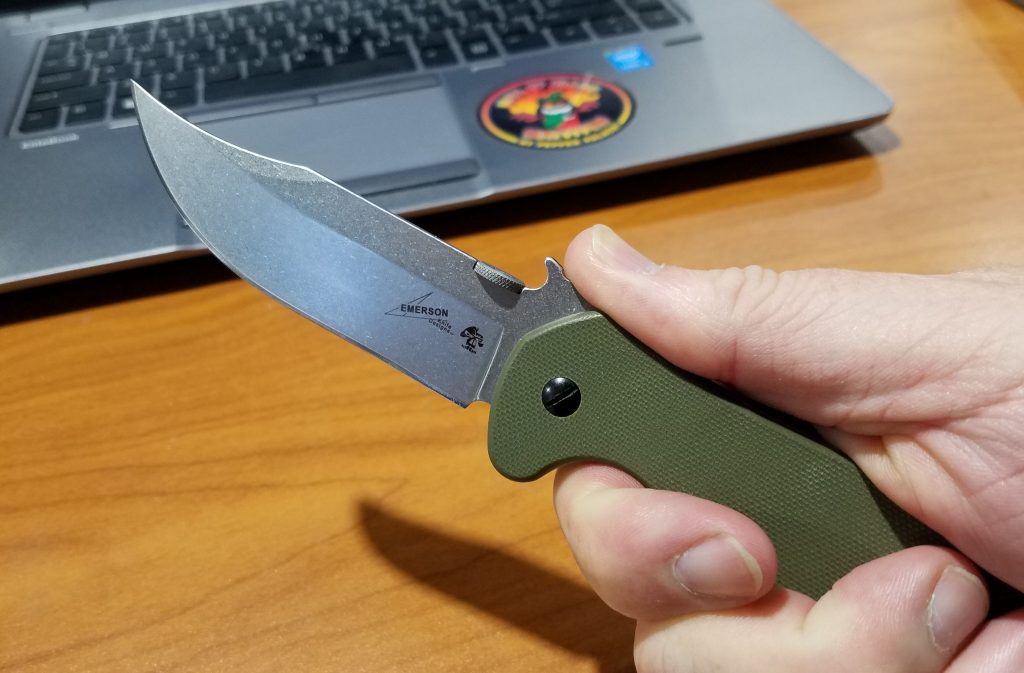 The knife is both big enough to fill the hand, and small and dainty enough to do fine work.  It’s a fabulous All-Rounder.  It’s one of those knives you just have to get in your hand to really appreciate.
Great looks, great feel, super smooth action, and instantaneous opening speed thanks to the wave.  This knife is my 3rd Favorite Folder.
You can shop around and find these for $30 bucks or even less.  Do it… Find one and order one.

One thought on “Kershaw Emerson CQC-10”