I’m done with some very bad fads that became all too common in the Gun Industry… Things that were heralded as being good or cool or tactical – but really are more of a pain in the ass than a help. 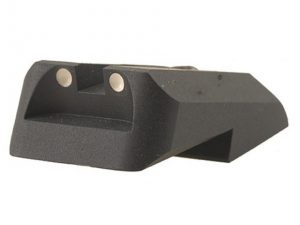 Ramp Sights.  When these came out forever ago, it was really the only step up from the GI rear sights on most 1911’s.  Because they were a cool looking alternative, and provided a good sight picture – they became popular.  They made 1 Hand manipulations a severe handicap, but back then everyone had GI length guide rods so it wasn’t that big of a deal.  But shortly after these came out, full length guide rods became popular as well.  Now, 1 Hand manipulations became more of a problem.  Then this autoloader cancer spread to other guns… Like the CZ-40… and I’ve seen them on a lot of others too… XD’s and M&P’s and other guns that have no place wearing Ramps.  The only gun I have that I don’t mind the Ramp Sight on – my Ruger GP100 Match Champion.  If I need to One Hand Rack the slide on my GP100 – I’m in big trouble.   But on a 1911?  These need to die in a fire.  I’ll never have one on any new auto pistol ever again.  Ever. 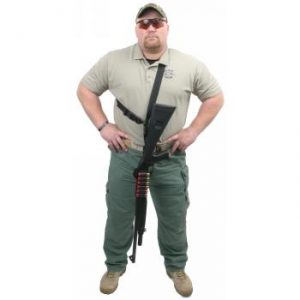 Single Point Slings.  These only have a place with Tactical Ted wannabe Operators who have never lived with a rifle in their hands all day long every day.  Sure – they might have a place in some situations.   But most of the time, a good adjustable two point sling will ultimately be a much better, more useful option.   Some slings that can go from Two to One point – fine.  That’s fine.  But I’ve racked my self in the nuts more times than I care to think about… and have had my rifle just be in the way more than it ever should have, simply because I was running a stupidass Single Point Sling.  Two is better than One.  Best things in life come in pairs.  Think about that. 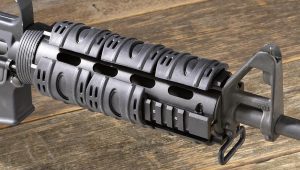 Quad Rails.   The idea of being able to easily attach something to your weapon is a good thing.  But quadrails are the Fax Machines of Firearms.  They need to stay the hell back in the 90’s and let’s just move forward with M-Lok or Key-Mod… I don’t care.   Or even proprietary screw on rail sections… that’s fine.  But Quad Rails just SUCK.  They are heavier than they need to be and they are very uncomfortable and then you add on covers and you just add more weight to them.  They are terrible.  A Picatinny rail across the top is perfect.  But anywhere else and your rifle is just… Faxed Up.   And if you have a free floating handguard that has a rail across the top – Let’s get rid of those fixed front sights.  The Triangle Front Sight on an AR should go the way of the Carry Handle.  And both should go where the Fax Machine needs to go.