As you guys know, I’m a Mormon.  I’ve said before that you guys should not look at me as an example of what a Mormon is, as I am not a very good one.   I’m trying to be better.  The Church of Jesus Christ of Latter Day Saints has always been a part of my life – even when I’ve not been active.  Even when I was far from Active I’ve always had a testimony of the Gospel of Jesus Christ.  I believe in God.  I believe Jesus was the Son of God.  I also believe when Jesus said in The Bible, in John 10:16:

And other sheep I have, which are not of this fold: them also I must bring, and they shall hear my voice; and there shall be one fold, and one shepherd. 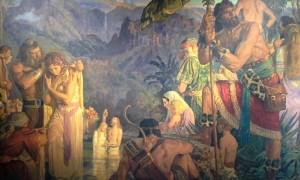 I believe he was talking about the people in the Americas, and that Jesus visited these people.   I believe The Book Of Mormon is a record of these people.

The LDS Church started out in Palmyra, NY.  This is where I am right now as I write this.  When I went out to Utah to visit family there and attend a wedding… we decided we wanted to back-track the Mormon Trail.  We went across Nebraska, and stopped at Winter Quarters.  We went from there to Nauvoo, where my wife and I went through the Temple there.  We took my boys to the blacksmith shop there in Nauvoo where John Browning did Blacksmithing and Gunsmithing.  John Browning was the Father of John Moses Browning, the father of Modern Small Arms.  (I am a descendant of Browning through the Stark line)  I wanted to give the Tour Guide a Tour… his illuminations on Browning was filled with incorrectness… but that’s beside the point.  The point is I and We have connection with Nauvoo that’s tangible.  At the Pageant there was a number of Scottish Bagpipers and drummers.  Listening to them stirred my soul.  My wife and I loved it so much… So did my boys.
From Nauvoo, we came to Palmyra and toured the Joseph Smith farm, the sacred grove, and of course the Hill Cumorah pageant.   The sacred grove is an amazing place.  It feels truly sacred in the same way it feels in the Temple.  It’s like an outdoor temple.   There’s a reverence that one should hold there.  It’s not for rowdy kids and loud voices… normal tourists with normal tourist behavior should not go there.   But if one can be respectful… then it’s worth the trip.  Because you can feel the sacred nature of the place.  It was tangible.   I know a lot of people that would do well to spend some time there.

This Journey was a special thing for me… to really get back in touch with LDS History… With MY history.  Because my History is LDS History.  And I am proud of that.   I’ve never denied that and I have never denied the Church.  Though I have had many issues with people in it.   Which is the main reason for past inactivity.

But then a fellow said something to me.  Travis, my Manager at Basin Sports, said “If someone is between you and God… Who’s closer?”  I dismissed the statement as soon as he finished saying it… but it didn’t go away.  It gnawed at me.  It haunted me.  Because it’s Truth.   With a great many implications that are not easy to deal with.  Statements like that are always easy to say but hard to swallow.    Getting back into the Church as an active member after being inactive for so long is… kinda like quitting smoking.   It sounds easy as if it’s just a choice… but it gnaws on your mind… the habits.  The thoughtless ritual of things that go into Smoking and make it difficult to stop.   Same with being inactive.   But I think this journey has really helped me.

I don’t preach on MadOgre.com.   And I don’t argue religion here either.  I will not Bible Bash on the Internet.  (ThoughI have and will Bible Bash in person, face to face.  I was a Missionary for my Church once.)  I only ask that you Respect my Faith as I Respect yours.  Capital R on Respect for a reason.  Capital F for Faith for the same reason.    Mutual Respect is important for civil conversation.   If you disagree with Mormon Doctrine, that is your choice.  If you want to talk about Mormon Doctrine, that’s fine too.  I will send a couple Missionaries to meet with you to discuss those things with you.   However if you want to pull out your Anti-Mormon biggotry and hate – I’ll just delete it with a simple click of the mouse.  Because I’ve heard it all before.  You will not say anything new or interesting or bring up matters that I’ve not considered before.   So don’t waste your time posting it, only to have me delete it offhand.  The LDS Church has asked us not to engage the protestors that stand outside of our Conference Hall and Temples and here at the Hill Cumorah Pageant.  So I walk by them…  I don’t have to put up with it here.  It’s not that I don’t like those people… I support anyone’s right to Free Speech.   But it’s just that I really really want to punch those guys right in their teeth.  I have to actively keep myself from throwing them a savage beating.  You see, I am still not a good Mormon… my instinct is to wreck them instead of forgive them.   Break them instead of bless them.   I have to Try Hard to not hurt them…  I fear that one day I will not try hard enough and one of those guys will get knocked to the dirt with a broken jaw.   Of course I know that such action is playing into their hand… They are like Palestinians.  Knowing that helps keep me from actually lashing out.    But they do so offend me.  The people in Nauvoo and Palmyra… the Non-Members who drove the Mormons out of their homes and businesses in the past are now profiting from Mormons who come back to visit…. Hotels and Cafes and everything else… They are making fortunes now, because of Mormons.   They once Tarred and Feathered us… Literally brought out the Torches and Pitchforks…   Now they roll out the welcome mats because of all the money that floods into the communities…

This journey has made me want to be a better Mormon.  It’s strengthened me and my faith.   It’s been a good thing.