Congratulations to the Open Carry Activists in Texas.   You got the rest of us all shut out of Chipolte like you wanted. 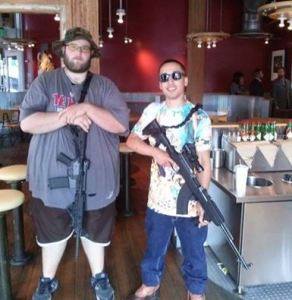 That is what you wanted, right?  Because, I mean, you guys did see what happened with Starbucks, right?  So getting us shunned at one of our favorite Burrito joints had to have been your goal.  Couldn’t you have picked a place we didn’t like to hold your Activism at?  Like Panera Bread, Checkers, Dairy Queen…

Seriously, you guys packing the AR-15’s everywhere… You are ruining Open Carry for Everyone.   The guys that insist Open Carry means they can walk around with AR-15’s and not cause problems – are causing problems. You guys are turning open carry into a 2nd Amendment Gay Rights Parade. Something no one cares about – but you throw it everyone’s faces and dare people to say something. I don’t care if you are gay… But Chaps and a Thong is not dignified attire to be out in public in. Same with an AR-15 Rifle. This isn’t Israel. This isn’t Baghdad. And you are not a PMC Contractor… What you are is an insensitive jerk throwing your rights in people’s faces at the expense of everyone else’s. That’s not the Libertarian Way.

You guys are not helping.

We want to make Open Carry a normal thing.  And within the gun rights community there is enough people who are actually advocating against OC, giving preference to Concealed Carry Only.   Me, I advocate “Carry”.  Open or Concealed, you are talking about the condition of your Shirt Tails, not the guns… but that’s not the question here.  That’s not the problem.  The problem is you Clownshoes who think you need to walk into the diner with a rifle.     You guys are going to bring down a lot more heat on the 2nd Amendment as a whole rather than get the Middle Ground Folks to come over to our side.   “Oh those guys in the Booney Hats and Shorts with the Scary Rifles… Those were Nice Guys!  I want to be like them!”   No, that’s not going to happen.  Instead you are going to turn those people who don’t mind guns – into people voting against guns.

If you gotta have your Rifle with you when you eat out – Go through the Drive Through!