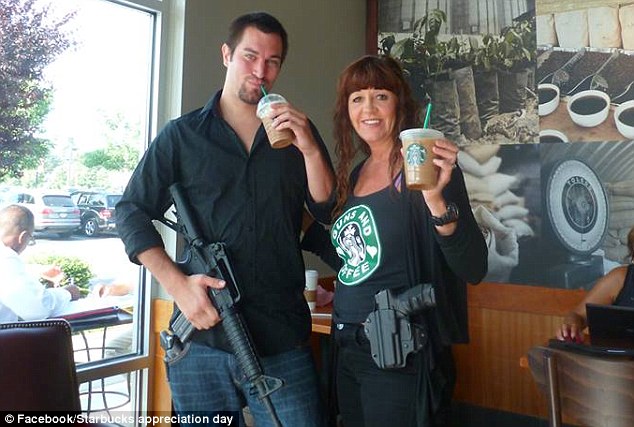 We shot ourselves in the foot over the Starbucks issue.  There are many articles and blog posts about Starbucks and Open Carry popping up all over the place.   Starbucks was never Pro-Gun.  They wanted to remain politically neutral on the issue.  The whole “We will follow the local law” policy was a smart one.  It didn’t take a side.  But so many people used their business as a political soapbox and forced them to take a side.

You guys don’t carry an AR-15 into the Gun Store to buy Ammo or a Cleaning Kit – Why the hell do you need to bring your AR-15 Rifle into a Coffee Shop for a cup of Caffeine?  Seriously, Why?  This is called Grandstanding.  Among other less kinder terms.  Because of this they had to, as politely as possible, ask you guys to stop.  And now some of you are excessively butthurt.   “Boycott Starbucks!” you’re yelling.   Boycott them for what?  For not wanting to be your Photo Op? Do you want people who you don’t know, bringing rifles and shotgun to your house or non-gun industry business? 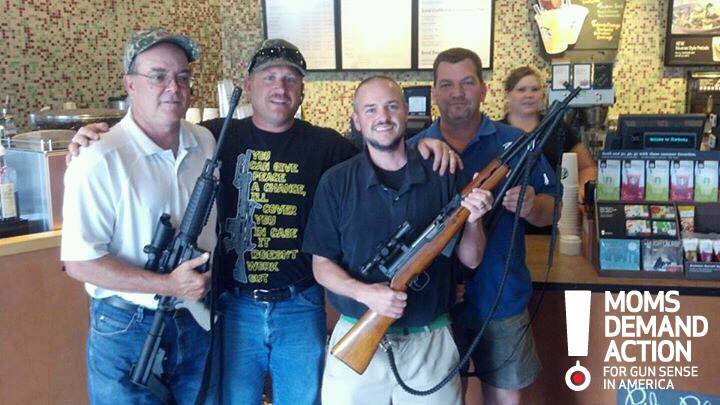 I don’t see guys taking pictures like this in front of Sporting Goods Stores.   I don’t see pictures like this in front of WalMart or Cabella’s.   Why do you think it’s appropriate inside a Coffee Shop, who’s Corporate HQ is in the heart of the Liberal Holy Land of Seattle Washington?  Honestly, what did you expect would come of this?   Where is the Moderation?  This morning I noticed driving past the Starbucks in town, the line was just as long today as it was the last couple of days.  They will remain in business.

I’m all for the Right to Carry.  I even advocate appropriate Open Carry on Armed American Radio when the Host and other guests are against Open Carry… I see their arguments against, and for the most part agree.   But there are times and places you can open carry just fine, and other times and places that it’s just unwise.   As a whole, we’ve been unwise when it came to Starbucks.  It went too far.  The whole “too much of a good thing” came into effect like a Triple Espresso with a side of Jolt Cola and a Rip It.

These pictures would be awesome in the right setting.  Enthusiasm for the cause we all love… but in a Starbucks?  GO TO THE RANGE!  Where’s the LOCAL GUN DEALER APPRECIATION DAY?

Update:  Some people have called my position cowardly.  So those of us who say taking an AR-15 into a Coffee Shop, just because it’s technically not illegal to do so yet, is pushing the boundaries of acceptable behavior, are cowards? Huh.Gentlemen, there is the problem. To get people to accept guns in polite society as acceptable, by pushing unacceptable behavior with extremism, is not winning anyone to our side. And as this case shows – worked against our cause rather than for it. The fact that so many Patriot Brothers can not see that is the problem.JUST ACT NORMAL. Open carry to make a political statement is not Open Carrying. It’s political grandstanding. And it’s counter productive. Instead of showing people “See, no one got killed by my AR here today”… how about showing people that Gun Owners are normal people like everyone else? How about that for a change? Let’s see how that works.

25 thoughts on “Guns, Coffee and Butthurt”