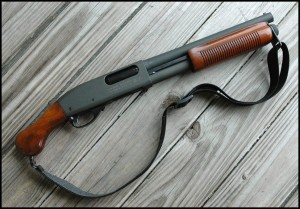 Shotguns remain the very best weapon ever devised for static defense situations.  Meaning Home Defense or Security.  But we’ve seen a trend that has people moving away from the Shotgun in other situations.  Such as your Truck Gun or Cruiser Gun.  Police have turned to Rifles, and SBR’s are becoming the gun of choice for Truck Guns.  And depending on where you are – this might not be a good thing.

The popularity of the AR-15 is unquestioned.  It’s become “America’s Rifle”, and by Right, it should be.  The AR-15 in it’s Militant Form has been serving the Nation as our Military’s main battle rifle for over 40 years.  It’s cool to have an AR-15 and it’s cool to deck out that rifle with all sorts of add-on expensive parts and upgrades and components… and to make it so it doesn’t actually look like an AR anymore.  That’s for the Cool Guys… but is it for you?  Is a 3,000 dollar rifle what you need to defend the castle?   Really?    Do you need to reach out to 600 Meters with a glorified .22 magnum?  Maybe you do.
When I lived in Vernal, Utah I most certainly could use that range and precision accuracy for defensive use.   Maybe.  In some Red Dawn Zombie Fantasy.  In reality… my actual defensive needs were maybe 50 yards max.   That’s 00 Buck range.  If I had to extend – realistically I’d only need 200 yards.  That’s Slug range.   I’m talking Defensive Use… I’m not talking precision sniper Hostage Rescue use.  That’s for Police.  For my buddies in the Sheriff’s Department with the well zeroed heavy rifles.   I can’t justify defensive use 200 yards away.

Reality dictates I need to stop a threat that’s trying to come into my home.  And that’s where Joe Biden’s suggestion is actually a good one.  Just buy a Shotgun.  He was absolutely right.   And then he threw that out the window with the two blasts in the air and the shooting through doors thing.  But he was right about buying a shotgun.

I’d rather buy a well used Remington 870 than anything else… that’s just me.

Get some good 3″ hunting loads for it… not the super cheap #7 or #8 Shot loads… those suck.  Get some good loads.  And test the shotgun for reliability.  If it cycles good, and isn’t knocking you on your tush… you’ve got the weapon you need.   NOW the fun part comes in.  Now you get to go find all the different 00 Buck Loads you can find.  A box or two of each.  And find maybe 3 or 4 different Slug Loads.   Now go out and find some big boxes like appliances come in.  Draw a circle or Tape a paper plate on the box…. several of them.   And get to testing.

Patterning your Shotgun is like Zeroing your Rifle.  Find the load that your Shotgun likes the best – not the load You like the best.  There’s a difference.  If your load is giving you a pattern that is empty in the center – that is not your load.  You want a nice spread across your impact zone.  For the slugs, you want point of aim, point of impact accuracy and consistency.    Once you find the loads that your gun likes the best – That’s the ammo you go stock up on.

It’s unbelievable to me that guys will buy a brand new shotgun and then buy a couple cases of the cheap birdshot ammo… and that’s it.  If you are buying a gun to go break clays with – fine.  But for a shotgun you are going to defend lives with?  That’s irresponsible.  Take everything you do for gun safety and professionalism – and throw it out the window.  Your gun is untested and unzeroed = that’s a NO GO.  Yet you do that with your shotgun?    That’s a Fail.  You need to know how your gun performs with the ammo you are going to use for defense.  And seriously #7.5 loads that have Clay Pigeons on the box is NOT your defensive ammo.  Or else it shouldnt be.   Ever.  The smallest you should use for defense in any situation is BB Shot.  Even in an Apartment or close packed trailer park.  And even then, I’d suggest #4 Buck.  The shell should also be “High Brass”.  Trap loads have aluminum bases with very short heads… During firing in some guns, that little bit of aluminum will expand out and create a lock ring in your chamber making ejection very difficult or it could jam the gun, requiring some serious pounding to get it unstuck.   I’ve seen that in many shotguns using that cheap ammo.  You want big pellets and high brass.  And quite frankly, the bigger the better.  Police agencies across the nation and around the world who use shotguns, use 00 Buck for a reason.   Go ask your local Sheriff’s what they recommend for shotguns or what they use.   Some may use Regular or #4 Buck… I know some that used to use 000 Buck before switching to rifles.  But the great majority use 00 Buck.

When it comes to slugs, you want to use a Brenneke or Foster type slug.  Brenneke slugs have a drag device on the back of them… an attached wadding or plastic tail to stabilize the slug.  A Foster will generally be rifled and have a hollow base.  Either one is suitable for your smooth bore, and will be shockingly accurate if you do your part.

The Slug type to avoid in a smoothbore gun is a SABOT.  Oh, I know they look cool as hell.  But they require a Rifled Bore.   If that’s what you have – by all means… but we’re talking defensive smoothbores here and with those, a SABOT is useless.  They will be less stable, less accurate and they are going to tumble in the air before they strike the target and wont perform like a giant hollowpoint bullet.   You are wasting your money on those.  From all the testing I’ve done with common slug shells… overall the Brenneke type slugs are consistently the most accurate.  Especially in the 3″ loads.  Your shoulders may want something else.  2 3/4″ Foster type slugs from Winchester or Remington are common and do quite well.  Reduced Recoil Tactical Slugs kick a lot less and are just fine out to 100 yards.   But buy some different types and try them out.

The shotgun is much more capable than most guys think.

27 thoughts on “Shotguns for Defense”