I’m going to run through all the major automakers in a series.  Since I’m driving a Chevy and my last cage before it was a Chevy, it only seems right.  So, let’s start at the bottom. 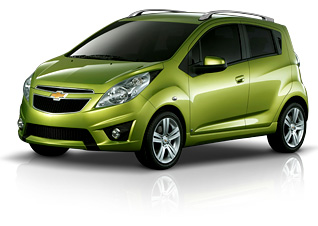 The 2014 Spark.  The Spark is designed to be an entry level city car.  Small, and economical… It’s a cheap car.  There are some comfort upgrades, but not many.  For what it is, it’s designed very well.  This is the spiritual successor to the Metro.  My wife bought one and we actually had it for a great many years.  That was a good solid little car and I would expect this to fill that nitch… so I understand the Spark. New for 2014 though is a new CVT automatic transmission.   That version is a total dog that gives up fuel economy, speed, acceleration, and makes the car feel a lot cheaper than it is.  Don’t get the CVT version.  Get the 5 speed Manual.  The car will be more fun and you’ll get more out of it.  And it will probably last a lot longer as well.
Here’s what Chevy needs to do with the Spark.  They need a Hot Hatch.  The Automotive Journalists like to compare the Spark to the Fiat 500.  Not the hotter Abarth version of the 500, just the base 500.  The Spark is better looking, with a better ride and a better interior.    Chevy needs to drop some Turbo into the Spark and call it the Hot Spark.   It needs some more energy.   It doesn’t have  a lot of room for bigger brakes, but some cross drilled rotors will help.  Body Paint the calipers on that.  Give it some aggressive suspension.  While doing that, give it some race styled wheels and some sticky rubber.  Offer the Hot Spark only in a 5 speed manual.   Have some fun with it.  Oh, and one last thing.  Put the Dash back onto the Dash and not the Steering Column.  The way it is now is kinda just stupid.  The half analog and half digital dash configuration… Just go all digital and call it good.  Please?

The Chevy Sonic is basically the bigger brother to the Spark.  Everything I said about the Spark can be applied to the Sonic.  The Sonic is slightly more expensive, slightly bigger, but not too much and it’s in fact “Just Right”.  I was initially thinking that the Sonic would be comparable to the Ford Focus or the VW Golf…  Unfortunately it isn’t.  It competes closer to the lesser Ford Fiesta, or a Dodge Dart.  There is a turbo version, but the 1.4 liter engine they put the turbo on is just not quite enough.  At least the Sonic is built in the United States, so I do like that.  A lot. Which means I like the Sonic a lot more than the Spark.  The Turbo version comes with a snarlier Borla exhaust.  This lets the Sonic make the right sounds, but it still isn’t making the right moves.  I think this is just a much nicer car all around than the Spark.
Again, there needs to be an angry version.  The Turbo doesn’t do enough for it because there just isn’t enough engine under it to make a lot of difference.  It also has that half analog and half digital type dash that the Sonic has – which really irritates me a great deal.  Give it an all digital dash.  Or a GTI style analog dash.   I have to say I really like the way the Sonic looks.  Chevy needs to up the trim levels into an SS version and really knock on the VW GTI, Focus ST doors.  Chevy – you can do it.  And it would be completely awesome.

Given the differences between the Spark and the Sonic… I’d just drop the Spark all together.  We don’t need to import a South Korean car to compete with the  Made in the USA Sonic.   The base versions of the Sonic and Spark are only like 2000 difference.  You can make the difference by dropping features to cheapen the Sonic down to Spark levels, and adding enough to really make the Sonic what it wants to be.  A Hot Hatch.

The Cruze is a solid little car.  It’s what the Chevy Cavalier used to be… Something for Rental Agencies, Municipal and Corporate Fleets, and Pencil Necks.   It’s a good looking car, for what it is.  It looks like it could be sporty.  It looks like it could compete with a Civic or Corolla or an Altima from 10 years ago.   It’s not a bad car and it’s very economical.  There’s a diesel version that’s new…  which will make this a great economical option for that want to just blend into the background… be one of the masses.  This is the anonymity for the Meek and Mild.  These are cars for Eunuchs and Librarians.   There is no sex appeal at all.  The Cruze is what replaced the Cobalt.  Which was a car that had a lot of spirit.  I really liked the Cobalt.  The Cruze though…  doesn’t have any of that spirit… none of the moxie.  It’s rather sad.  What makes it even more sad is that in other markets, there is a hatch version which actually looks badass. 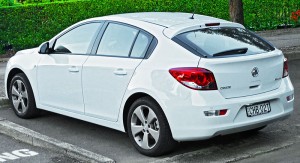 Not bad, eh?  Too bad… You can’t have one.  Which is a shame, because it really takes the Cruze up a notch.  Now here’s the thing… Chevy could amp the Cruze up if they wanted.  Add the Super tag to the Sonic and add it to the Cruze.   The Super Sonic and the Super Cruze.  Yes, SS versions.  The DNA is there.   Throw twin turbos on the Diesel (instead of the one small one) and slap a Duramax tag on there and give it a monster exhaust note.  With some good torque under the Diesel Cruze  it would have some machismo as well as good economy.  The Cruze doesn’t have to be a Bean Counter’s Ride.   Sure, have the versions that are all about being economical.  But give it some versions that EARN that BOWTIE BADGE.

The Malibu.  I’m not even going to post an image of the Malibu.  Drop the Malibu.  Just get rid of it.  Why?  Because you can have trim options of the Cruze that go up and the Impala that could go down that could overlap the Malibu and be done with it.  Maybe I’m biased… But I’ve always hated the Malibu.  I’ve hated the name, I’ve hated every time I’ve ridden in one, and every time I’ve driven one.  It makes the Cruze look like the good looking sister.   Just make the Malibu go away.  It really doesn’t fill any nitch.  It’s like that weird looking Ginger in the Butterfinger commercial.

I’m just not comfortable with that.

The Chevy Impala.  I love this car.  It’s one of my very favorite cars for 2014.  I could happily have one and drive it for the rest of my life.  I love it that much.   The Impala has been a name plate second only to the Camaro and Corvette in terms of Chevy Iconic Heritage… Because there has been some ultimate badass Impalas in Chevy’s history.
But the new Impala isn’t one of those.  It’s good though.  It’s very good.  Now, let’s take a quick look at the Caddy CTS Vsport.  Linking you here to a simple review from C&D.   The CTS Vsport and the Impala have the same base engine.  It’s the same engine that is in my Equinox.   It’s a good engine.  It’s a great engine for an entry level Impala.  But the CTS Vsport throws in twin turbochargers that bumps the power from just over 300 horses, to an impressive 420 angry warhorses.   The Impala needs this as an option.  And here’s why they should do this…
Chevy brought out the Camaro Z/28 for 2015 and in doing so they threw caution to the wind and said “screw it” to all conventional thinking.  They gave the Z/28 EVERYTHING they could.  From suspension and brakes to engine and transmission.  They crossed all the lines and turned a Muscle Car into what everyone dreams a muscle car could be.  It fulfilled the muscle car promise.  They didn’t care if it stepped on Corvette toes.  Screw it, they said.  Let the Corvette stand on its own merit.  No protected territory here.
Chevy needs to do that to the Impala and bring out an SS version.  Because every Car Guy is waiting for that.   So what if it steps on the toes of the Chevy SS… Let that car be it’s own thing – We’re talking about the freaking Chevy Impala here and that means something to a lot of people.   The Impala badge isn’t ready to retire to a Golf Course.  Not with this American Resurrection of the Muscle Car Era.

As far as the Chevy SS goes.  How come a factory Supercharger is not an option?  Where is the hood scoop and the Supercharger?  The Chevy SS is a car without Tradition.  Calling it just the “SS” I think was rather stupid.  Chevy’s history is that the SS was a Trim Level and not a Name Plate.  This was a Mistake.  People know what an Impala SS is… or a Chevelle SS.   But just as SS?  Where’s the Tradition?  Where’s the Heritage?  It’s just out from the wild blue, here’s a rebadged Pontiac.   That’s just wrong.  The SS needs to be rebadged as the Chevelle.  Think I’m wrong?  Take a look at this. 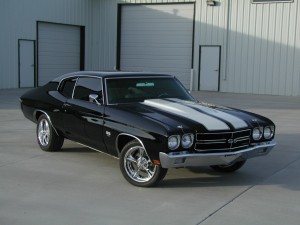 Look at that!  That’s the history Chevy should have touched on when they brought out the “SS”.  Give it the standard package that it has now… All Muscle Car… that’s good.  That’s the Chevelle.  Now add the SS badge to the new 2015 Chevelle and throw in a Supercharger.  And just for some fun – Hood Pins.  Because screw the Dodge Challenger, that’s why.  Freaking fake-ass Shaker hood scoop.  Give the Chevelle SS a real one.  The Commercial for it would be simple.  A tire scorching, mushroom cloud burnout for 60 seconds.  That’s it.  No spoken words… at the end of the commercial zoom in to the bowtie.  Done.

The Camaro – Keep it going, Chevy.  I want a turbo version though.  And I really do think you should drop all the V-6 versions unless they are turbocharged.  There should be no Mild versions of a Camaro.  Leave the watered down V-6 options for Dodge.  Every Camaro should be filled with hot sauce.

The Corvette – keep doing what you are doing.  You finally hit the nail on the head.

Coming up in Part 2, we’ll look at Chevy’s line of SUV’s and Trucks.