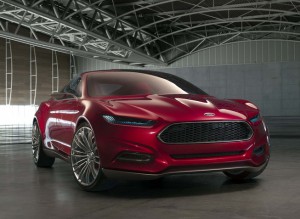 I’ve read the lamentations of the Ford Fans that the next Mustang is completely ditching it’s Retro styling.  At first I was myself concerned that Ford had lost it’s mind.  But then I watched a new Mustang roll past (I was sitting in a Wendy’s at the time) and I thought that it had very little Retro look to it anyways.   So not much is lost.  The new Mustangs don’t look like Mustangs and they sound like Honda Accords, so I’m not bothered by Ford chucking it and starting over.  This is ultimately going to be a very good thing for Ford.  The new 2015 Mustang looks sharp.  It looks like a performance car.  It looks like an Aston Martin, but that’s not a bad thing.   I have some optimism about the new Stang… with Ford’s new Engines, some new looks, I see a winner coming.  Especially since Ford has hinted at something the Mustang has always needed.  An Updated Suspension.   There is Hope For America!

All we need now is for Chevy to make the Vette a Mid-Engine car.