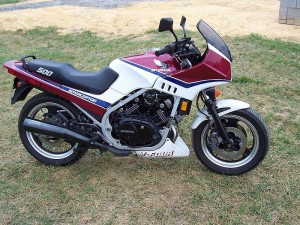 One of the motorcycles I had in the past and truly enjoyed, was the VFR.  It uses THAT engine… that one that I just can’t help but to love… Honda’s V-4.  Lots of power at the low revs, lots of power in the middle, and lots at the top.   Honda has put this engine in the Magna, and made them in a couple different sizes… all good.
My first was a 500CC, then later a 750, and then an 800.  The 500 wasn’t my first bike, my first bike was also a V-4… the Saber. 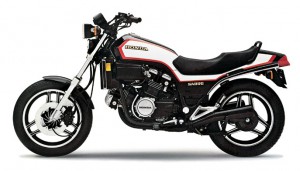 But the Saber pretty much became a cruiser, and Honda used the badge on the Shadow line of bikes… pity… But the V-4 lived on the Magna… I’ve had a few Magnas.  One of each Generation.  The last was the best, undoubtedly.
The Intercepter though… that became known simply as the VFR.  And it’s lived it’s life as a dedicated sports bike, then went the path of the Sports Touring as Honda decided to bring the inline-4 out as the dedicated sports machine.  I used to hate the CBR because of that.  It’s Commercial Airliner looking fairings and Non-V-4 engine.  The VFR kinda became tired.  The sporty looking bike for Old Guys.  Well, now I’m an Old Guy.  And it’s looking good.  It’s looking really good. 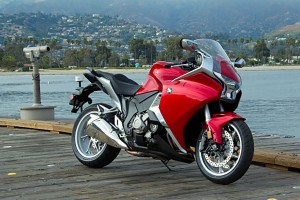 It’s not a perfect Sports Touring Bike… It has it’s flaws.  But it’s got some great points.  A new double clutch system, that V-4 engine in a 1200 sized Value Pack of Moto-Goodness.  It’s also fairly heavy, and people are saying it’s not as powerful as it should be.  But I think this is forgivable giving the fact that the power delivery is low and mid-range designed for what it’s for… Sports Touring.