I like this gun.  It felt very good in my hands, shot very accurately… Much closer to point of aim, point of impact for me… just ran “Good“. 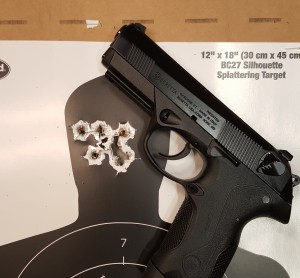 Good isn’t really the right word… Freaking Awesome is about right.  It felt freaking awesome.   I know the Storm isn’t a SIG or a 1911… But it’s a wonderful shooting gun.  10 rounds in the mag isn’t all that impressive, but the mag is smooth and easy to load and feels like its a higher quality piece than most other mags.
I don’t mind the Beretta Safety.  I even like it.  I don’t mind the DA/SA trigger.  I even like it.  I don’t mind the funky action – I really like it.  I’m weird that way.  But when you have a .45 that shoots like it’s launching Nerfs instead of 230 grain slugs… that’s something.  When you have a gun that puts the first 5 rounds into the same bloody hole, right where you wanted it to go – That’s awesome.  I know this group doesn’t look like its really all that much better than the Glock 30s’s group.  But the gun felt like I had much more control, and that I was placing my shots better…. It felt like that.  I knew where the bullet was going to go before I looked at the target.  I could call the shots with it.  Normally I can only really do that with a 220 or 1911… but I could with the Storm.
Now, the Storm is not up there like a SIG P220 is, or a nice 1911 is… But it’s right up there, real close.  I like this gun.  A lot.
The trigger pull could use some work.  It’s not all that smooth on the example I fired.  Which was a Range Rental Gun, that I think I was the first guy to try it out.