I’ve seen a lot of classic old cars lately.  One in particular stood out to me.  A GTO.  Everything good about Pontiac started out here. 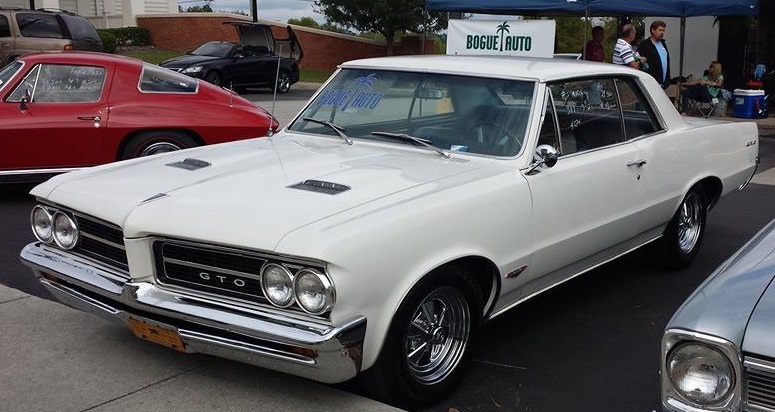 Small car, simple, reliable, clean lines, and a nice big fat powerful engine.  This is a winning formula.  But Pontiac drank the Koolaid of their own greatness, bowed to the pressures of Parent Company GM who force fed them crap like they were Tail End Charlie in The Human Centipede.   But Pontiac used to be good… and at times along the way, shown absolute brilliance.

Pontiac’s catch phrase was “We build excitement”, and after that was “Wider is Better”.  Unfortunately “Excitement” meant that they took something totally coma-inducingly boring, and threw on some plastic body cladding to make it wider.  This was utter failure on every level.  At no point now one had the guts to tell upper management that they were all complete idiots.  The G8 GXP was absolutely awesome.  But it came too late.  The 2004 GTO was the first time since 1967 that the Brand really looked at it’s self and said that they needed to get serious again.  Shortly there after, they brought out the Solstice.  Which was great, but was a close miss.  It was almost there.  The Solstice was also run as the Saturn Sky… Which was a solid hit.  Can you see the difference?  The Solstice looks like it was swollen from a food allergy, where the Sky looked lean and mean.  This small, light, efficient sports car may not have sold all that well, but they did sell to those that appreciated the concept.  The Sky’s are demanding a premium price still, where several of the Solistici that I’ve seen have been selling for a deeper discount.
But where did Pontiac go wrong?  What happened to that Excitement?  2001 happened.  Pontiac released the Aztek.  Worse yet, the Design Team of the Aztek was not abducted and executed by firing squad as a sacrifice to the Gear-Headed Gods of Horsepower and Torque.  Pontiac keep pushing the Aztek through 2005.  Which means they kept backing it and hoping that it would take off with a sudden appreciation for it and Dan Colen paintings.  I had a friend that was a Pontiac Salesman at a Dealership.  I asked him what the hell was wrong with Pontiac.  He just shook his head and quit the next day.  This was about 4 months after the Aztek had come out and landed at his dealership.  He had worked there for 12 years.

Another guy that left Pontiac –  John DeLorean.  He’s the guy that gave us the Pontiac GTO and tried to do many other awesome things at Pontiac until 1969, when he was sent to Chevy.  But when LeLorean left, that was the death knell for Pontiac since no one after him had enough balls to keep the brand alive.  Look what happened to Pontiac after he left… The Firefly, the 6000, the Sunburst, the Wave, the 3rd Gen “Tempest”… don’t even get me started on the Montana. And then that Aztek.

None of them had the Excitement that the Pontiac Badge tried to sell.
So where did Pontiac go wrong?  They didn’t find the next John DeLorean.  John went on to bigger and better things… He build the 1.21 Gigawatt Time Machines (that only produced a measly 130 horsepower at the wheels) and then he went and originated the Breaking Bad concept.
Pontiac needed a Rockstar Lead Singer… but never found another.  They were Guns and Roses after Axle left.  They were David Lee Roth after Van Halen left.  Pontiac was doomed.

GM should have set Pontiac apart from the rest… made them their performance marquee brand.  They really had something special and they crushed the life out of it, slowly, cruelly, like keeping an unloved child locked in a basement all it’s life, until it dies and gets buried in the back yard in the middle of the night.  Shame on you, GM.  Shame on you.