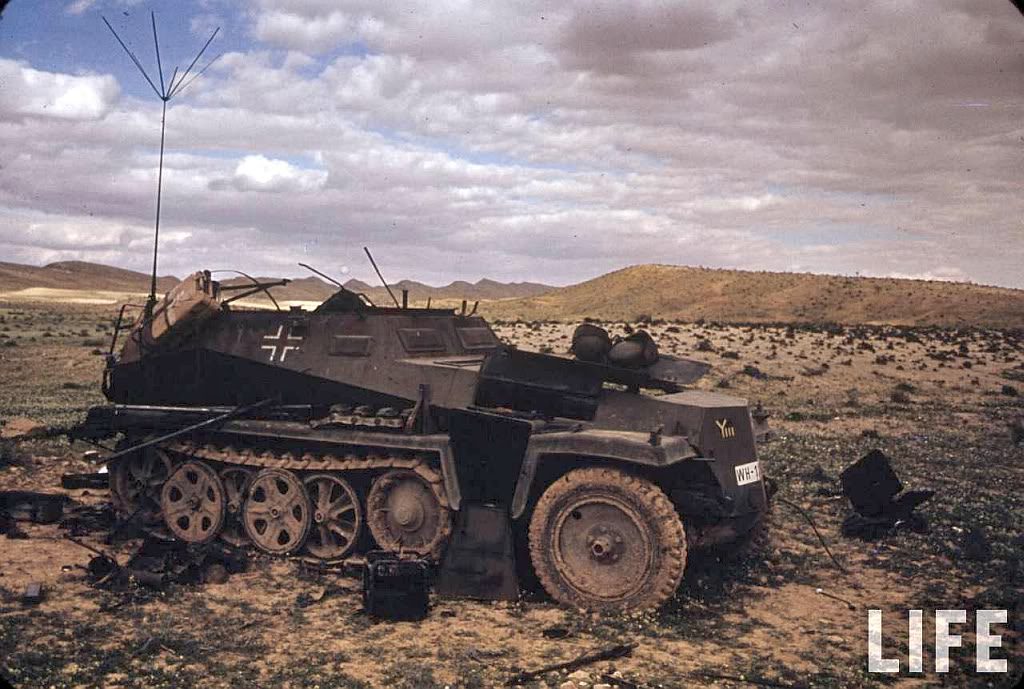 Sergeant Weston grabbed the small bundle of pants, shirt, and a jacket, and tossed them to the Lieutenant who started dressing as quickly as he could as he was just starting to shiver.   A few minutes later Trucks One and Two fired up their engines.  Weston fired up Anvil and Lt Clayton jumped in, pulling a woolen cap down over his ears.    END_OF_DOCUMENT_TOKEN_TO_BE_REPLACED 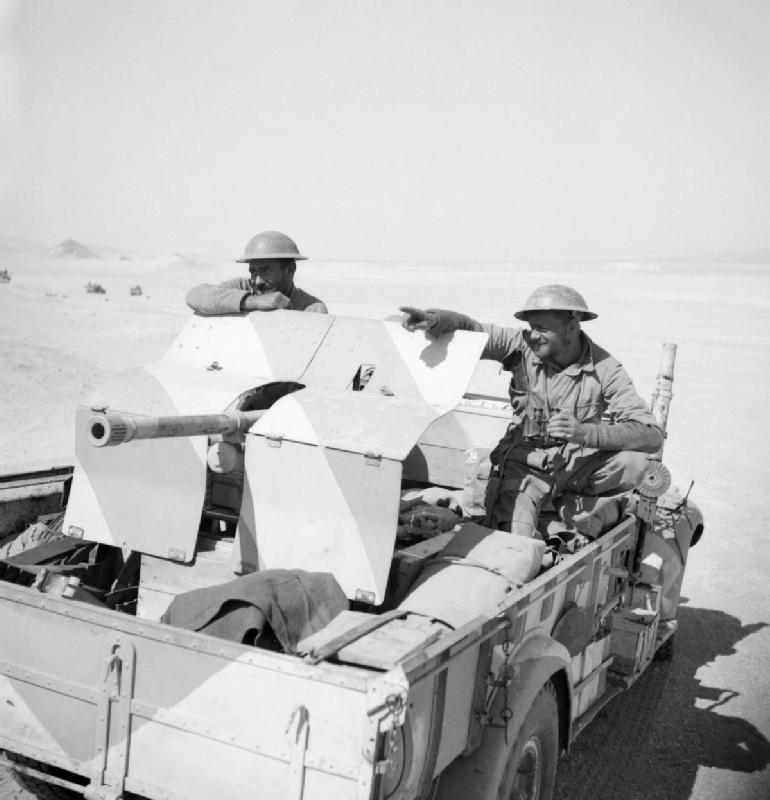 Night time in the desert isn’t what most people would think it’s like.   It can be scorching hot during the day, and absolutely freezing at night.    Geoffrey pulled the thick woolen blanket around his shoulders.   But that wasn’t what was irritating him.  Dale Collier snored like some large dying beast.   Full of volume and stuttering resonance, like Geoffrey had never heard before.  He looked over at Nathan.

Even in the dark, Nathan caught the glance and just shook his head.   “Let the lad be, Poulden.”  He said quietly.  “It’s best he gets what rest he can.  He’s cross when he doesn’t get enough… and then he burns through more ammo.”

Geoffrey nodded, consenting to the logic.   “What gets me is that he’s maybe only twelve stone at the most… but snores like a gigantic fat man.”

END_OF_DOCUMENT_TOKEN_TO_BE_REPLACED 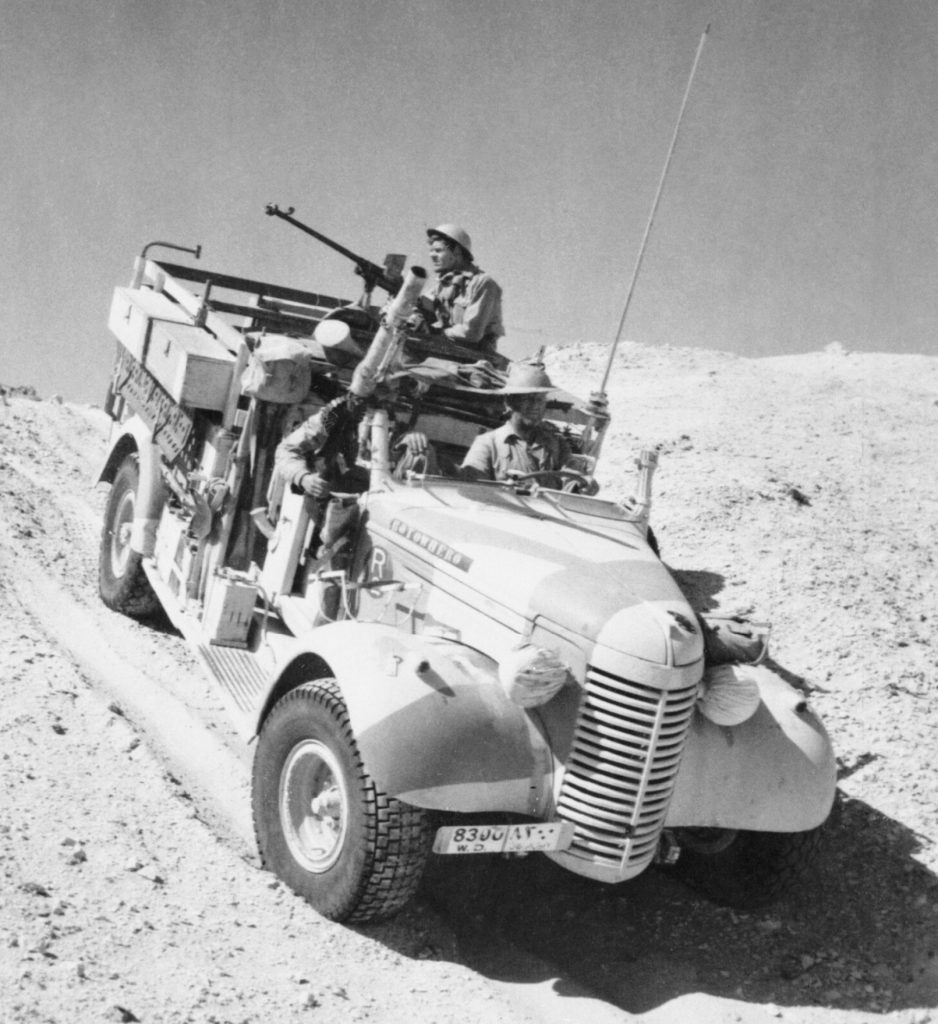 Captain Geoffrey Poulden double checked the Sun Compass to verify their heading.  It was crudely mounted above the dash right where the windshield would have been.  The trucks used to have the newer P8 compasses but those had been ruined some time ago, forcing them to use the old and still reliable Sun Compass.  The sun remained the most reliable thing the LRDG had.  Geoffrey glanced up.  It was still there, burning exposed skin, and bleaching everything else.   Thankfully, the second most reliable things they had were their trucks.

When these trucks arrived in North Africa, they were brand new Chevrolet WB 30 cwt 4×2, straight from Detroit.   Once they got into the hands of the New Zealanders that formed the original LRDG, hacksaws and cutting torches were used to remove the tops and anything that would be otherwise useless.  Then they were painted the same color as the desert sand.  After the trucks had been passed down from squadron to squadron to the Englishmen who formed “G” Patrol there was little of the original trucks left save for the frames.  As trucks broke down, they were cannibalized savagely to keep the rest of the trucks operational.   There are been seven trucks in Poulden’s squadron, and twenty five men.  Now it was down to three, crewed by nine.

The first truck was marked with a crudely painted scorpion in a circle, right in the center of the hood.  Geoffrey rode shotgun, while Staff Sergeant Nathaniel Allum drove, and Sergeant Dale Collier, the young man from Cambridge manned the new dual Browning fifty cal machine guns mounted in the back of the truck.  Geoffrey looked in the back and saw that Collier was fast asleep again on top of a pile of rolled camo netting.  Dale was good with the guns, and while he should be keeping an eye out for aircraft, Geoffrey let him sleep.  Dale had been awake longer than the rest of them, and they were still well within friendly territory.   It would be dark soon and it wouldn’t matter.  He wanted Dale to be well rested tomorrow come sunrise.  Because they would be deep in the desert with no support then… and the skies wouldn’t be trusted.

The second truck had Lieutenant, Eugene Baskett commanding, Staff Sergeant Roger Friedman driving, and Richard O’Carroll standing in the back of the truck holding on to his dual mounted, .303 caliber Vickers guns.  Richard looked like he was wiping them down with a rag.  They were good guns, but required a lot of care. Richard O’Carroll was probably the youngest man in the squadron, having come to the LRDG from the 2nd Lancers.  He was used to tanks instead of trucks, having trained extensively with the Crusader light tanks.  Fat lot of good that did him here, but along the way he learned how to run a Vickers K Machine Gun, so he was useful.  Their truck was also their Wireless Truck.  It had several long antennas and radio sets that worked well… most of the time.

The third truck was their Gun Truck, they called it Anvil.  Unlike the first two truck, Anvil was sporting a 37mm Bofors Anti-Tank gun.  Sergeant Roberto Goss was a wizard with it. They had tried to give him one of the captured Breda 20mm guns, but Roberto insisted that the Bofors were better and hit harder.  Most thought the Bredas were more accurate, but Roberto just laughed and asked when was the last time he missed.   No one could argue that point.  Roberto Goss never missed.   The gun truck was called the Anvil because when Roberto fired that Bofors, a few seconds later you would hear the loud “clang” of the shell slamming into target.  The gun might not be able to punch the newer Panzers, but anything lighter would be wrecked.    Roberto had made thousand yard hit on a moving German 232 Scout car.  One shot, one kill.  No one tried to take the Bofors away from him after that.

Staff Sergeant Logan Weston drove Anvil.  He was able to somehow keep Anvil from getting stuck even with the heavier weapon and ammunition she carried.    Lieutenant Philip Clayton was Anvil’s commander, and had a knack for positioning Anvil so Roberto had a good angle to biggest problems.  Philip had been given a wide brimmed Stetson hat from an American cavalry unit, and he’s worn it ever since.

Geoffrey was a little envious.  The hat was almost ridiculous, but it did good work keeping the sun out of Philip’s eyes and off his neck.  Like the rest of the men, Geoffrey wore the Arab style headgear called a keffiyeh, which was pretty much a scarf held to his head with some black rope called an agal.  It did fairly well in the heat, but a cowboy hat would be better, Geoffrey thought.

The men were laying around on top of supplies in improvised bunks and hammocks.  Each one was filthy looking, smelled of sweat and oil, and appeared to have forgotten what a razor was.  They had made some sort of hovel from parking three trucks together in a semi circle and used tarps to fashion a large but rudimentary tent.

Corporal Carter looked around at the men, offended by their lack of decorum and military bearing.  “Where is your Commanding Officer?  Who’s in charge here?”  Carter said, with a raised voice full of repudiation.

END_OF_DOCUMENT_TOKEN_TO_BE_REPLACED

Prologue:
“Where is he?  I can’t see the bastard!”  Wallace craned his head around, looking into the clouds and sun.
“He’s playing with us.”  Quinton moaned from the radio position, holding a rag against the hole in his gut.
Wallace looked back at the cockpit’s instruments.  He could see daylight through the holes.  The artificial horizon was drilled through and what was left of the compass had fallen out and was now behind the rudder pedals.  Most of the cockpit was splattered with blood.  Some of it was the Hendrick’s, the pilot. Some of it was his own.   The pink chunks of brain matter across the canopy was most likely all Hendrick’s as well.
The Lancaster shuddered.  This time, not from more hits, but from engine two, which had just failed.  He reached out to throttle back the damaged engine.  His whole arm burned from fingertips to shoulder.  The ragged hole through the forearm was a good indication of why his arm burned, and why that was all he could feel.  He saw his hand hit the throttles, but he didn’t feel them. Wallace concentrated and made his hand hook the lever and leaned back to pull it.  The lever moved some, but it was slick with blood and his hand slipped off.  He couldn’t grasp the lever enough to make it move anymore.
Wallace looked up through the shattered canopy and was about to say a prayer when he caught sight of the BF-109 that had been killing them.   It was directly above them.
“Look at that, Quinton.”  Wallace said.  “I found him.”
Quinton didn’t respond.
Wallace let out a sigh of resignation as the German fighter rolled in the air and dove.  He almost didn’t care anymore.  He saw the glittering of the muzzle flashes as it began it’s attack, but the firing stopped.
The BF-109 flashed passed the cockpit.  Wallace lost sight of it again so he turned his attention back to the flying the stricken aircraft.  The Lancaster was down to two engines, leaking all it’s fluids, leaving a trail of smoke, and was losing altitude by the minute with half its crew dead or dying.  Wallace tried to at least keep the wings level and the nose from pointing down, but his hand slipped again and fell back into his lap.  He felt so tired…
A glint of sunlight caught his attention outside again and he turned to look at the German fighter, just feet away.  The German pilot was clearly visible as he waved, and then curiously, peeled off and took a heading away from the British bomber.
“That’s it, bugger off now.”  He tried to laugh, but only coughed on the blood in his throat.
Wallace could only guess he had run out of ammunition.  Not that it mattered.  They were as good as dead anyways.   He looked out and saw they were down to about two thousand feet.  The only thing he could see below was rolling sand dunes of North Africa.  At least they wouldn’t drown.
Wallace tried to grab the yoke with both hands again. Only one reached it.  The other hand dangled from the arm that didn’t want to rise.  He looked down and saw the gaping hole in the leather jacket at the shoulder.  Blood was pouring from it at an alarming rate.  Not much he could do about it.
When he looked out again, out to the ground ahead.  He saw what looked like a dry lake bed.  Maybe he could put the Lancaster down there.  With the same effort as pushing a truck, Wallace pushed the left rudder pedal.  It moved only so slightly… but it was enough.  The lake bed was soon straight in front of him.
His eyes were heavy.  He wanted to sleep.
But he had to land the plane.
Don’t worry, he said to himself.  The plane would land all on its own… One way.  Or another.
He closed his eyes.