Yes, I’ve been quiet about the Bundy Ranch situation.   Fine… You want my opinion?

Bundy is a nutter and owes his grazing fees.  But he also has a point.  I believe the States should control their own land and not the Feds through the BLM.  I know a lot of guys that work for the BLM and they are good guys.  But in Nevada, they are over-stepping quite a bit.  Pulling back like they did was a smart move.  They had nothing to gain by pushing further.
Harry Reid is right when he said that this isn’t over.  The BLM will make their bones on this.  That much is for sure.  Because it’s BLM land, not Nevada land.  The Feds will get their due.  They are like the Lannisters from the Game of Thrones.

Does anyone really think this is about Turtles?  Does anyone really give a crap about the turtles?  Las Vegas is killing them because they have too many.  Even though they are “endangered”.  Really?  What’s really going on?

The BLM controls most of the western states.  This is patently wrong.  See the Feds made these huge land grabs by offering PILT deals.  Payments in lieu of Taxes.  The States turn over “unproductive” land to the Feds and get payments from the Feds in return.  “More than what they would earn in taxes” or so they said.  Utah took it.   And it so happens that the PILT money is a fraction of what they would be making on the revenue from the Mineral Rights… OIL MONEY.  Crude, Tar Sands, Oil Shale, Fracking… Black Gold… Texas Tea… And then all the Natural Gas on top of that.  Billions of dollars worth and the Feds pay out Pennies in PILT.  Nevada gets PILT payments as well.  How’s that working out for them?

Now, in Nevada, they don’t have as much oil as Utah.  Not like in the Uintah Basin.  But Harry Reid’s son has a solar energy deal with China… a deal that is supposed to happen on that contested land.   You can bet the farm – er – the Ranch… sorry… That Harry Reid is fully set and ready to destroy the Bundy’s so his son and he can make some bacon on that land the Bundy’s are raising beef on.  Reid is ready to go Full On Waco on the Bundy’s.  Yet that clown points a finger at the people that are saying “hey, that’s not right” and calls them Domestic Terrorists.  Well, I can’t say how I feel about Reid.  The G-Men would be knocking on my door if I did.

All I can say about this situation in Nevada is “Follow The Money”.  Who benefits from this?  Nevada?  No… Nevada doesn’t get nothing. 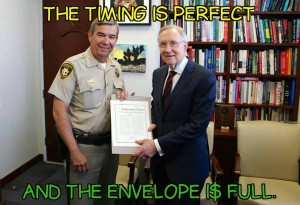 Huh…  Looks the Sheriff might be getting some scratch.  The Reid Family sure is.  But the people of Nevada are getting the thumb screws.  As are all of us…  Because this is a States Rights issue at the core of the Bundy’s arguement – and it’s an issue that needs to be looked at.

When I ran for office in 2010 in Utah, my platform had two key issues I wanted to push.  Taking Back Utah and Constitutional Carry.  Now, when I was running, the US Forrest Service had just shut down the majority of the routes through the Uintah Mountains.  Trails, Dirt Roads… basically all access to old family hunting grounds that the people of Uintah County had been hunting for generations.  I was there at the meetings and listened to the proposals and listened to the people – and let me tell you.  The Feds didn’t give a damn.  They had their goals to accomplish.  Keep everyone where they could be found easily.  “For their safety” and to keep the wear and tear down on the trails.  Yeah – by concentrating all that traffic in one big loop.  They never explained just how that works.

Horrible Harry has been bashing on Romney for not opening up his Tax Records to the Public.  Harry has hinted at possible Felony crimes – oh which Romney of course has never committed.   Most everything Romney has done is pretty much Public Record anyways.

But Not Harry Reid’s record.  Harry has never opened up his Tax Records to public scruitiny.  Which is a shame, because I am sure they would be far more interesting.  The National Review’s article on this matter is one everyone should read.  Especially everyone in Nevada.  “How Did Harry Reid Get Rich?”  One makes it most interesting to me is Harry’s Ties with someone that the FBI pretty much keeps an eye on because he’s about as shady as it gets.  It would surprise no one if Harry’s Business Buddy went to prison for a very long time.  Except he’s not ever going to go to Prison because he knows too much out Senator Harry Reid.  There is a mountain of Corruption that Harry has been standing on… and he has the audacity to point the finger at Mitt Romney.   Say what you will about Mitt Romney… he’s a dickhead, sure.  He’s a through and through Capitalist, sure.  That’s fine.  Mitt made his money the old fashioned way.  Harry Reid however has made it by means that seem to be highly questionable.

Here’s what sticks in my craw the most… Harry Reid remains Mormon, and from what I understand, remains a Mormon in good standing.  Rumor has it that he can even go to the Temple, which means he’s upholding all the LDS Standards according to our Faith.  But I don’t believe he is.  Here’s the other thing… freaking every time someone mentions Mitt Romney – they have to throw out there somewhere that he’s Mormon.  “Mitt Romney, the Mormon…”  Do they point out Religion when it comes to Reid?  No.  Why?  Because Reid doesn’t let his Faith get in the way.  In the way of what?  Here’s the deal… If I know the girl up the street got knocked up from say… a Rape… and I help her get an abortion… I’d be kicked out of the church.  That’s LDS Policy.  Doesn’t matter the reasons or situation around the abortion, if I am a party to it, I’m done.  Harry Reid has voted in support of Abortions for MILLIONS, and remains in good standing.  WTF?  No, seriously… WTF is up with that.  He’s voted YES on bills that pay for Abortions, he’s thrown his support, his political weight, behind something that would get me kicked out of the church.  He doesn’t live up to his faith… in fact, he’s working against it.

I don’t live up to my faith either – but I don’t work against it.  I’m proud to be Mormon, even if I’m not a good one.  I know my faults… I hate to actually go to church because I don’t feel worthy of it.  But I believe the gospel and I read the scriptures daily, and I pray.  (SHOCKER!)

I just ask one thing… If I can have one thing given to me by a Djin from a magic lamp… I would ask that I be allowed to kick Harry Reid… just once… In the balls while wearing my Icon 1000 Elsinore boots.  Just one swift kick to the junk.  That’s all I want.  Can I get a “Get out of Jail Free Card” for that?  A Legal Pass?  Kind of a Justice Department’s version of Catholic “Indulgences”?   “This Card is good for one Junk Punt on Harry Reid.”  I want that card.

Here’s the other thing I want.  I want to see Harry Reid’s Tax Records, from now and going all the way back till before he got into Politics.  I want to see how Harry Reid did it.  Going from a Poor Boy to a Rich Asshole while on the Public’s Dime.