Let me first start off by saying that it was a tremendous honor to have been asked to help out as one of the Staff at this year’s SLC MAG-40 Class. 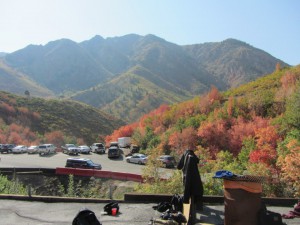 Last year I took the course as a Student.  This year, I was one of the Instructors, along with Joe, my partner with Crusader Weaponry and the Gun Dudes. The experience was very different.  In one hand, it was easy, as we didn’t try to take notes on everything said and worry about the final exams. On the other hand, there was some performance anxiety as all week we coached the students on the firing line, trying to help them improve their shooting.  On the last day, we all shot the Qualifier to show the students how its done and that we can do just what we say.  No Stress, right? 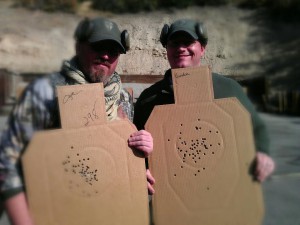 I came to the range with a knee that was larger in diameter than my thigh. It was rather painful.  By Saturday, it was mostly under control, so I decided to shoot the course of fire to include the kneeling portion.  To add to the pressure, Massad Ayoob was next to me on my left.   I shot great, right up to the point where we kneel.
You’ve heard the term “blinded by pain”? It felt like I was tazered in my knees, with the current going up my spine and out my eyes.  To say the least, I found this to by somewhat distracting.  This opened my group and let a couple rounds escape.  At the 15 yard line my group tightened back up, but the damage was done and I finished down two points.  298. Same as my score last year: 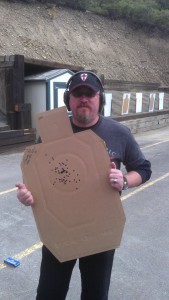 If it wasn’t for my knees, I know I’d have done a 300.
Joe gained some points from his score last year, as did all the Gun Dudes.  Tom tied me, shooting a 298 as well.  Not to be competitive or anything, Tom… but congratulations on shooting your best while I was at my worst.  😉  Just kidding, man.  And well done at the GSSF Match on Sunday.  I heard you did very well there!  Good job!  It needs to be said that all of the Gun Dudes are good Shooters and they did very well indeed. 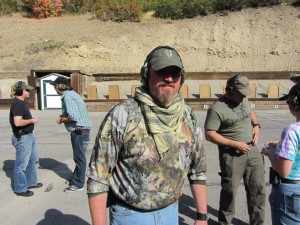 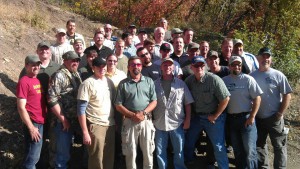 The best thing though this week was just spending time with our friends, the Gun Dudes, and the other Pod Casters.  The dinner at Rodizio Grill.  One of them, who I’ll be linking up shortly was Trevor Furlotte who came down from Canada for the course.  He was the only guy to shoot a solid 300 btw. 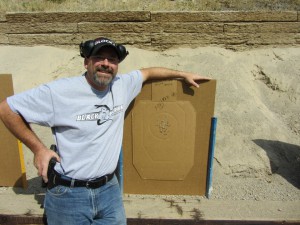 Anyways, he and Jason from Tactical Solutions had never been to a Rodizio before, and Rodizio did not disappoint.  Waiting for a table, Trevor was looking at the menu.  “This sounds good”.  He said a couple times, as he was trying to decide what he was going to have.  “No, they’ll bring it to you… all of it.”  We tried to explain.  “You mean, like Appetizers?”  He asked.  “No… just wait.  And buckle up.”
At the Table the Server started going over things and our brave Canadian said “Just shut up and bring on the Meat!”
And they did.  It was a hurricane of meat… A Meaticane.  Trevor’s eyes were the size of X-Rings.   Jason, having never been there either was staggered as well.    We feasted…. Gorged ourselves on grilled meats of all varieties.   The Bacon Wrapped Turkey was a favorite as well as the Tenderloin.  As the gluttony started to slow down, Chaz was set up as a Birthday Boy and the Gouchos with the swords of meat all came over and sang Rodizios version of Happy Birthday to the beats of a Bongo Drum.  Chaz, had to get up and start dancing to the music… it was so funny that Gun Dude’s Carl started laughing so hard he had meat coming out his nose like a Meat Grinder.
It was a great evening.  The next morning Joe said “What a great bunch of guys to get the Meat Sweats with.”  A statement that was almost as funny as Chaz’s dance.

1.  Massad Ayoob is still a scary good shot, a Gentleman and a Scholar… albeit a salty one.
2.  There were some problems with some of the guns on the range.  An XD was giving one shooter fits, but I think it was ammo related as he did have a Squib Load that required disassembly and a punch to get the projectile out of the bore.  All three 1911’s had the full spectrum of problems.  One was simple occasional failures to fully chamber, another was Gun Dude’s Carl, who’s filthy Springfield XD required complete take down and cleaning to get back into a working form.  Now, I’m not a 1911 Hater, I’m just objective.  The problem I believe is the trend to make a 1911 too goram tight.  A little loser in the tolerances and they seem to be less finicky.  For example, my old Springer GI.  Runs great.  Any number of Kimbers I’ve seen, much tighter, and they jam like jazz bands.  Take that for what you will.  Either way, I shoot my 1911’s for fun, my Glocks for more serious use. 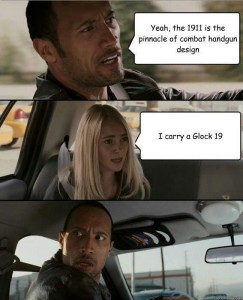 None of the Glocks had any problems.  Say what you will about the Glock’s look or Grip Angle, but the gun simply works.
3.  We tested out some ammo from a new outfit called Freedom Munitions.  We had some Ball and HP to try out.  It all  shot very well.  The Hollowpoint .40 I tried… Shot a water bottle with it and then dug out the bullet.  It expanded very well.  Accuracy with this ammo, well, the best groups I got all week were with this ammo.  It felt very consistent. I will be buying more.  They have some very good pricing as well, so look into these guys.

I think the Gun Dudes are just awesome… But they don’t have Goatees.  It’s a well known fact that Goatees make a man shoot better.  At the MAG-40 Class, Carl was trying to grow one out.  But he started too late so he only had a Proto-Goatee.  Which wasn’t enough to help him.  We hope he continues to grow it out.  He’d had out-shot Gail if he had a full power Goat going on.

Check out the latest Gun Dudes Podcast here:
http://www.gundudes.com/Home_Page_ETY8.html
What’s awesome about this one, is that they have a great interview with Joe Chetwood, aka “Gundoc”, and the head honcho of CRUSADER WEAPONRY. These guys are having too much fun, you can hear it. Listen to this show, you wont be disappointed!